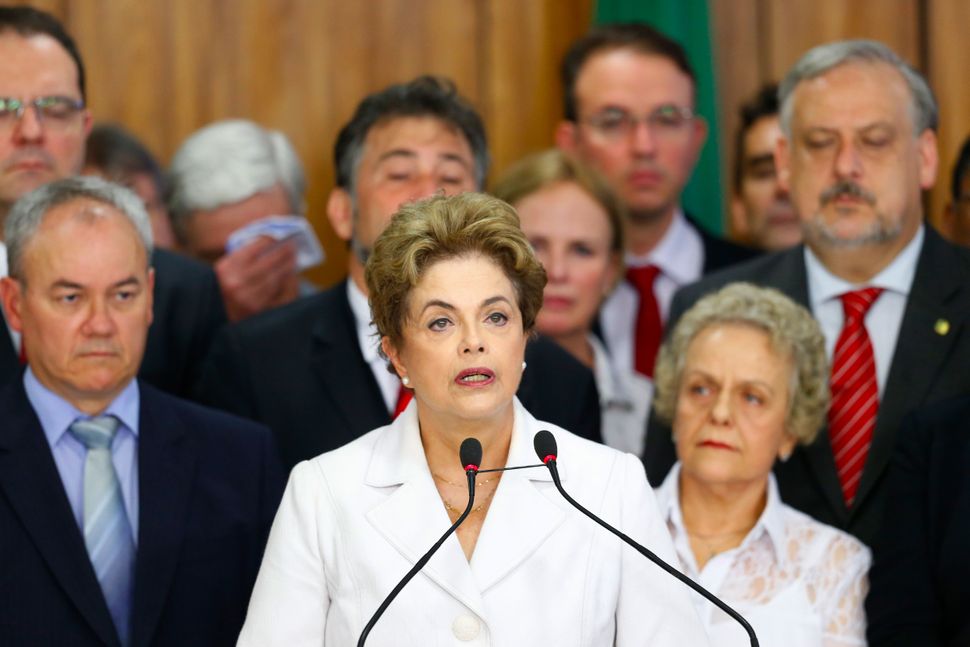 Dilma Rousseff speaks to supporters at the Planalto presidential palace on May 12, 2016 in Brasilia, Brazil. Image by Getty Images

“In times of crisis, the Jewish people are historically designated as ‘guilty’ for the evil that does not concern it. And history is repeated,” Israel’s honorary consul in Rio, Osias Wurman, told JTA on Thursday.

The Brazilian Israelite Confederation, the country’s umbrella Jewish organization, condemned the comparison in a

Sen. Roberto Requiao proposed last week that Brazil follow Nazi Germany’s example to handle the economy. He used the Adolf Hitler archetype to defend Rousseff’s illegal maneuvers to mask a perilous budget deficit, which led last Friday to her suspension for 180 days and the naming of her centrist vice president, Michel Temer, to replace her.

On May 16, far-left Sen. Lindbergh Farias suggested on his Facebook page that Temer inspired his debut speech last week in Parliament in which he mocked the “Arbeit macht frei” (Work will set you free) sign over the entrance gate at Auschwitz.

Farias, who has nearly 365,000 followers and is among those who call the suspension process of Rousseff a coup d’etat, published Monday an Auschwitz gate photo above a street billboard in the city of Campo Grande with the slogan “Don’t think about crisis. Work.”

“Auschwitz was the biggest extermination machine in the history of humankind. The cynical inscription at its entrance sums up one of the lowest points that a political regime can get, when it’s guided by prejudice and intolerance,” the Brazilian Israelite Confederation said.

“Such a context does not resemble at all the current Brazilian scenario. The attempt to compare the Holocaust to our political matters does not only minimize and vulgarize the immeasurable evil perpetrated by the Nazis but also deeply disrespects the memory of the victims and the survivors of this tragedy.”

Last month, Rousseff, compared attempts to impeach her over corruption scandals to the Nazi persecution of Jews.