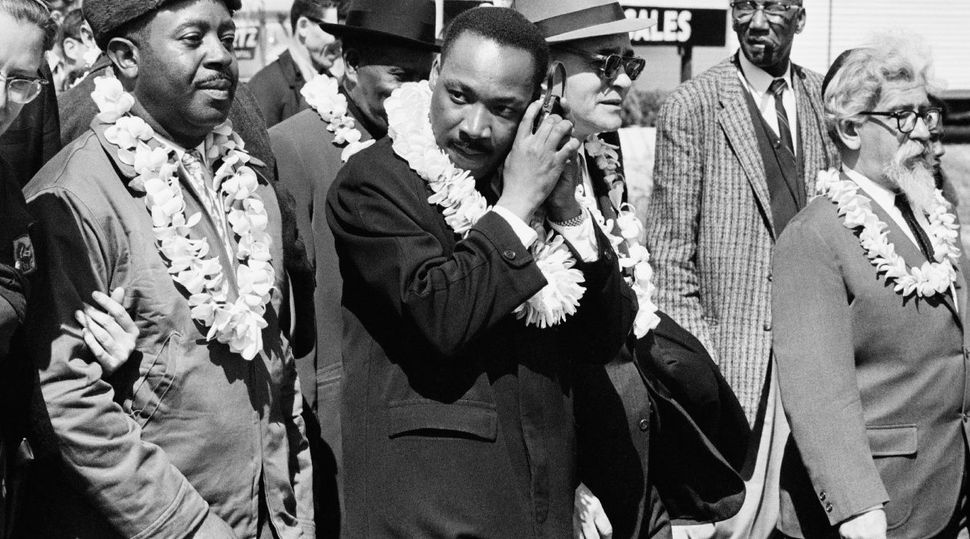 The letter made public Wednesday, spearheaded by Sen. Sherrod Brown, D-Ohio, cited the role of Heschel, who fled Nazi-era Germany, in advancing the cause of civil rights through his friendship with the Rev. Martin Luther King Jr.

“In 1963, Rabbi Heschel met Rev. Dr. Martin Luther King, Jr., and the two forged a deep friendship sharing theological and political ideas —Dr. King even came to refer to Rabbi Heschel as ‘my rabbi,’” said the letter. “Before an interfaith gathering on ‘Religion and Race,’ Rabbi Heschel declared that ‘racism is Satanism, unmitigated evil.’ Later that year, he sent a telegram to President Kennedy, asking him to declare a state of ‘moral emergency’ of racial inequality in the United States.”

Heschel, a scholar at the Conservative movement’s Jewish Theological Seminary, joined King for his third attempt at a march in 1963 between Selma and Montgomery, Alabama, to protest segregation. Police viciously beat marchers in the first attempt, and King stopped the second march, fearing a repeat. Heschel had led a demonstration at FBI headquarters in Washington, D.C., demanding protection for the marchers.

A photograph of Heschel carrying a Torah scroll while marching alongside King immortalized the third march.

“I felt my legs were praying,” Heschel later wrote.

King was scheduled to spend the Passover seder with Heschel in 1968; he was gunned down days earlier. Heschel died in 1972.

Among the senators who signed the letter, all but one — Johnny Isakson, a Republican from Georgia — caucus with Democrats. Among the Democrats is the body’s entire Jewish caucus, which includes Sen. Bernie Sanders, I-Vt., a Democratic candidate for president. Others are Sens. Barbara Boxer and Dianne Feinstein of California; Al Franken of Minnesota; Brian Schatz of Hawaii; Richard Blumenthal of Connecticut; Charles Schumer of New York; Ron Wyden of Oregon, and Ben Cardin of Maryland.

“In considering his significant contribution to the Civil Rights Movement, his work to advocate for racial equality and justice across all faiths, and his work to encourage interfaith dialogue, we believe Rabbi Heschel exemplifies the best of American values,” the letter said. “We urge you to consider honoring his life by awarding Rabbi Heschel with the Presidential Medal of Freedom posthumously.”

The initiative has the backing of Heschel’s daughter Susannah, who is also a scholar of Judaism.