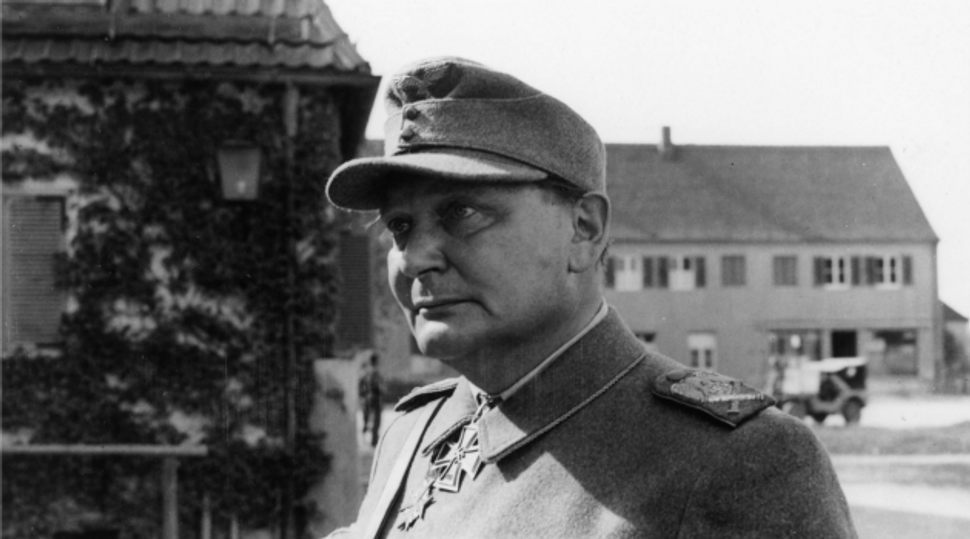 — An auction of Nazi memorabilia in Munich includes underpants worn by Hermann Goering and socks worn by Adolf Hitler.

The auction scheduled for this weekend at the Herman Historica International auction house also includes the case that held the cyanide capsule Goering used to take his life the night before he was scheduled to be hanged in 1946, following his conviction on charges  of war crimes and crimes against humanity at the Nuremberg trials.

The memorabilia is part of a collection owned by John Kingsley Lattimer, an American doctor who served as a medical officer during the War Crimes Trials in Nuremberg, where he cared for the prisoners as well as members of the allied forces staff.  He collected many of the artifacts during his time at the trials, according to the auction catalogue.

The collection also includes  X-rays and the investigation reports on Hitler’s health after the assassination attempt of  July 20,1944 and the statements of Hitler’s doctors, as well as a collection of original secret wiretap transcripts of the prisoners at Nuremberg; a large-size photo album presented to a member of the 3rd US Army; more than 330 contemporary photographs of German secret documents from the property of Dr. Robert Kempner; Robert H. Jackson’s judge’s gavel given as a present to his successor as chief prosecutor in Nuremberg, Thomas J. Dodd; and a group of sections of the ropes used to hang the major war criminals at their execution on  Oct. 16 1946.

Goering’s underpants,  silk with a blue monogram reading HG, is offered at a starting price of $700. Bidding on Goering’s brass cyanide capsule case will start at about $3,500.

Jewish groups have condemned the auction, and the mayor of Munich has asked the auction house to cancel it, fearing the objects will be glorified by neo-Nazis, the Telegraph reported.

The auction house responded on its website, saying it is “a reputable, internationally renowned auction house for historical objects of all ages and countries and we are perfectly aware of our responsibility for objects of contemporary German history and have always been committed to the utmost care and caution in acting as an intermediary for them.”

The statement continued: “Hermann Historica procures objects of contemporary German history only under strict conditions for museums, archives and serious collectors – an indispensable and important work that museums and collections gives an opportunity to purchase historical documents to a better understanding of that period and thereby help that nothing like that again may repeat. Objects of our auctions are located worldwide in major museums and collections, a taboo of this part of history would only lead to a non-transparent market.”