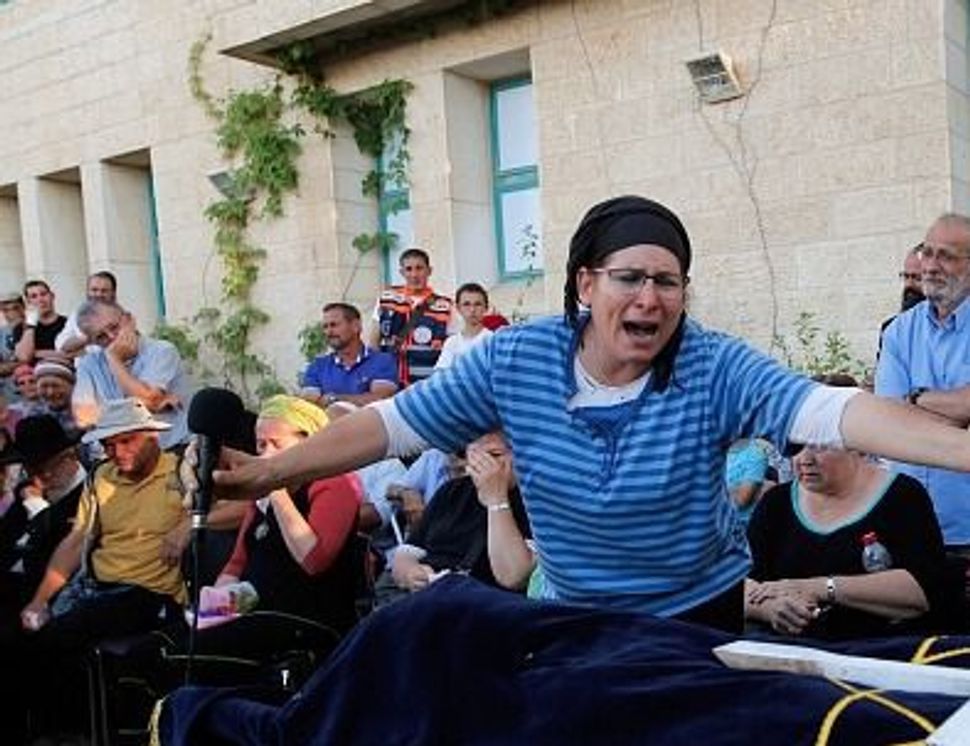 Israeli Rina Yaffa Ariel, mourns over the body of her daughter Hallel, a 13-year-old girl who was fatally stabbed by a Palestinian attacker in her home, during her funeral in the Kiryat Arba settlement outside the Israeli occupied city of Hebron on June 30, 2016. Image by Getty

JERUSALEM — The mother of Hallel Yaffa Ariel, the 13-year-old Jewish girl killed in her bed, requested permission to bring 250 people to the Temple Mount to hold a memorial ceremony for her daughter.

Rina Ariel asked permission from Prime Minister Benjamin Netanyahu. The group that would ascend to the Temple Mount on Tuesday would include the Ariel family and a group of friends and supporters, Ynet reported.

“We and Hallel have always felt a deep connection to the Temple Mount. We visited it and will continue to do so, as we believe that it is the house of God, and that it gives strength and life to each and every house in Israel. And as it is only from there that all deficits can be filled, it is only from there that we will receive any sense of solace. For this reason we are asking to perform the mitzvah of visiting the Temple Mount and praying there for the ascent of Hallel’s soul this coming Tuesday, with 250 people who have pledged to join and comfort us. It is very important to me that the event be coordinated with the police and not carried out in any manner of confrontation,” Rina Ariel said in a letter to Netanyahu, Ynet reported.

“Just recently, 200,000 Muslims performed a mass prayer at the site. Would a Jewish group comprised of a tenth of that number not be allowed to convene there for a single hour?”

Hallel was stabbed to death on the morning of June 30 as she slept in her bed in the West Bank settlement of Kiryat Arba by a 17-year old Palestinian assailant from a nearby village. Civillian guards shot and killed the attacker.