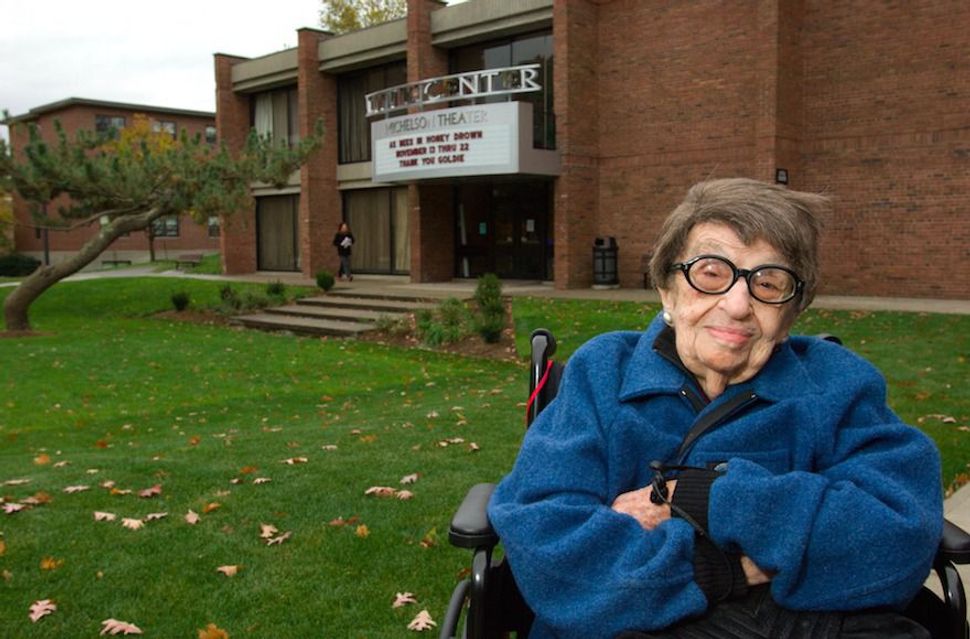 The oldest American, Goldie Michelson of Worcester, Massachusetts, has died at the age of 113 and 11 months.

Michelson, the daughter of Russian Jewish parents who immigrated with her family to Worcester when she was 2, died at home Friday.

Born in 1902, she lived for 113 years and 335 days — nearly all of it in Worcester — and her age was a source of pride, the Boston Globe reported. Michelson credited her longevity to walking.

Michelson (nee Corash) was named the oldest living American in May.

She graduated from Pembroke College, which later became the Women’s College of Brown University, and received a master’s degree in sociology from Clark University in Worcester. Her thesis at Clark was titled “A Citizenship Survey of Worcester Jewry” and examined why many of the city’s older Jewish-immigrant residents did not pursue American citizenship or learn English.

She told the Worcester Telegram in 2012 that her thesis was inspired by her time working with Jewish women’s organizations such as Hadassah and the National Council of Jewish Women.

After the borders of the Soviet Union opened up for Jews in 1989, a new wave of Jewish immigrants came to Worcester. Michelson was among the volunteers to help them settle in and accustom themselves to American society.

Michelson was also active in community groups, including one that supported the founding of Brandeis University.

After graduating from college, she was a social worker in Worcester, and went on to teach religious education and direct plays at a local synagogue. She married David Michelson, a friend of her brother.

Michelson acted and directed nearly all her life — she directed a pageant performance of “Fiddler on the Roof” when she was nearly 100.

Her husband, a businessman who developed medical office buildings, died in 1974.

After his death, Michelson endowed the Michelson Theater and the David and Goldie Michelson Drama Fund at Clark University.

“It never occurred to me that I would live this long,” Michelson told Clark University’s magazine in 2012. “I just went on and on, and I’ve loved it.”