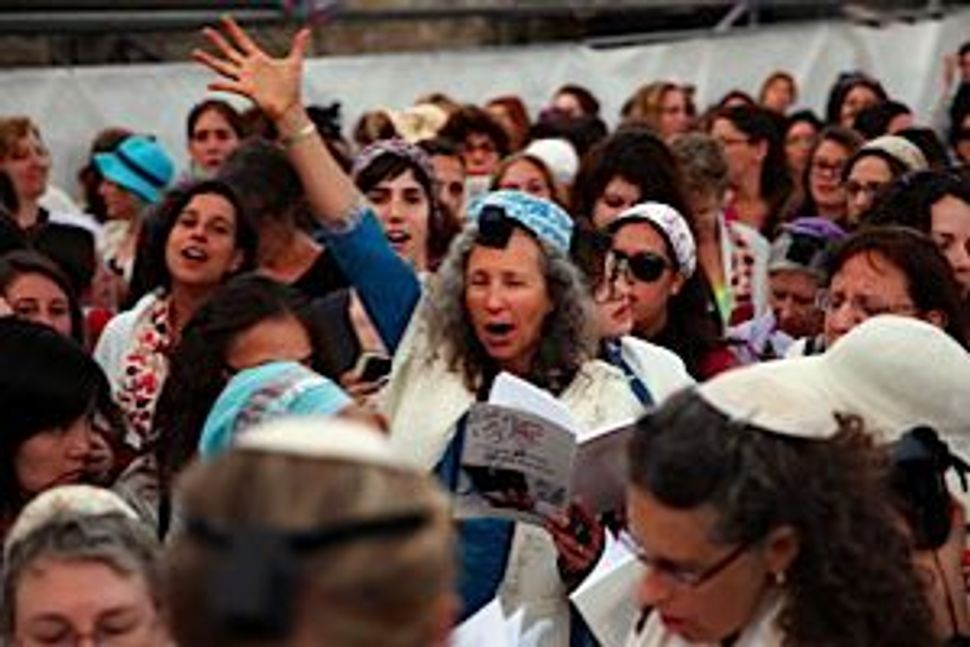 Rosh Chodesh services held by Women of the Wall included an emotional reading of Hallel, a collection of psalms. Image by Getty Images

JERUSALEM — The negotiating team supporting the implementation of the agreement to create an egalitarian prayer space at the Western Wall said in a letter that it is planning to initiate legal action in Israel’s Supreme Court.

In the letter sent Sunday to Israeli Prime Minister Benjamin Netanyahu, the negotiating team, including representatives of the Conservative and Reform movements of Judaism and of the Women of the Wall organization, said court action was needed to move the process forward.

It said that developments, including the lack of real progress in implementing the government decision regarding an egalitarian section at the Western Wall, as well as government’s intention to continue with legislating who can use public mikvahs and the “ongoing and unprecedented incitement” towards Conservative and Reform Jews by Israeli lawmakers, “bring us to a critical juncture and are already having a serious impact on the vital relationship between the State of Israel and world Jewry.”

The committee last met with Netanyahu in his office on June 1, according to the letter.

The letter noted that elements of the agreement for a prayer space on the southern plaza of the Kotel, including access, funding, recognition, and oversight of the egalitarian, pluralistic prayer space, are “all essential elements of the agreement,” that were “the result of years of negotiation and compromise.” It points out that the Cabinet voted to approve the agreement and that the haredi Orthodox parties are obligated to uphold the government’s decision.

“But to date they remain unwilling to agree to even a part of this carefully negotiated compromise, which affirms that there is a place for every Jew at the Kotel,” the letter said.

It continued: “You tried to reassure us by saying that soon, your team at the PMO (Prime Minister’s Office) would begin implementing some of the physical aspects of the agreement, even without commitment for the entire agreement. We said then, and feel even more strongly now, that this would be a serious mistake. Such a tactic would undermine, rather than advance, our historic agreement.”

The letter informed Netanyahu that in what it calls the “very near future” the groups represented by the team will bring a petition to Israel’s Supreme Court demanding the reapportionment of the current northern plaza prayer area in front of the wall to three sections: men, women and mixed.

The letter added that the group will continue to hold mixed prayer services in the upper plaza of the Western Wall, despite the attorney general upholding the objections of Rabbi of the Western Wall Shmuel Rabinowitz, and that it expected police protection from protesters and hecklers.

“We appreciate the commitment you expressed to implementing the Kotel agreement, yet we expect you to close the gap between your statements and the actions of your government. We look forward to the day when headlines feature not hateful, demeaning stories of ultra-Orthodox intransigence but rather how PM Netanyahu courageously led the Israeli government to affirm the multiple ways Jews express their Jewish commitment at our people’s holiest site,” the letter said.