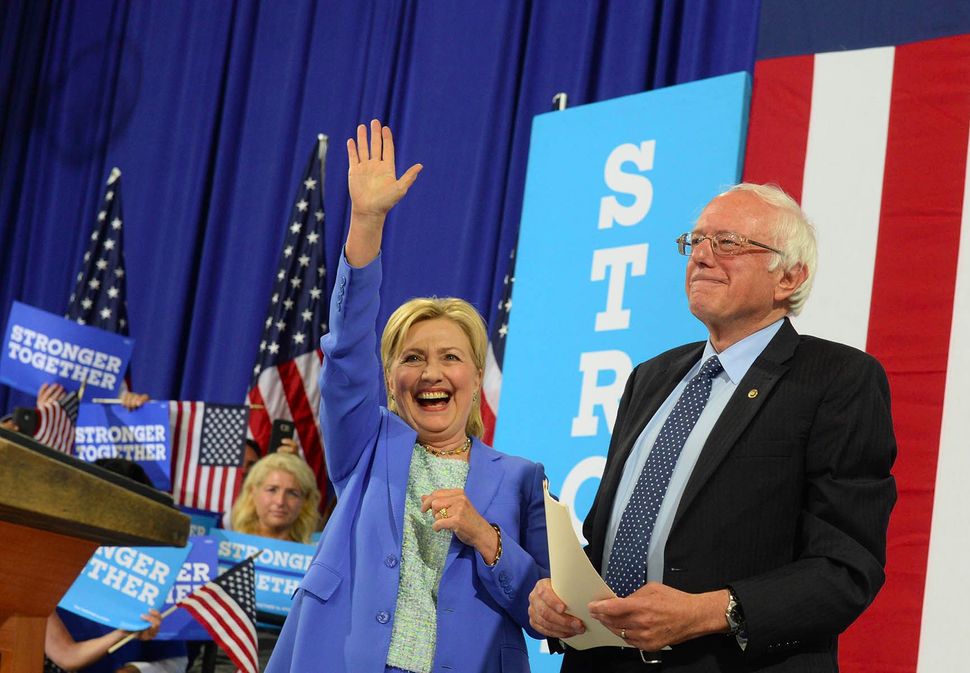 Democrat Bernie Sanders endorsed former rival Hillary Clinton for president in a show of party unity on Tuesday, saying she was the best candidate to fix the country’s problems and beat Republican Donald Trump in the Nov. 8 election.

With Clinton nodding in agreement beside him, Sanders put their bitter primary campaign behind them and said Clinton would take up the fight to ease economic inequality, make college more affordable and expand healthcare coverage for all Americans.

“This campaign is about the needs of the American people and addressing the very serious crises that we face, and there is no doubt in my mind that, as we head into November, Hillary Clinton is far and away the best candidate to do that,” he told a raucous crowd in Portsmouth, New Hampshire, that included plenty of vocal Sanders supporters.

“I intend to do everything I can to make certain she will be the next president of the United States,” the U.S. senator from Vermont said.

His endorsement, coming five weeks after Clinton became the presumptive Democratic presidential nominee, brought the most prominent holdout in the party’s liberal wing into Clinton’s camp. Sanders threw his support to Clinton less than two weeks before the Democratic National Convention in Philadelphia, where she is expected to be formally nominated.

“I can’t help but reflect on how much more enjoyable this election will be now that we are on the same side,” Clinton said of Sanders. “Thank you Bernie for your endorsement, but more than that, thank you for your lifetime of fighting injustice.”

In a statement, the Trump campaign said Sanders was now officially part of the rigged system he had criticized during the long primary battle with Clinton.

“Bernie’s endorsement becomes Exhibit A in our rigged system – the Democrat Party is disenfranchising its voters to benefit the select and privileged few,” said Stephen Miller, a senior policy adviser to Trump.

Clinton hopes the joint appearance will help her win over Sanders supporters, some of whom carried Sanders signs into the rally and frequently drowned out her backers. In recent Reuters/Ipsos polling, only about 40 percent of Sanders backers said they would back Clinton, and the crowd at Tuesday’s rally made it clear she still had work to do.

“I am absolutely certain I will not vote for Hillary Clinton,” said Gale Bailey, a Sanders supporter and an unemployed graphic designer from Rochester, New Hampshire, who attended the rally in a Sanders T-shirt.

“She’s a crook, and I’m not going to vote for a crook,” Bailey said, adding that she would write in Sanders’ name on the November ballot.

The appearance in Portsmouth concluded weeks of negotiations between the two camps as Sanders pressed for concessions from Clinton on his liberal policy agenda.

It came after Clinton last week adopted elements of Sanders’ plans for free in-state college tuition and expanded affordable healthcare coverage. Sanders also successfully pushed to include an array of liberal policy positions in the Democratic platform, which a committee approved on Saturday.

Sanders did not win all of his policy fights, most notably failing to win support for blocking a vote in Congress on the Trans-Pacific Partnership trade deal.

Top Democrats, including President Barack Obama and Senator Elizabeth Warren of Massachusetts, a favorite of the party’s liberal wing, have already announced their support for Clinton, leaving Sanders at risk of being left behind in the Democratic battle against Trump.

“I think all signs point to the fact that we’re going to have a very united party going into Philadelphia,” Clinton campaign spokesman Brian Fallon said on CNN earlier on Tuesday, “and when you compare it to the Republicans, we’re going to be miles ahead of them.”

Trump has struggled to unify the Republican Party after alienating many establishment figures with his stances on immigration, Muslims and women. A number of prominent Republicans are skipping the party’s convention in Cleveland next week.

In another sign of the Democrats’ growing unity, two prominent liberal groups that had backed Sanders, the Communications Workers of America labor union and the Congressional Progressive Caucus PAC, announced their support for Clinton on Monday.