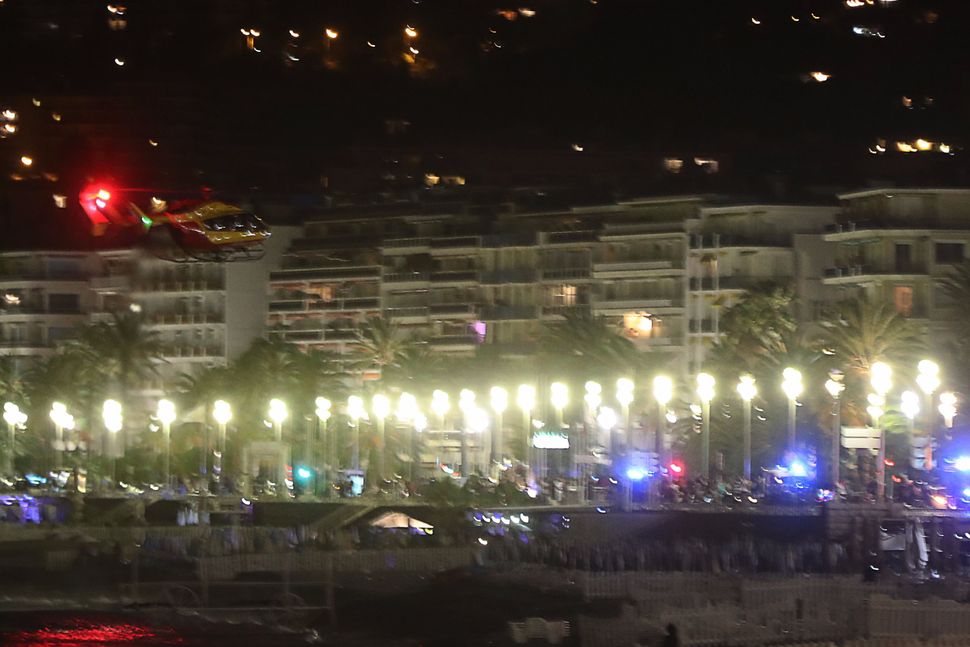 An attacker killed at least 75 people and injured scores when he drove a truck at high speed into a crowd watching Bastille Day fireworks in the French Riviera city of Nice late on Thursday, local media quoted officials as saying.

Police shot and killed the driver, who drove the heavy, long-distance truck at speed for well over 100 meters (yards) along the famed Promenade des Anglais seafront, hitting the mass of spectators late in the evening, regional official Sebastien Humbert told France Info radio.

The man had opened fire on the crowd, local government chief Christian Estrosi told BFM TV, and weapons and grenades were found inside the truck after he was killed.

“It’s a scene of horror,” local member of parliament Eric Ciotti told France Info, saying the truck had sped along the pavement fronting the Mediterranean, before being stopped by police after “mowing down several hundred people.”

Nice has an estimated Jewish population of 20,000.

Local broadcasters quoted officials as saying the preliminary death toll was 73. Other officials put the number of wounded as high as in the hundreds.

As the scale of the attack came into focus, Republican presidential candidate Donald Trump said he would postpone announcing his vice presidential pick, originally scheduled for Friday morning.

Humbert described it as a clear criminal attack, although the driver was not yet identified. Residents of the Mediterranean city close to the Italian border were advised to stay indoors. There was no sign of any other attack.

Almost exactly eight months ago Islamic State militants killed 130 people in Paris on Nov. 13, the bloodiest in a number of attacks in France and Belgium in the past two years. On Sunday, France had breathed a sigh of relief as the month-long Euro 2016 soccer tournament ended without a feared attack.

Police denied rumors on social media of a subsequent hostage-taking. Vehicle attacks have been used by isolated members of militant groups in recent years, notably in Israel, as well as in Europe, though never to such devastating effect.

One woman told France Info she and others had fled in terror: “The lorry came zig-zagging along the street. We ran into a hotel and hid in the toilets with lots of people.”

Another woman told the station she was sheltering in a restaurant on the promenade with some 200 other people, where things had calmed down about two hours after the incident.

Nice-Matin journalist Damien Allemand reported from the scene as events unfolded: “People are running. It’s panic. He rode up onto the Prom and piled into the crowd … There are people covered in blood. There must be many injured.”

The paper published a photograph of a damaged, long-distance delivery truck, which it said was riddled with bullets and images of emergency services treating the injured. Social media carried images of those hit lying apparently lifeless in pools of blood, prompting police to ask people to stop such posts.

Regional government chief Estrosi has warned in the past of the risk of Islamist attacks in the region, following Islamic State bloodshed in Paris and Brussels over the past 18 months.

The city, with a population of some 350,000 and a history as a flamboyant but also gritty metropolis in the sun, has seen some of its Muslim residents travel to Syria to fight, a path taken by previous Islamic State attackers in Europe.

French President Francois Hollande, who was in the south of France at the time of the attack but raced back to Paris to the national crisis center, had hours earlier said that a state of emergency put in place after the Paris attacks in November would not be extended when it expires on July 26.

“We can’t extend the state of emergency indefinitely, it would make no sense. That would mean we’re no longer a republic with the rule of law applied in all circumstances,” Hollande told journalists in a traditional Bastille Day interview.

His interior minister, Bernard Cazeneuve, was expected in Nice overnight, a source in the ministry said.—Reuters