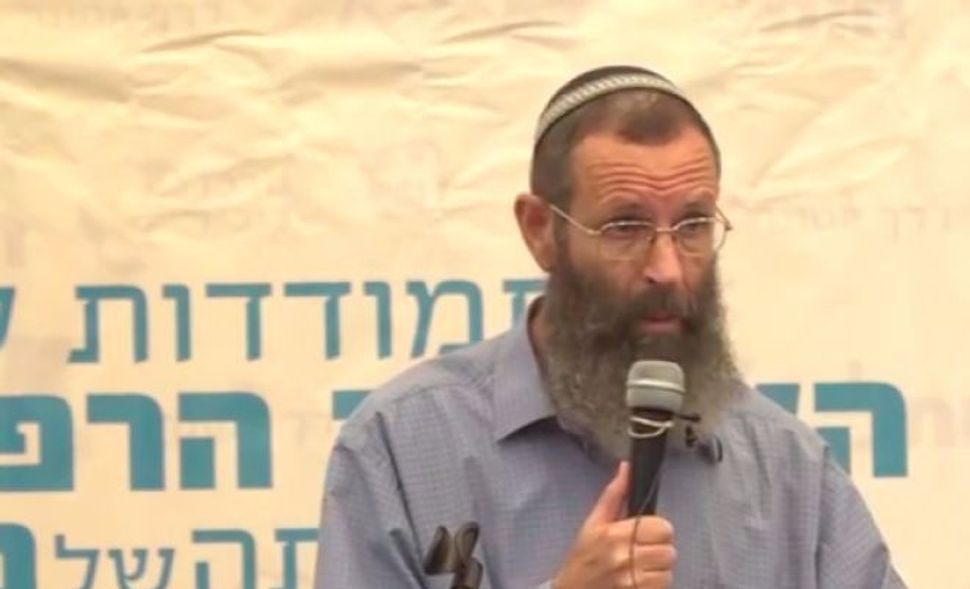 A rabbi who heads a religious Zionist pre-military yeshiva in the West Bank has come under criticism for calling homosexuals “perverts” and claiming the Israeli army is promoting a socially liberal agenda.

Rabbi Yigal Levinstein, who runs the Bnei David academy in the Eli settlement, also said last week at a conference — a video of the speech surfaced Sunday — that the Reform movement isn’t Jewish and in fact is an offshoot of Christianity.

The conference, called “Zion and Jerusalem,” reportedly gathered 700 rabbis and educators from the National Religious sector and was convened to deal with the perceived Reform movement influence on Israeli society.

A videotape of Levinstein’s speech appeared on the haredi Orthodox Hebrew-language website Kipa.

“There’s an insane movement here whose members have lost the normalcy of life,” he said. “This group makes the country mad and has now penetrated the IDF in full force – and no one dares open their mouth and speak out against it.

“At Bahad 1, there are lectures by perverts,” he said, referring to the main training base for Israeli army officers, with perverts meaning homosexuals.

Levinstein also said: “Under the framework of pluralism, soldiers and officers are taught to refer to [LGBT people] as ‘proud,’ but I don’t dare call them that … ‘perverts’ is what I call them.”

Israeli President Reuven Rivlin criticized Levinstein during a meeting with the parents of Shira Banki, the 16-year-old who was stabbed to death during last year’s Jerusalem gay pride parade.

“The things said by rabbis, leaders and intellectuals pain me greatly,” Rivlin said. “I would like to once again remind everyone that ‘man is beloved because he was created in God’s image’ – all of mankind, without distinctions of religion, race or gender.”

“Jewish law is not meant to be a divisive tool, nor is it meant to be a tool for marking out people, identities or sectors,” Bennett said Monday afternoon. “One cannot denigrate an entire community and take shelter behind Jewish law.”

“The things that have been said are not acceptable to me and are not the path of religious Zionism. Reality is more complicated than what is religiously permitted and prohibited,” he said.