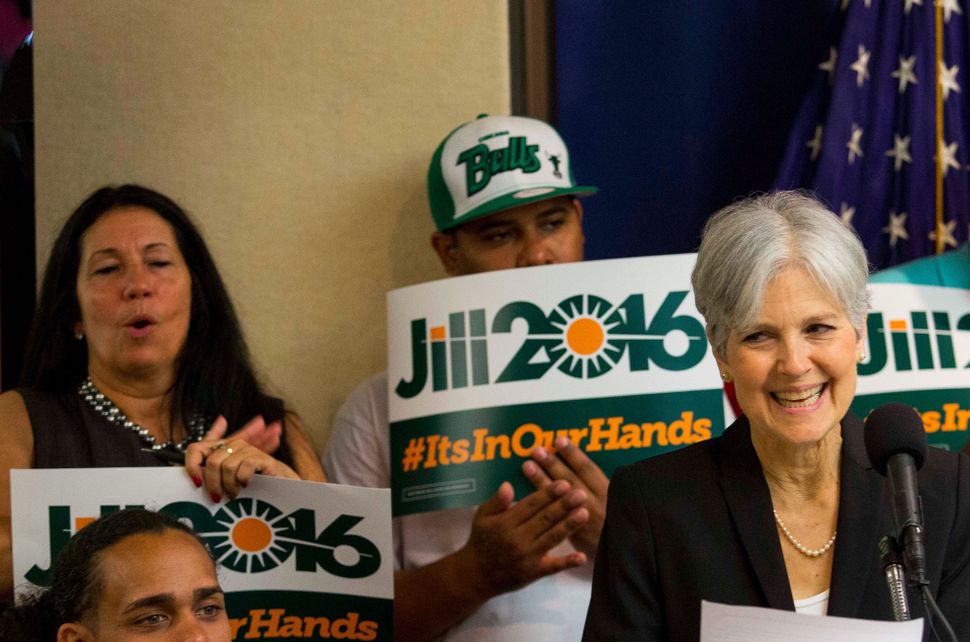 (JTA) — Voters who have their hearts set on supporting a left-wing Jew running an insurgent campaign still have a candidate.

Jill Stein, the 2012 Green Party candidate, is making another run. And this year, with Hillary Clinton and Donald Trump both earning historically low popularity ratings, she hopes she can attract at least some of Bernie Sanders’ 13 million Democratic primary voters. With a far-left platform, Stein advocates government-guaranteed full employment, a national mobilization on the order of World War II to fight climate change and an initiative to cut military spending by at least 50 percent.

Stein isn’t gaining much traction now. According to RealClearPolitics’ average, she’s polling at 3.1 percent nationally, about half of where Libertarian nominee Gary Johnson is at, and far behind Clinton and Trump. But she’s hoping to capitalize on Sanders’ endorsement of Clinton, drawing voters unwilling to support Hillary’s campaign.

“If you don’t want to vote for a war monger or racist billionaire, there are more options,” she tweeted Tuesday. “The political revolution will keep going.”

Here are six things you need to know about the one Jewish candidate left in the race.

She grew up in a Reform synagogue in a Chicago suburb.

Stein was born in Chicago in 1950 and grew up in the northern suburb of Highland Park. Her family was Reform, and she attended North Shore Congregation Israel in the nearby town of Glencoe. She attended Sunday school there for 10 years, according to a 2012 interview with Forbes, and was confirmed rather than bat-mitzvahed.

She said Reform Judaism’s emphasis on social justice had a “huge” influence on her policies. Growing up, Stein said, she “really had the values of the Old Testament, the golden rule, really very much drummed into my upbringing.”

“My parents were of the Holocaust generation,” she told Forbes. “I heard from my mother in particular about the importance of taking social responsibility, the importance of speaking up when you see things going on in your community that aren’t right.”

Now Stein is in what she described as a “mixed” family. She said her “relationship with organized Judaism” ended when her mother died in 2010.

“We’re a little bit ecumenical,” Stein said of her family. “I have a lot of respect for many religions and spiritual traditions. I feel I am very much culturally Jewish, I was raised Jewish, though I am not actively a practicing Jew.”

She wants to end foreign aid to Israel and supports BDS.

One of the biggest differences Stein notes between herself and Sanders involves their respective positions on Israel. Sanders described himself as “100 percent pro-Israel” while advocating Palestinian rights, but Stein has had some harsh words for the Jewish state. Her campaign calls for ending all aid to Israel, and she has accused it of committing war crimes.

Like the Green Party as a whole, Stein supports the movement to boycott, divest from and sanction Israel, or BDS. She places Israel in the company of non-democratic American allies Saudi Arabia and Egypt. In tweets, she has accused Israel of “the pillage of Palestine” and written that Israel’s “war crimes & human rights violations are off the charts.”

“With regard to Israel, the United States has encouraged the worst tendencies of the Israeli government as it pursues policies of occupation, apartheid, assassination, illegal settlements, demolitions, blockades, building of nuclear bombs, indefinite detention, collective punishment, and defiance of international law,” a position paper on her foreign policy reads.

She has asked Bernie Sanders to take her place.

In a 2015 interview with Democracy Now announcing her candidacy, Stein said there were “many similarities” between her and Sanders’ candidacy. Now that he’s lost the Democratic nomination, Stein has a Plan B for him: Take over the Green Party ticket.

“I’ve invited Bernie to sit down and explore collaboration – everything is on the table,” she told The Guardian on July 8. “If he saw that you can’t have a revolutionary campaign in a counterrevolutionary party, he’d be welcomed to the Green Party. He could lead the ticket and build a political movement.”

She’s a doctor who has held local office in Massachusetts — and was in a band.

Before entering politics, Stein was a practicing physician for 25 years. A graduate of Harvard Medical School, Stein transitioned into activism in the mid-1990s. She has fought for cleaner energy, campaign finance reform and more environmental protections in Massachusetts, where she lives with her husband, Richard Rohrer, also a doctor. In 2003 she founded the Massachusetts Coalition for Healthy Communities, a public health and environmental protection nonprofit.

Stein ran as a Green candidate for Massachusetts governor in 2002 against Mitt Romney, who won the election. She has also run for state representative and Massachusetts secretary of state. She was elected to two terms on the Lexington Town Meeting, her local government body.

While Stein wasn’t fighting for the environment in Massachusetts, she was making music. In the 1990s and 2000s, she was half of Somebody’s Sister, a folk-rock band that produced four albums. Her partner, guitarist Kenny Selcer, is still active.

Her top campaign promise is a “Green New Deal.”

Stein’s platform covers a range of issues, from criminal justice reform to education and foreign policy. But her top pledge is a “Green New Deal,” which would “create 20 million jobs by transitioning to 100% clean renewable energy by 2030.” She wants to end all subsidies for fossil fuel companies and phase out fossil fuel and nuclear plants.

Stein also wants to create a universal basic income that all citizens would receive from the government, and to guarantee paid work to every American with a $15 per hour minimum wage. Like Sanders, she opposes free trade agreements. She also supports a “Medicare for all” plan that would enact single-payer universal health care. And like Sanders, she calls for universal free college education.

In 2012, she won a record number of votes for a female candidate — and got arrested.

One of Stein’s most notable moments of the last campaign was when she and running mate Cheri Honkala were arrested for disorderly conduct while trying to enter the second presidential debate at Hofstra University in October 2012. Stein is hoping that this time around, her poll numbers will shoot up to 15 percent, allowing her to participate in the debates.