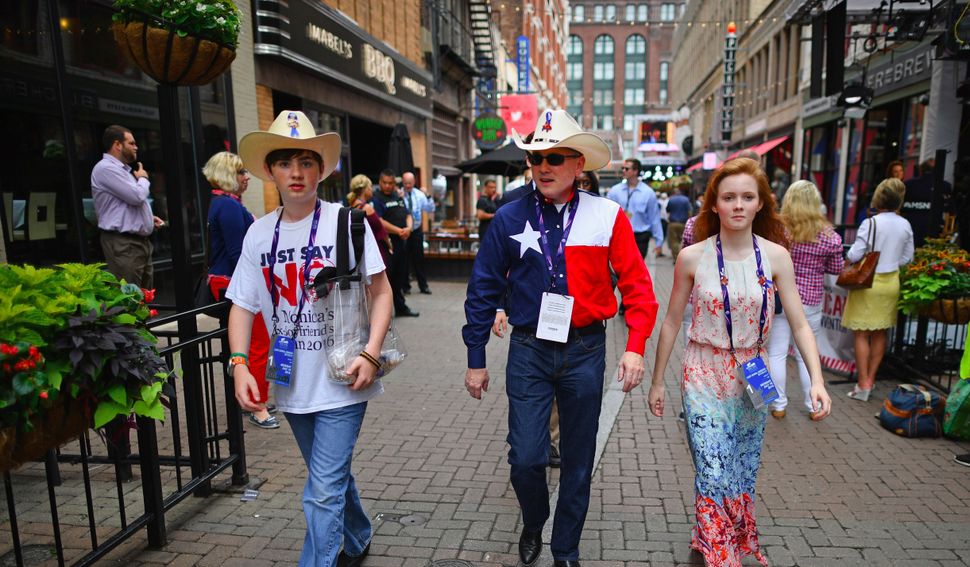 CLEVELAND (JTA) – Trumpism is visible here on the shores of Lake Erie, but not in the way nominees and what they stand for have dominated previous conventions. A few baseball caps are visible with his slogan, “Make America Great Again,” and there are discreet buttons and a service dog named Titan wearing a Trump sticker.

Law enforcement, in the wake of a horrific spate of police shootings, has become a theme, with delegates whooping cheers for blue uniforms whenever they appear. There is one subtle nod to Trumpism: a proliferation of tall young blonds who have affected the swept-over hairstyle of his daughter Ivanka.

More interesting to the delegates are the attractions at the Rock and Roll Hall of Fame. Among the more popular exhibits is a blow-up photo of Doors frontman Jim Morrison, who died in Paris in 1971, having gained notoriety for his sexually explicit lyrics and stage performances. Baby boomer couples in pastel-colored shorts and shirts affect contemplative expressions as they pose in front of the photo.

Downstairs, a group of aging rockers, The Second Amendments, blast out the Sam and Dave hit “Hold On, I’m Coming.” Upstairs, a 30-something Washington-based GOP operative garbed in a dark suit and a crew cut examines the Beastie Boys exhibit, where they’re billed as “smart, arty Jewish kids from New York.” He can’t help himself and starts rocking. A woman watching him shouts in laughter, and he says, “Hey, I’m young enough to be a fan.”

The morning after the opening night party, the Ohio delegation has a breakfast emceed by Ohio’s Jewish Republican star, Josh Mandel, the glamorous young state treasurer.

An hour into the event, there are plenty of hangover jokes but not a single Trump mention — neither by Mandel nor the speaker, Sen. Tom Cotton, R-Ark., a rising star in the party and a neoconservative favorite for his robust embrace of foreign interventionism.

“While we definitely want to elect a Republican the next president of the United States, what I’m focused on and what I’ll be focusing on is helping Rob Portman,” said Mandel, referring to the senator facing a tough challenge from former Ohio Gov. Ted Strickland.

Trump is a different kind of Republican. The official convention guide does not feature the typical outdoorsy photo of the candidate enjoying his family. Instead there is Trump indoors, candle-lit, grasping his wife, Melania, in a décolletage-revealing dress. She stares at him worshipfully, displaying a massive diamond ring. He’s raised millions for veterans, his bio says, and in 1996 he was honored with a lunch at the Pentagon.

David chimes in: “The alternative is a crook who should be in jail.”