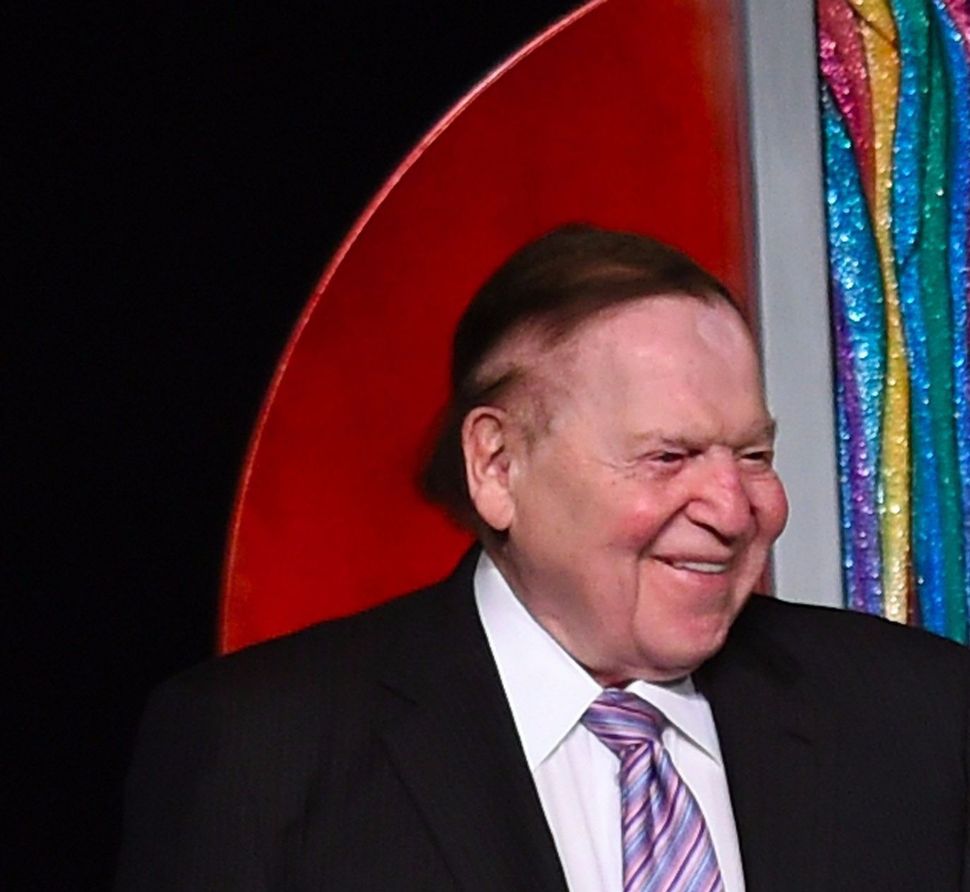 (JTA) — Sheldon and Miriam Adelson are doing a little damage control at the Republican convention.

After being stung by the gripping tale of a dramatic, sudden repudiation of Texas Sen. Ted Cruz, the major pro-Israel philanthropist and Republican donors sought to douse the flames a bit Thursday.

There is no rift, they asserted, only a cooling off until after Nov. 8, Election Day. Until then, the Adelsons are invested in Donald Trump, while Cruz remains a darling of the pro-Israel right.

Reports Wednesday night said Cruz had been banned from Adelson’s suite at the Quicken Loans Arena here after Cruz declined to endorse Trump during his convention speech Wednesday night, and exited the stage to boos from the delegates.

Describing what occurred as a snub or a ban would be to “utterly misrepresent” it, claimed Rabbi Shmuley Boteach, who was present and who said he issued a statement at the Adelsons’ behest.

“After the speech, given its newsworthy content, it appears that a large contingent of reporters followed the Senator as he made his rounds, including to the Adelsons’ suite,” said Boteach. “The decision was taken by advisers to the Adelsons not to make a spectacle in the small private suite given the intense media scrutiny engulfing the Senator at that moment and to instead meet him in private the following day.”

Boteach, whose advocacy group The World Values Network is funded in large part by the Adelsons, said the couple planned to meet privately with Cruz on Thursday. It was not immediately clear whether that purported meeting ever took place.

“Whatever issues they would have had with Senator Cruz’s speech, they would never have chosen to disrespect a friend who is a United States Senator, a patriot, and a staunch friend of Israel,” he said.

Cruz still stands out as perhaps the best political friend to the wing of pro-Israel activists who embrace settlements and would like to put the two-state solution into deep freeze, according to Morton Klein, the president of the Zionist Organization of America.

“There is no one better than Cruz,” Klein, whose group is also a major beneficiary of Adelson’s largesse but who emphasized that he was not speaking on behalf of the casino magnate. “I mean, others are just as good,” he said, naming former U.S. House of Representatives Speaker Newt Gingrich and former Arkansas Gov. Mike Huckabee among once and possibly future presidential contenders. “But there is no one better.”

The Adelsons kept out of this presidential race for months, in part because their generous backing for Gingrich in the 2012 cycle is believed to have set back eventual nominee Mitt Romney’s bid to unseat President Barack Obama (who, like this year’s Democratic nominee, Hillary Clinton, they consider a greater threat than Trump).

Still, Adelson did reveal last year that he favored Florida Sen. Marco Rubio, while his wife Miriam was impressed with Cruz. Both men had what the pro-Israel right regards as unassailable records on Israel and on opposing the Iran nuclear deal.

Adelson did not pronounce his preference for Trump until May, after Rubio’s campaign imploded – he lost his home state, Florida, to Trump — and after Trump had emerged as the presumptive nominee, despite a formidable late-in-the-game challenge by Cruz. Adelson reportedly told Trump that he would back his campaign to the tune of tens of millions of dollars.

There was not much love lost between the two. When Trump, last year, was boasting that he did not need Adelson’s money, sources in Adelson’s camp were quoted as saying that he had assiduously courted the casino magnate. Trump’s refusal to say he would completely kill the Iran deal – he says he hates it, but appears open to tweaking it as opposed to scrapping it outright – and his back and forth on whether he would be “neutral” on Israel were also of concern to Adelson and other Republicans.

So when it emerged late Wednesday that Adelson ordered Cruz turned away from his suite, there was speculation of a rift. Those reports appeared to be confirmed when Adelson’s adviser, Andy Abboud, posted a photo on Twitter of Trump posing with the Adelsons, captioned, “The Adelsons and their choice for president!”

However, a source close to the Adelsons immediately told CNN that they shut Cruz out because they did not want him to use the couple “as a prop against Trump” – suggesting that the distancing was about electoral strategies (which will be irrelevant post-Nov. 8) and not about a permanent falling out.

Cruz was a headliner at the annual ZOA dinner in 2014. The 2016 headliner is Rep. Ed Royce, R-Calif., the chairman of the House Foreign Affairs Committee, but Cruz would get a hero’s welcome were he to turn up, Klein said. (The dinner takes place in December, after the election turns primaries tensions into mist.)

“Jews who are staunch supporters of Cruz, almost entirely because of his pro-Israel stance, I believe this will have little impact,” he said. “Because support for Cruz is all about his strong positions on Israel.”