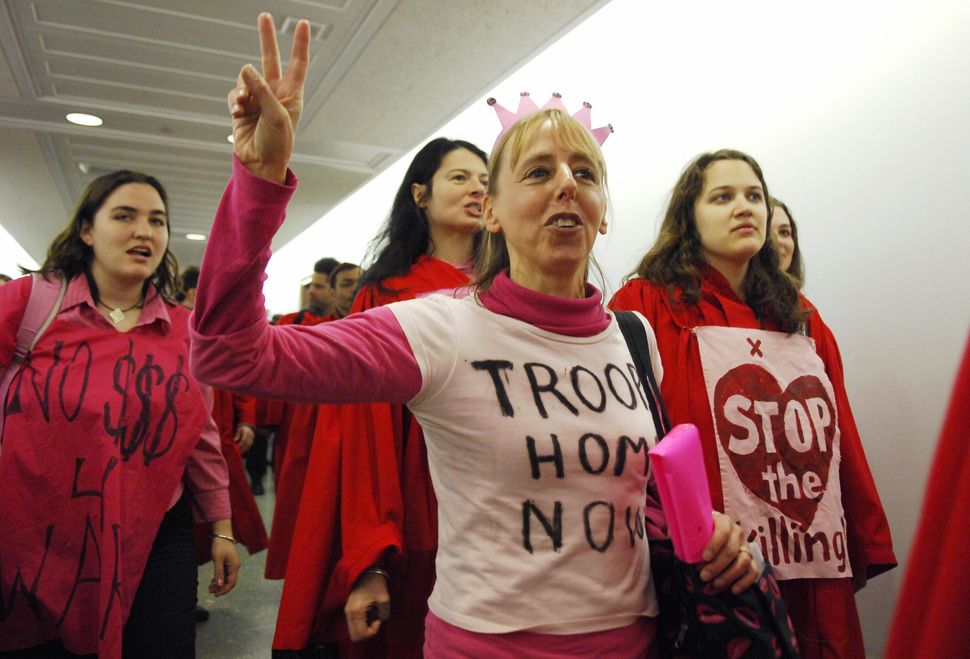 A prominent peace activist interrupted Donald Trump’s speech on Thursday at the Republican National Convention in protest of his immigration policy.

Medea Benjamin, the Jewish founder of the anti-war group Code Pink, shouted and held up a sign that read “Build bridges, not walls,” as Trump watched on silently.

After police handcuffed Benjamin, Trump praised their actions, drawing cheers from the audience.

“How great are our police, and how great is Cleveland?” the Republican nominee said.

“Scapegoating immigrants and refugees – some of the most marginalized and powerless members of our society – for the problems we face as a nation is deeply racist,” Benjamin said in the press release.

“I rose to disrupt Trump’s ‘victory speech’ tonight to make sure that no one, whether in the arena or watching in their living room, could overlook the horrifying racism, xenophobia, Islamophobia and misogyny that is at the root of Donald Trump’s ideology,” she explained.

Benjamin has been repeatedly arrested for her public protests against a variety of war-related causes, including the Iraq war, drone warfare and Israel’s military actions in Gaza.

In March 2015, Benjamin protested Israeli Prime Minister Benjamin Netanyahu’s speech before Congress, in which he warned against making a nuclear deal with Iran.

“We’re just appalled that Netanyahu is coming to sabotage very critical, important and positive nuclear talks that are happening,” Benjamin said, according to Roll Call.

Video: A protester holding a sign that says “build bridges, not walls” is confronted during Trump’s speech. https://t.co/qOi3sMgk50