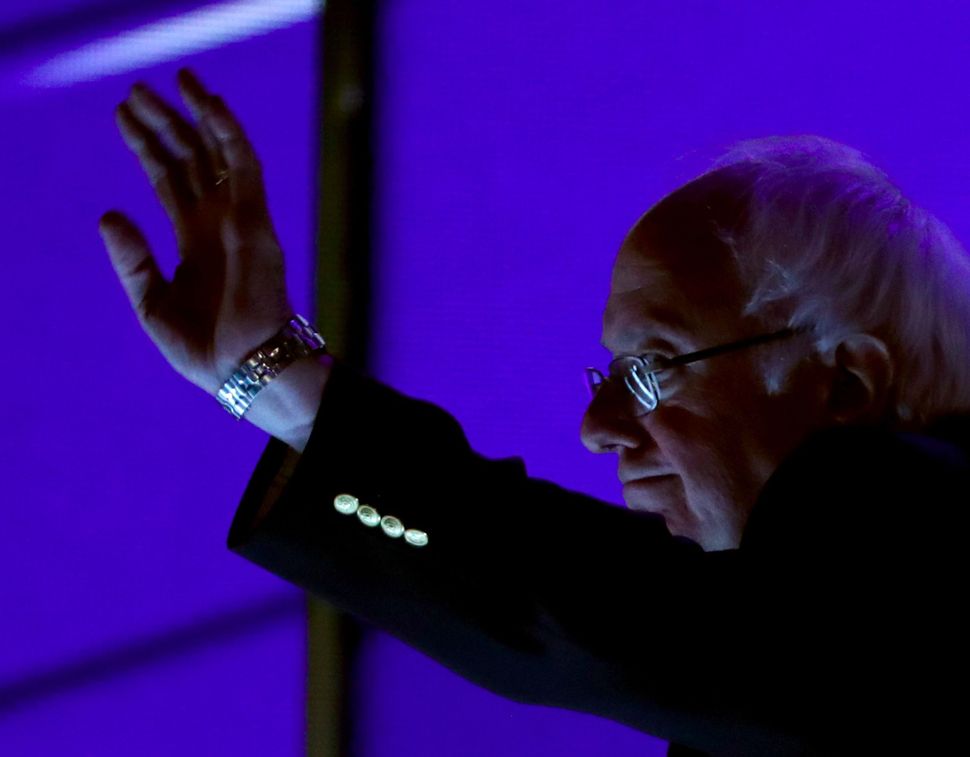 Bernie Sanders on Monday urged his supporters to back Democratic rival Hillary Clinton in her White House bid, drawing jeers and shouts of “We want Bernie” in a show of discord as the party kicked off its national convention.

The boos underscored the deeply felt anger his convention delegates feel at both Clinton’s win and embarrassing emails leaked on Friday suggesting the party leadership had worked to sabotage Sanders’ campaign for the nomination.

Debbie Wasserman Schultz resigned as party chairwoman on Sunday, a day before the start of the Philadelphia convention to formally nominate Clinton for the Nov. 8 election, and on Monday she bowed to pressure and agreed not to open the convention.

Speaking to his supporters, Sanders savaged Republican presidential candidate Donald Trump, calling him a danger to the future of the country who “must be defeated,” but some in the room booed when he said “we have got to elect Hillary Clinton” and her vice presidential running mate, U.S. Senator Tim Kaine of Virginia.

Sanders, a U.S. senator from Vermont, tried to calm them down. “Brothers and sisters, this is the real world that we live in,” he said, adding, “Trump is a bully and a demagogue.”

Members of the crowd started screaming back: “So is Hillary.”

“She stole the election!” someone else shouted.

The leak on Friday of more than 19,000 Democratic National Committee emails by the WikiLeaks website put the spotlight back on Sanders’ failed bid to win the Democratic nomination, and in particular on his complaints during the campaign that the party establishment was working to undermine him.

A democratic socialist, Sanders ran an unexpectedly tough race against former Secretary of State Clinton, galvanizing young and liberal voters with his calls to rein in Wall Street and eradicate income inequality.

On Monday, Sanders brought the loudest cheers when he noted that Wasserman Schultz, a U.S. senator from Florida, had resigned as the Democratic National Committee chairman over the email controversy.

“Her resignation opens up the possibility of new leadership at the top of the Democratic Party,” Sanders said, adding that the leadership should be made up of “people who want real change.”

Wasserman Schultz’s resignation is effective at the end of the convention, but on Monday, she told Florida’s Sun Sentinel newspaper that she would not speak as planned at the opening of the convention on Monday afternoon.

“I have decided that in the interest of making sure that we can start the Democratic convention on a high note that I am not going to gavel in the convention,” Wasserman Schultz said. The meeting “needs to be all about making sure that everyone knows that Hillary Clinton would make the best president,” she said.

The controversy over the emails has been an embarrassing prelude to the convention, which Democratic officials had hoped would convey no-drama competence in contrast to the volatile campaign of Trump. The New York businessman was formally nominated for president at a chaotic Republican convention in Cleveland last week.

On Monday morning Wasserman Schultz struggled to be heard above boos as she spoke to the Democratic delegation from her home state. Some protesters held up signs that read “Bernie” and “E-MAILS” and shouted “Shame,” as she spoke.

The cache of leaked emails disclosed that DNC officials explored ways to undercut Sanders’ insurgent presidential campaign, including raising questions about whether Sanders, who is Jewish, was an atheist.

Sanders supporters were already dismayed last week when Clinton passed over liberal favorites like U.S. Senator Elizabeth Warren of Massachusetts to select the more moderate Kaine as her running mate.

“They throw ‘party unity’ around as if we’re supposed to jump for joy when they mention her name,” said Manuel Zapata, a Sanders delegate from California, referring to Clinton. “What we’ve been saying for months is obviously true: they had the finger on the scale of the campaign,” he said.

The Clinton camp questioned whether Russians may have had a hand in the hack attack on the party’s emails in an effort to help Trump, who has exchanged words of praise with Russian President Vladimir Putin.

The FBI said on Monday it would investigate the nature and scope of the hack.

“Wow, the Republican Convention went so smoothly compared to the Dems total mess,” he wrote on Twitter.

The Republican gathering was overshadowed by accusations of plagiarism in a convention speech by Trump’s wife, Melania, and by former presidential candidate Senator Ted Cruz’s angry refusal to endorse Trump.

In a post-convention “bump,” Trump pulled ahead in at least one opinion poll, after lagging Clinton in most national polls for months.

A CNN/ORC opinion poll on Monday gave Trump a three-point lead over Clinton, 48 percent to her 45 percent in a two-way presidential matchup. The survey was conducted July 22-24 and had a margin of error of 3.5 percentage points.

Clinton, 68, a former first lady and U.S. senator, will be the first woman nominated for president by a major U.S. political party. She waged a months-long battle to defeat the unexpectedly tough challenge from Sanders, 74.

Sanders was among those due to speak on the first evening of the convention. Others included President Barack Obama’s wife, Michelle Obama.—Reuters