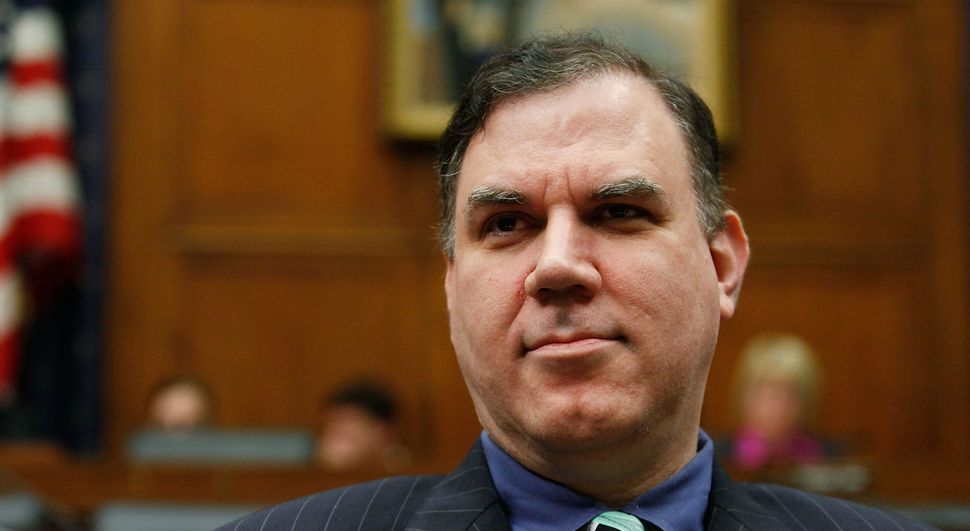 Jewish Florida Rep. Alan Grayson threatened a Politico reporter with arrest for assault Tuesday after he yelled at the reporter for “hassl[ing]” him with questions about his ex-wife’s allegations of domestic abuse.

Politico published a video of reporter Edward-Isaac Dovere approaching the Senate candidate after a Politico event in Philadelphia. It shows Grayson pushing past Dovere as the reporter tries to ask about the candidate’s reluctance to address domestic abuse allegations.

As Grayson made his way from the event to the elevator banks, the video shows him becoming annoyed with Dovere, who continued to follow and question him.

“You’re getting in my way, my friend. You’re assaulting a member of Congress. You’re pushing me. Have this guy escorted out, please,” Grayson told what appeared to be security.

Grayson and Dovere argued over who had pushed whom. After Dovere mentioned that Politico videographers had filmed their encounter, Grayson told the reporter he would use the video in a report filed with the Capitol police.

“So you’re going to accuse a reporter of assaulting you for asking a question?” Dovere asked.

Grayson pushed back, claiming he was filing a report because Dovere got in his face.

“I’m hoping that somebody comes here and arrests you, we’ll see if that happens or not,” Grayson said before entering the elevator.

The revelation that Grayson’s ex-wife Lolita Grayson has filed police reports over the past two decades alleging domestic abuse broke earlier Tuesday after she gave her first public comments on the allegations.

In an email to Politico, Lolita Grayson said she was sharing her story in order to reveal his true character.

She provided police reports documenting at least four incidents of alleged domestic abuse, both in Virginia and Florida, including one incident in which she claimed he had threatened to kill her.

Alan Grayson strongly denied his ex-wife’s accusations, and added that he was the victim of battering by her in 2014. The Graysons’ marriage ended bitterly last year in an annulment that Lolita Grayson is now appealing.

Grayson’s current wife, Dena Grayson, is running for his seat in the House as he runs for the Senate.

But, in light of his ex-wife’s allegations, the liberal groups Progressive Change Campaign Committee and Democracy for America issued a joint statement withdrawing their endorsement of Grayson for Senate.

During divorce proceedings, Grayson claimed his ex-wife had struck him several times and set one of their cars on fire. A judge annulled the marriage after it was discovered that Lolita Grayson had not divorced her previous husband.

In a statement by his lawyer, Mark NeJame, Grayson called the allegations against him false and suggested that there has never been any evidence to support his ex-wife’s claims.

“Lolita is a disturbed woman. She has made on false allegation after another. Her own daughter refutes her,” NeJame told Politico. “There never has been a witness or any proof whatsoever of her claims. The claims have been so ridiculous that not one time has there even been enough probable cause to bring a charge or an arrest against Alan Grayson.”

According to the police reports provided by Lolita Grayson, Alan Grayson had told police that he believed his then-wife to be fabricating stories in order to damage his political career. However, three of the incidents occurred before Grayson took political office in 2008.

But, in the most recent incident that allegedly occurred in 2014, Lolita Grayson claimed her husband shoved her, leading her to retaliate. While the police report documented bruising on her back, statements by one of Grayson’s staffers and the couple’s eldest daughter contradict Lolita Grayson’s account.

The daughter, Skye Grayson, herself was accused of domestic battery by her mother in 2013, but no arrests were made.

Alan Grayson claimed in the 2014 incident that he was actually the victim, but the assistant state’s attorney that decided against prosecuting Lolita Grayson for battery called his claims “not credible,” according to Politico.

Despite filing several police reports over the past two decades, Lolita Grayson has declined offers by police to either remove her from her home or press charges against her husband.