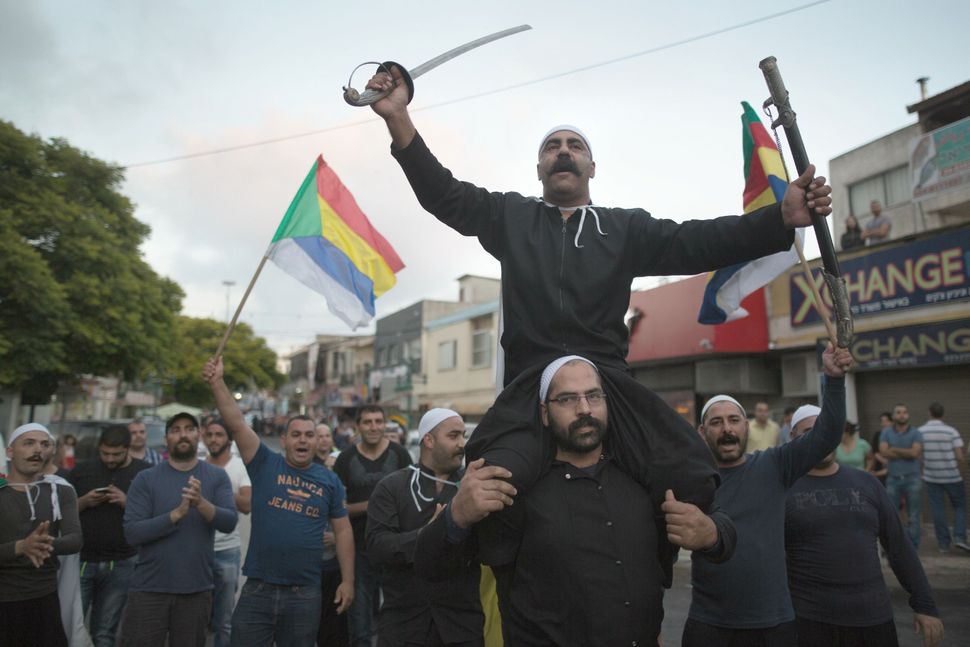 — A leader of the Druze population of the Golan Heights disputed the assertion of a United Nations committee that accused Israel of imposing economic and social hardships on his community.

Dulan abu-Saleh, the mayor of Majdal Shams, the largest Druze town in the Golan, told Makor Rishon that the U.N. Economic and Social Council’s recent statement on the area was “a total joke,” the daily reported Friday.

Unlike other Druze populations in Israel serve in the Israel Defense Forces, the Golan’s Druze population of some 20,000 has been careful not to align itself publicly with the Jewish state, which annexed the Golan in 1981 after capturing it from Syria during the Six-Day War of 1967.

The eruption in 2011 of a civil war in Syria changed that, causing a sharp increase in the number of Golan Druze who applied for Israeli citizenship, which has been available to them since 1981.

Abu-Saleh objected to the inclusion of his native area in the UN panel’s statement earlier this month, which said that “economic and social repercussions of the occupation on the living conditions of the Palestinian people in the occupied Palestinian territories, including East Jerusalem and the Arab population in the occupied Syrian Golan.”

“I don’t understand what they’re talking about, it’s laughable,” abu-Saleh said. Druze in the Golan “don’t serve in the IDF and so far are only receiving from the state.” Referencing the war in Syria, he said: “Why don’t they condemn the horrors in Syria, where dozens of children are killed daily? Golan residents have a good life.”

He also said: “Although we weren’t included in some major cabinet decisions on budgets, when we build and make up plans we never felt discrimination. On the contrary, we always found an attentive ear.”

Prior to the eruption in 2011 of a civil war in Syria, only 1,700 of the Golan’s Druze claimed Israeli citizenship offered to them. Hundreds have applied since then.

Very rarely engaging in hostilities, their communities have opened hundreds of restaurants and bed-and-breakfasts serving Israelis and tourists who visit the Golan’s many nature reserves. But the Druze community leaders always insisted they were Syrian citizens seeking to return to Syria from Israeli occupation.

Karim Batkhish, a resident of the town of Masa’ada, is quoted as saying: “The war in Syria is irrelevant to us. Some may say they support [Syrian President Bashar] Assad but it’s a lie to show Syria we’re with them. They’re lying, no one wants to see Syria here.”

Separately, the international nonprofit Human Rights Watch, which like the UN has faced accusations of displaying a bias against Israel, was criticized Thursday for saying in a report on child detention that Israeli “military courts do not provide for specialized juvenile justice.”

This statement is “completely false,” the watchdog group NGO Monitor said Thursday. “A special Juvenile Military Court was established in 2009, and according to the Israeli Ministry of Justice only ‘judges that have received relevant professional training, similar to the training offered to justices of the Youth Courts in Israel, are qualified to serve as juvenile judges.’“

The accusation appears in a report published by HJRW Thursday entitled “Extreme Measures: Abuses against Children Detained as National Security Threats.” It also cites a 2013 UN Committee on the Rights of the Child document which claims that, “Israel had ‘fully disregarded’ previous recommendations to comply with international law.”

But this allegation is also false, according to NGO Monitor. In February 2015, UNICEF published a report on its ongoing dialogue with the Israeli government, citing “positive developments in the administration of juvenile military justice.”

The report “clearly reflects the primacy of HRW’s political agenda over methodological rigor and due diligence,” NGO Monitor wrote.