Leaving the Death Camp Pope Says Auschwitz ‘Did Not End’ 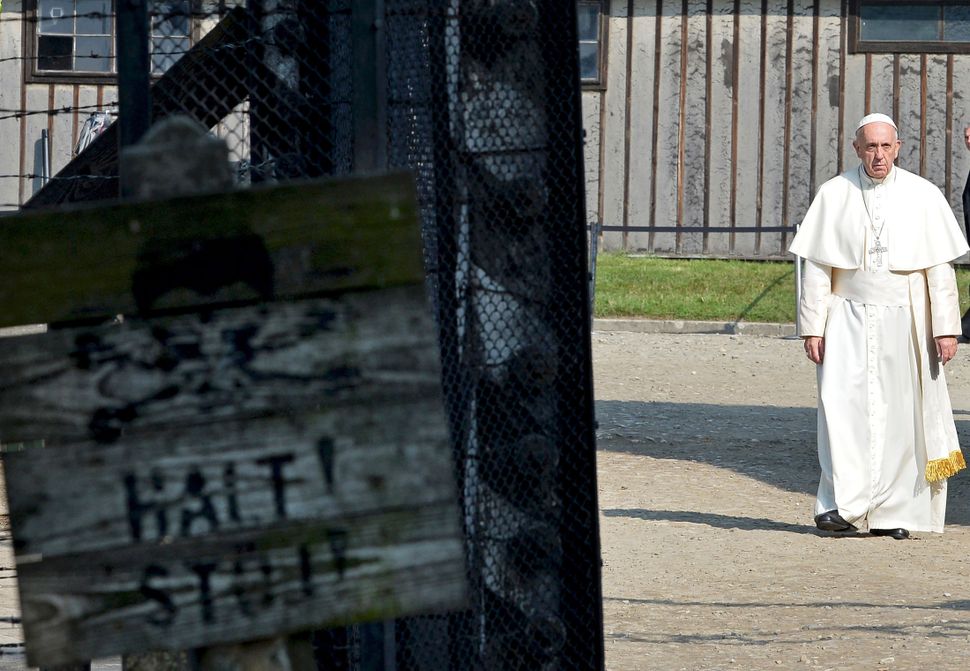 In Krakow, following his historic visit to the Nazi death camp in Poland Friday, the pope compared contemporary atrocities around the world to the atrocities in Auschwitz, The Associated Press reported.

Citing torture and overcrowded prisons, the pope said, “We say, yes, there we saw the cruelty of 70 years ago, how people died being shot or hanged or with gas. Today in many parts of the world where there is war, the same thing is happening.”

In the past, Jewish leaders have sometimes bristled at comparisons between the Holocaust and other atrocities, particularly ones that have not involved genocide.

While at Auschwitz, Francis did not make any public statements, but engaged in silent prayer. He wrote in a guest book there, “Lord, have mercy on your people! Lord, forgiveness for so much cruelty!”

While at Auschwitz, the pope also met with 11 Auschwitz survivors and a group of Polish Catholics who rescued Jews during the Holocaust, in a meeting arranged by Poland’s chief rabbi, the American-born Michael Schudrich.

In a telephone interview with The Associated Press on Friday, Schudrich said the pope’s meeting with survivors was “something I have been thinking about for a while: what kind of non-material present, what kind of thank-you, can we give to the ‘Righteous’?”

While the Jewish Foundation for the Righteous offers them some financial help to non-Jews who risked their lives to save Jews, Schudrich told the AP he “wanted to come up with a spiritual gift and I thought that a special blessing from the pope would make them feel honored because of their unbelievable morality and humanity.”

In a statement Friday issued in advance of Pope Francis’ visit to Auschwitz, World Jewish Congress president Ronald Lauder praised the pontiff, who has forged ever-closer ties between the Catholic Church and Jews since his election in 2013.

“Pope Francis is one of the closest allies Jews have today in the fight against anti-Semitism, bigotry and hatred,” Lauder said. “He is a true friend of the Jewish people, a man who reaches out to others and embraces them. Never over the past 2,000 years have Catholic-Jewish relations been better.”

The pope’s visit “sends an important signal to the world that this dark chapter must never be forgotten and that the truth about what happened seven decades ago must not be obfuscated,” Lauder added.

The late pontiff John Paul II, who was born in Poland, visited Auschwitz in 1979. His successor, Pope Benedict XVI, visited in 2006.

“Pope John Paul II came here as a son of the Polish people,” Benedictus said. “I come here today as a son of the German people.  For this very reason, I can and must echo his words: I could not fail to come here.”

Leaving the Death Camp Pope Says Auschwitz ‘Did Not End’