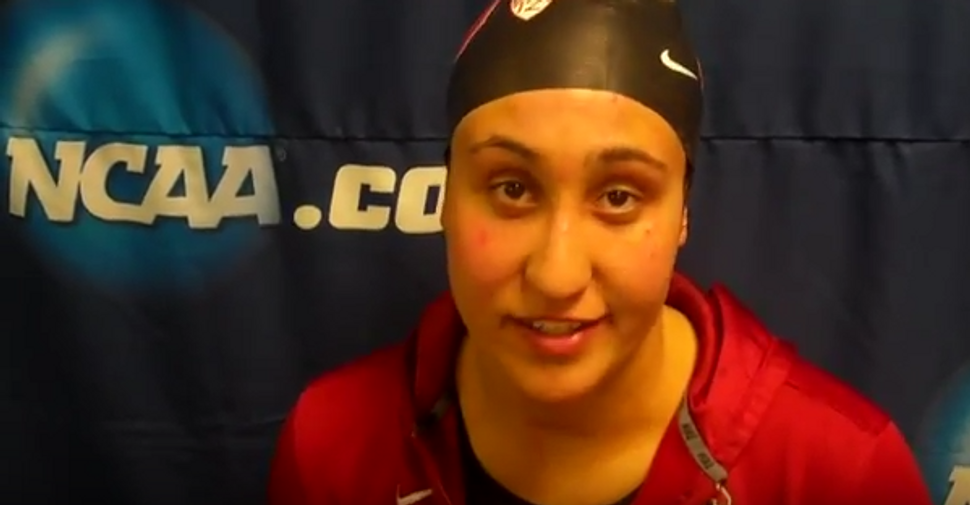 NETANYA, Israel (JTA) – Andrea Murez steps on the diving board, adjusts her goggles, swings her long arms and propels herself into the water at the Wingate Institute athletic complex here.

Murez is training with a dozen other swimmers. She is the one preparing for the Summer Olympics a few weeks later.

The 24-year-old Los Angeles native will be representing Israel when she hits the pool on Aug. 8 at Rio de Janeiro’s Olympic Aquatics Stadium, having immigrated in 2014 after excelling at the Maccabiah Games a year earlier and in 2009.

Her coach sees her reaching the semifinals in the 100 meters freestyle. Murez, who will be one of six Israeli swimmers in Rio — three women and three men — isn’t making any predictions.

“I’m really just focused on swimming a personal-best time,” she said. “It’s hard to know what it’ll take to swim a semifinal or a final. The best you can do is swim your own race.” 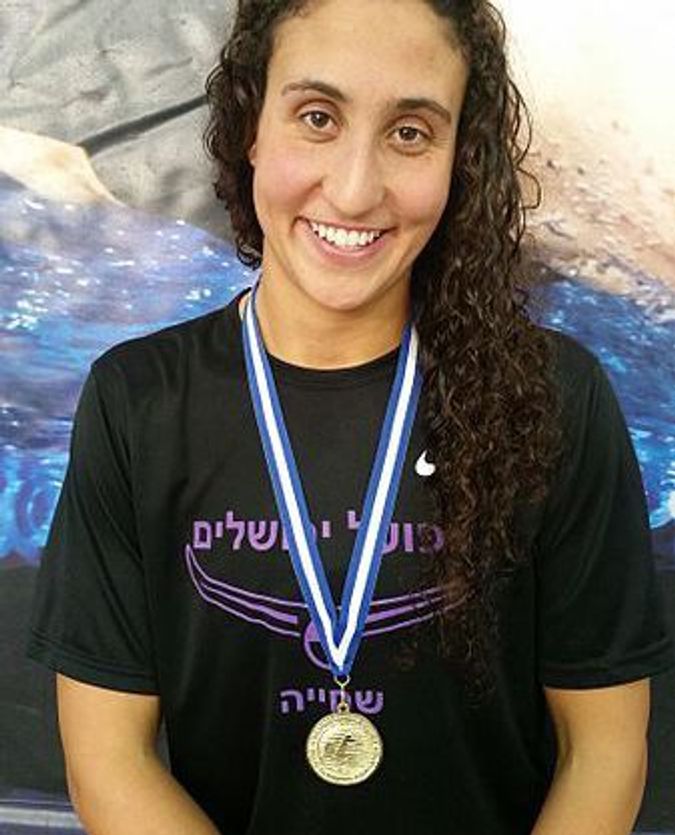 Murez, who stands 6-foot-1, will compete in three additional events in Rio: the 50- and 200-meter freestyle and the 100-meter backstroke.

She has been excelling in the water since she and her older brother, Zachary, first took up swimming as children at the condo pool of their paternal grandfather, Joe, a swimmer in the 1930s for Hakoach, the legendary Jewish sports club in his native Vienna.

At 7, Murez completed the compulsory 100-meter swim in her county’s junior lifeguard program. She reached the time requirement on her third try.

At a lifeguard’s suggestion, Melanie and James Murez enrolled the siblings in a swim club. Murez was more passionate then about karate. She took lessons six days a week beginning at age 3 at a studio in the same building as one of the synagogues in Venice, California, the family attended.

But Murez progressed nicely in the pool. At 12, as a spectator, she attended the U.S. Olympics swimming trials in 2004 in nearby Long Beach.

“You’re talented. You can make it at 15. Start dreaming,” her coach at Team Santa Monica, Rachel Stratton-Mills, told her there.

Murez recalls thinking: “I realized I was getting to be the age where that’s possible.”

She competed at the 2009 Maccabiah Games in Israel, her grandfather and parents in attendance, then swam for a strong Stanford University team. Returning to the 2013 Maccabiah, Murez set multiple records in the very pool where she is practicing now and was selected the outstanding female athlete at the games.

But Murez remembers the games as much for how well she was treated by the Israelis, especially in 2013.

“They asked if I could swim here [as an Israeli], which was funny because I’d wanted to,” she said poolside before practice. “It seems like this is the best opportunity for me. I love it. It’s been the best experience. I wouldn’t have it any other way.”

Murez lives in apartment on the grounds of Wingate and spends much of her day training. In her free time, she said she has enjoyed visiting the Dead Sea and coastal places like Caesarea.

A human biology major at Stanford, Murez plans to enroll in Tel Aviv University’s medical school beginning in the fall of 2017, following the next Maccabiah, when she will be representing Israel.

Stratton-Mills said Murez at an early age enjoyed swimming but “didn’t take it too seriously, in a wonderful way.”

That changed, Stratton-Mills said, during a drill in which the coach placed pieces of paper in hats and instructed the swimmers to draw two: a stroke and a distance. Murez, who was about 11, drew the 500-meter butterfly — the “worst selection,” Stratton-Mills said.

In completing the assignment, however, “something clicked” for Murez, Stratton-Mills said.

“I saw her turn into a serious, high-level swimmer,” the coach said. “She handled everything from that point forward with the attitude of ‘I can do this.’”

Stratton-Mills, who now coaches with her husband in Cleveland, has stayed close with the family. In preparation for Rio, she’s been sending Murez workout tips: speed and aerobics training, attention to fundamentals, and other instructions.

Stratton-Mills won’t be going to Brazil, but Murez will have plenty of fans there: her parents and brother, along with other relatives, including one from nearby Argentina.

Melanie and James Murez are no strangers to the Olympics. They had met just prior to the 1984 Summer Games, when she worked for the Los Angeles Olympic Organizing Committee, in charge of the cadre of interpreters. Melanie recruited James as a technology consultant. Melanie’s all-access pass enabled entry to all venues; she watched some swimming.

“I don’t know if my seats will be as good this time,” she joked.

Regardless of what the ticket says, of course, the view promises to be far better at these Olympics.

“I never thought I’d have a child go to the Olympics, so it’s amazing,” she said. “It’s definitely a cycle and a circle.”

So just how can Murez, who this winter will be inducted into the Southern California Jewish Sports Hall of Fame, reach the 100-meter semis?

Her coach, Leonid Kaufman, estimates that Murez must shave a fifth of a second off her personal best of 54.40 seconds and cut that to 54.0 to qualify for the finals. Should that happen, he said, “she’ll be a national heroine.”

“That’s the goal, to be in the top 16 in the world,” said Kaufman, who also coaches the Israeli team. “She can do it.”

“It’s not just to make the Olympics, but to reach the semifinals,” added Kaufman. “We’re working hard to get there. It would be a huge achievement.”