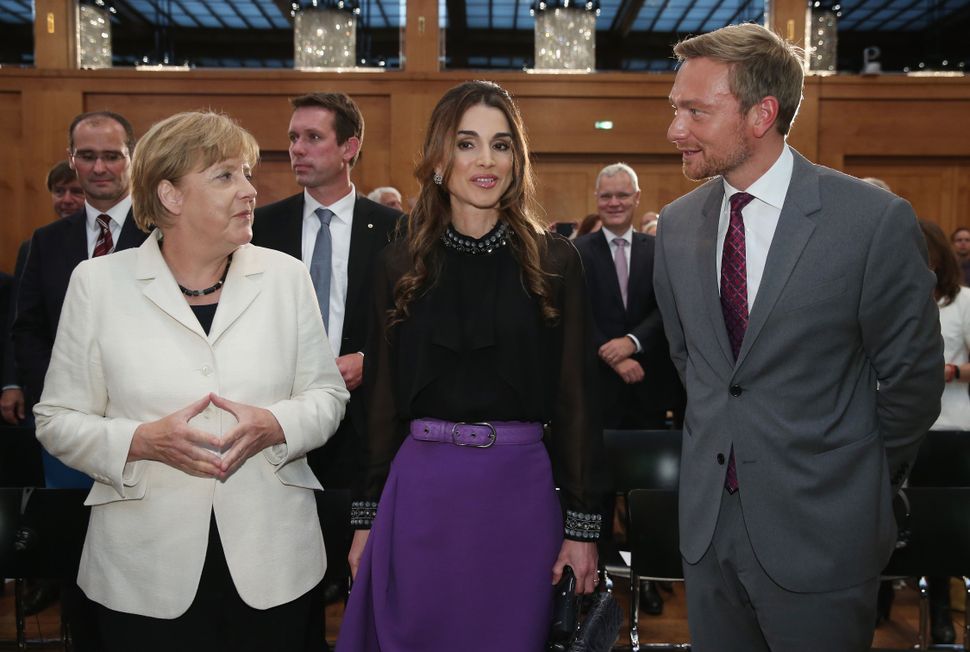 Prized: Christian Lindner pictured with Queen Rania of Jordan and premier Angela Merkel at an award ceremony in September 2015. Image by Getty Images

The leader of Germany’s liberal Free Democrats (FDP) likened Turkish President Tayyip Erdogan’s purge of state institutions to the actions of the Nazi party in the 1930s in comments published on Sunday.

FDP leader Christian Lindner said he saw parallels between Erdogan’s behavior and aftermath of the Reichstag fire in 1933 portrayed by the Nazis as a Communist plot against the government and used by Adolf Hitler to justify massively curtailing civil liberties.

“We are experiencing a coup d’etat from above like in 1933 after the Reichstag fire. He is building an authoritarian regime tailored solely to himself,” Lindner told the Bild am Sonntag.

“Because the rights and freedoms of the individual no longer play a role, he cannot be a partner for Europe,” he added.

His comments echo those of Austria’s far-right Heinz-Christian Strache who said on Saturday that Erdogan’s use of the failed putsch in July to crack down on his opponents was reminiscent of Hitler’s use of the Reichstag blaze to amass greater power.

Erdogan has angrily rejected suggestions that he or his government might have been behind the failed coup, which he has blamed on the followers of a U.S.-based Muslim cleric. Erdogan narrowly avoided capture and possible death on the night of the attempted coup.

The FDP are not currently represented in Germany’s Bundestag but have previously governed as a junior coalition partner to Chancellor Angela Merkel’s conservatives (CDU) and are a potential ally for them after federal elections in autumn 2017.

However, Lindner criticized Merkel’s response so far to the crackdown on Erdogan’s opponents in the army, civil service, academia and media.

“It disgusts me that the EU accession talks (for Turkey) have not been ended long ago. But Mrs Merkel is only cautiously urging ‘proportionality’,” he said.

Germany’s foreign minister on Friday resisted a push by Austria to halt the talks with Turkey on joining the European Union, saying the bloc needed to think more broadly about how to frame its relationship with Ankara in troubled times.