Gold for Aly Raisman and the ‘Final Five’ 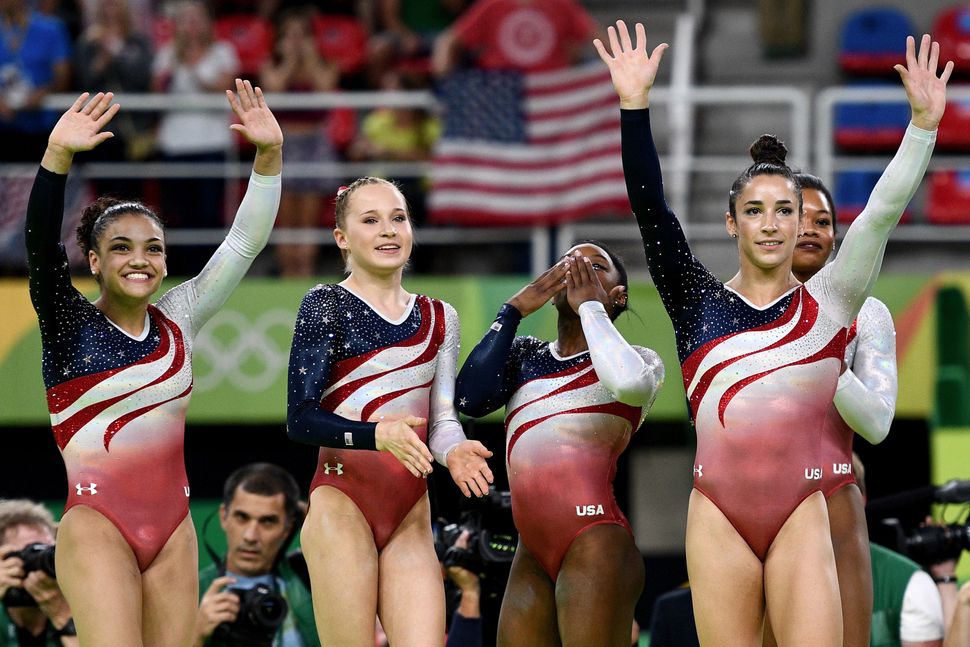 There were a few wobbles here and there, even for Simone Biles, but those imperfections could not stop the United States from blowing away the opposition to capture the Olympic women’s team title with a record margin on Tuesday.

Dubbing themselves the ‘Final Five’, Biles, Gabby Douglas, Aly Raisman, Laurie Hernandez and Madison Kocian proved that they are an untouchable force in gymnastics as they tumbled and soared to victory with a total of 184.897 points.

In a sport where tenths of a point can mean the difference between a gold and no medal at all, their winning margin of 8.209 points was a blowout.

In fact there was only 4.601 separating silver medalists Russia from last-placed finalist Brazil. China trailed the Russians by just 0.685 of a point to finish with bronze.

The Americans’ victory, along with the new moniker, was the perfect departing gift for retiring U.S. head coach Marta Karolyi, who burst into tears as she watched her adopted country win back-to-back team golds for the first time.

“I know it means the world to her… she was just so excited at the end … she started crying, it was so cute,” three-times world all-around champion Biles told reporters as she flashed a megawatt smile.

“We just thought the name was perfect because it is Marta’s last year and we are the ‘final five’ for her and it is amazing to end it off with her like this.”

Surprisingly the 19-year-old Biles, who is tipped to win five golds in Rio, earned the lowest mark of 12 performances for the Americans, drawing 14.800 on the asymmetric bars after hesitating for a split second midway through her routine.

Biles also had to whirl her arms around to stay on the balance beam after a sequence of three backflips left her wobbling on the four-inch wide apparatus.

But despite those glitches, the ‘Final Five’ soared so far out of sight of their rivals that the other teams must have felt they needed to board a supersonic jet to catch them. And even if they did, it would have been a lost cause.

“We were trying for silver. That’s what we were aiming for,” summed up China’s Shang Chunsong.

The collective strength of the Americans — with Kocian securing the team’s highest mark of the day (15.933) with her high-flying bars routine — left Biles needing to overhaul a paltry target of just 7.591 with her final floor performance to secure the first Olympic gold of her career.

It was little wonder that her team mates were already hugging and whooping for joy even before she had begun her hip-swinging routine to the beats of Samba music.

Biles’ explosive tumbling passes — which included her trademark soaring double layout with a half twist at the end — had the Brazilian crowd roaring their approval. When she completed her final landing, it was not a case of if the U.S. were champions but by how much.

“We set the standard and we’re not going down. We just improve the quality and everybody needs to follow us. If you try to run, it’s hard to catch up,” U.S. coach Mihai Brestyan said.

For Douglas and Raisman, it was a second successive team gold as they were also members of the triumphant ‘Fierce Five’ at the 2012 London Games.

“It feels amazing, especially to be alongside Aly … we did this again and history again. It is just phenomenal,” 2012 all-around champion Douglas said.

Before Tuesday, the previous biggest winning margin under the open-ended scoring system, which was introduced to the sport in 2006, came at the 2014 world championships when the Americans beat China by 6.693 points.
—Reuters

Gold for Aly Raisman and the ‘Final Five’