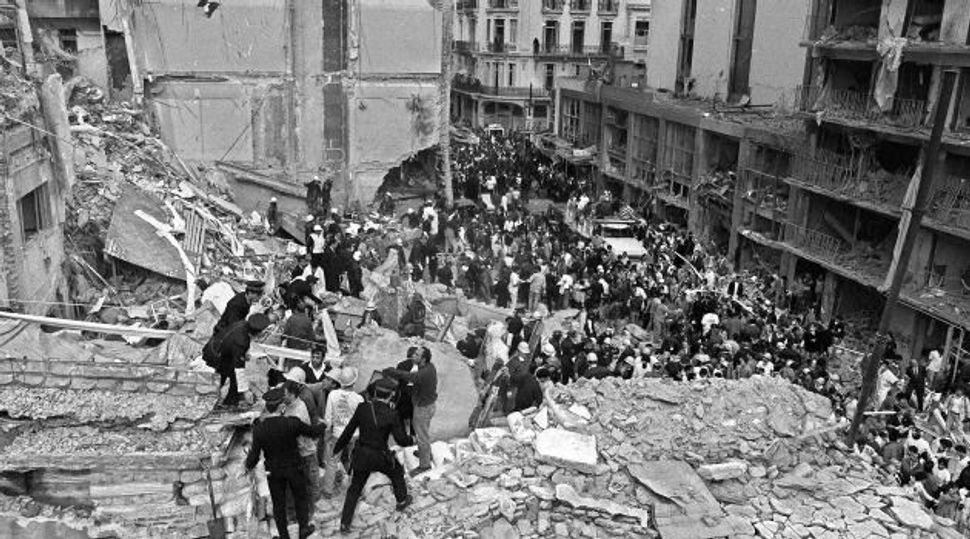 BUENOS AIRES, Argentina — The only unidentified fatality of the 1994 bombing of the AMIA Jewish center here has been named.

Augusto Daniel Jesus was identified as the victim with more than 99.99 percent certainty based on an analysis of DNA taken from the body and from his mother, according to the Argentina government’s AMIA Special Investigating Unit, which announced the identification Wednesday.

Jesus and his mother were among the 85 people killed and 300 were injured in the solo suicide bombing — most but not all of them Jews.

Argentina has accused Hezbollah of carrying out the attack at the direction of Iran. No arrests have been made, and the investigation has been plagued with charges of incompetence and corruption.

The DNA analysis was conducted by the Argentine Forensic Anthropology Team and verified by the team along with the University of Buenos Aires. Efforts to identify the body began in 2002 after Jesus’ identity card was discovered in the debris at the scene.

Some believed the body may have belonged to the suicide bomber, but the theory has now been discredited.

Jesus and his mother were attending a class at AMIA on caring for people with health problems when they were killed, according to relatives. Jesus was 20 years old.

Argentina is home to some 230,000 Jews, according to the World Jewish Congress, the largest community in Latin America and the sixth largest in the world outside Israel.

Sabrina Namer, Roberto Salum and Leonardo Filippini have led the AMIA Special Investigatory Unit since their predecessor, Alberto Nisman, was found dead of a gunshot wound last year in his apartment in Buenos Aires. He had accused then-President Cristina Fernandez de Kirchner and other senior officials of secretly covering up Iran’s involvement in the bombing. Kirchner denied the allegations and judges threw out the case, but it was reopened this month.

The nature of Nisman’s death, whether murder or suicide, remains a mystery. Six Iranians have been on the Interpol international police agency’s most wanted list in connection with the bombing since 2007.

The government “talked a lot but did very little” over the past 22 years, said Sofia Guterman, whose daughter Andrea was killed in the attack, on the anniversary last month. “It is time that it promises less and solves more.”

Immediately after taking office last year, Argentine President Mauricio Macri canceled the controversial memorandum of understanding between Argentina and Iran agreed to under Kirchner to jointly investigate the bombing.