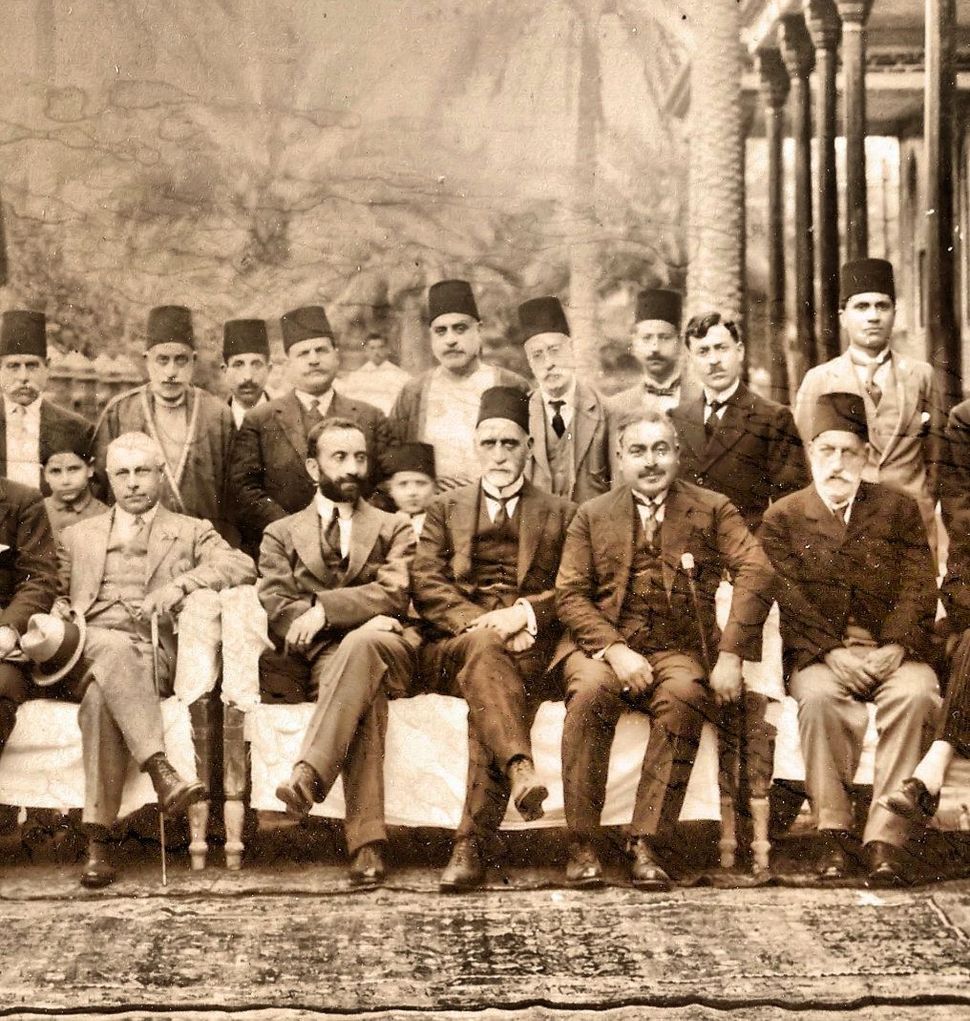 Finance minister Yechezkel Sasson, center, with other dignitaries of pre-war Iraq, including King Faisal I to his left.

— Iraqi intellectuals decried the demolition of a historical building that used to be the home of a Jewish finance minister as a “catastrophe” against historical preservation.

The 19th-century villa of Yechezkel Sasson on A-Rashid Street in the Iraqi capital of Baghdad was bulldozed last Friday even though it was earmarked for preservation as a historical monument, the Israeli newspaper Maariv reported.

Its demolition prompted condemnations online and on social media by intellectuals who said it was indicative of corruption under Prime Minister Haider al-Abadi.

Sasson, who died in 1932, is held by many in the country in high esteem as a patriot and an accomplished civil servant.

“Seen in the context of the urban history, heritage and architecture of Baghdad, the demolition of the Sasson residence is a catastrophe,” Adel al-Ardawi, a historian specializing in Iraqi heritage, was quoted in an expose by Maariv published Thursday. “If the rule of law were a reality, the people responsible for changing Iraq with such actions would’ve been harshly punished.”

The villa, located on a desirable riverbank street, was sold to a developer who had it torn down to make room for a high-rise apartment complex, according to Maariv.

Nabil al-Rube’I, an Iraqi historian specializing in the history of Babylonian Jewry, told Maariv that “the news of the demolition was received [in Baghdad] with great sadness,” adding: “Every Iraqi intellectual, or even just anyone interested in the country’s past, knows who Yechezkel Sasson was.”

He sarcastically added: “I would like to thank our country, our government and its institutions for its honoring, with the demolition, of Sasson’s great contribution as a devoted civil servant who acted in good faith and honesty with public funds.”

Heritage sites of all stripes have been neglected and plundered in Iraq since the overthrow in 2003 of the dictatorship of Saddam Hussein, who had ruled the country since 1979. But “this is especially true for Jewish sites,” al-Rube’I said.

The demolition moved a young poet, Mohammed al-Rakabi, to write a protest poem, which was shared online.

“Sasson, your abode is in our heart. Love remains and will not die in chains. He you been born in a country that recognizes its founders, it would not have given rise to ignoramuses turned masters,” reads the poem.

Iraq’s tourism ministry blamed the municipality for the demolition, which the ministry said the city approved illegally.

Sasson, also known as Sir Sassoon Eskell, is buried in Paris. He was born in 1860 and attended the Alliance Jewish high school in Ottoman-ruled Baghdad until his father, lawyer Ezra Sasson, sent him to Istanbul to complete a law degree. He spoke Greek, German, French, Latin and English and served as an interpreter for the Baghdad district administration, landing a senior position at the water administration service before his election in 1908 to the city council as an alderman.

Favored by the Ottoman rulers of Iraq, he served for two terms before he was appointed a special advisor to the agricultural and trade ministry and later, when he was 61, as finance minister. He died 11 years later, while still presiding as the chairman of the local parliament’s finance committee. His private library was at one point one of Iraq’s finest but it was plundered and the collection was lost after 2003.