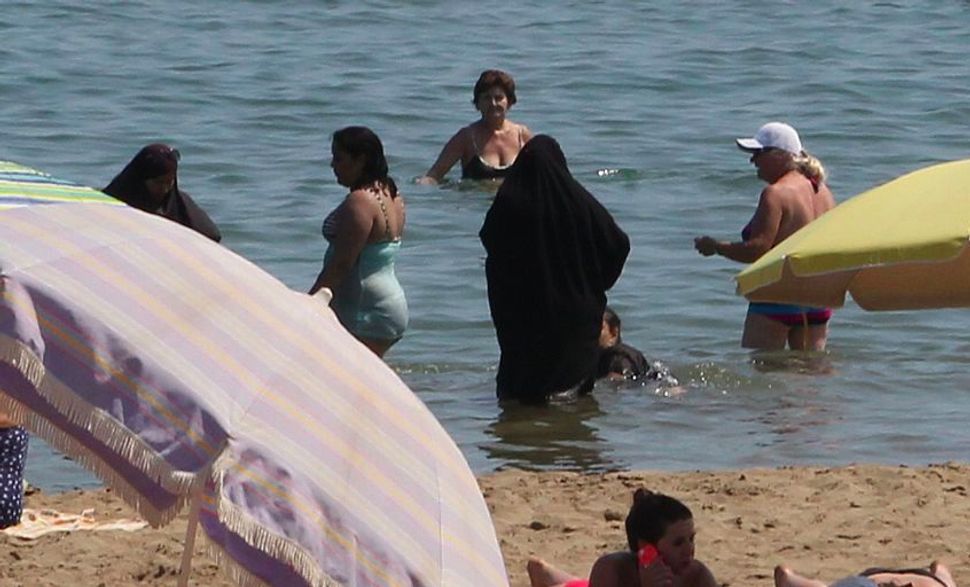 — A senior Paris rabbi defended a string of controversial municipal bans in France on wearing publically the full-body swimsuit known as burkini.

Moshe Sebbag, the rabbi of the Grand Synagogue of Paris, told JTA Tuesday he supported in principle the regulations adopted earlier this month in 15 French municipalities, including the famed beach resort Cannes, against the garb, which French Prime Minister Manuel Valls last week said was part of a “political project” to perpetuate female servitude.

“It’s a complicated subject and both sides have compelling arguments,” Sebbag said during an interview. While the French state is a “secular country with freedom of religion,” he said, the mayors in question “understood this is not about women’s liberty to dress modestly, but a statement as to who will rule here tomorrow,” Sebbag said. This owed to recent jihadist terror attacks in France, he added.

“They understand today there’s a religious war, a takeover of the secular establishment of the French republic and this is what they find unacceptable,” Sebbag said. Asked if he agrees with the burkini bans, he said: “Yes, because you see that going with it [a burkini] is not innocent, it’s sending a message.”

Sebbag’s defense of the ban follows criticism of it by some left-wing Jews, including by the Jewish French Union for Peace – a far-left organization that supports a blanket boycott of Israel and whose co-president Pierre Stambul opposes Jewish immigration to Israel as a form of “colonization of Palestine.” His group in a statement last week called the burkini bans “racist to Muslims” and potentially damaging to Jewish communities. The group condemned “the silence of Christian faith leaders and especially Jewish ones.”

The issue of wearing religious costumes in the public sphere is a divisive one in France, where in 2010 the country’s Senate passed a law banning wearing face-covering garb such as the burka. The burka ban, which exists also in Belgium and the Netherlands, has left many Western European Jews concerned that it would lead to the passing of measures also limiting the wearing of Jewish symbols in public.

But these restrictive measures have become increasingly popular amid a proliferation of Islamic terrorist attacks, including a series of bombings in Brussels in March and the slaying of dozens of people last month in the southern French city of Nice, near Cannes.

Sebbag said the burkini ban would have no effect on the local Jewish population, where he said that women who judge it immodest to wear a revealing swimsuits “find other solutions” to the issue than wearing a burkini-like garb.

In Israel, many observant Jewish women wear a dress-like swimsuit to gender-segregated beaches. Its hem ending above the knee, it is more revealing than the burkini, which is typically worn with swim leggings and a head-cover piece.