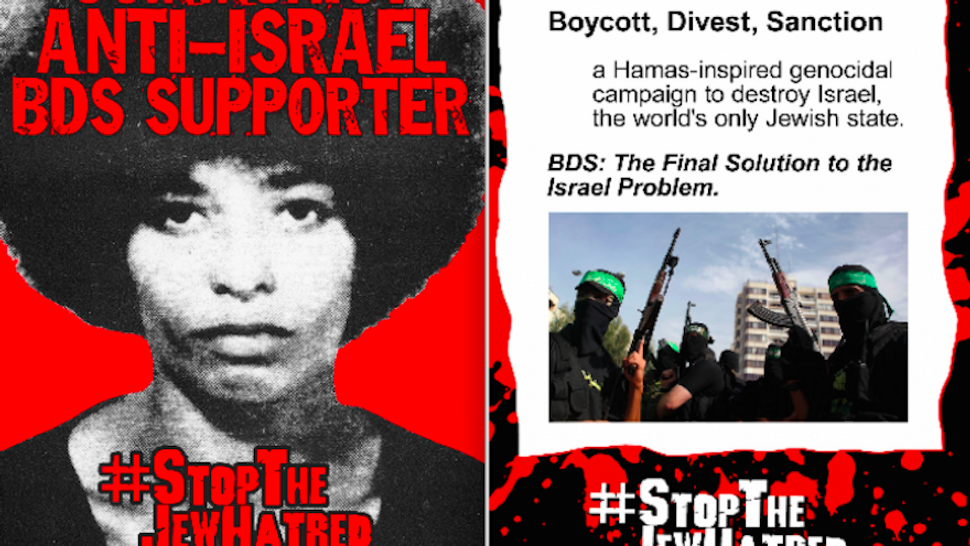 — A Jewish group founded by casino magnate Sheldon Adelson and other Jewish donors to fight the Boycott, Divestment and Sanctions movement against Israel on campus said it regrets that a grant it provided funded a poster campaign that targeted pro-Palestinian student activists as “Jew haters” and terrorists’ allies.

The Maccabee Task Force issued its disavowal of the poster campaign Monday after the Los Angeles Times reported the link between it and the David Horowitz Freedom Center, which launched the campaign in February.

The David Horowitz Freedom Center is a conservative foundation based in Los Angeles.

“The Maccabee Task Force did approve a modest grant to the David Horowitz Freedom Center to focus on the true nature of pro-BDS organizations, but we did not ask for or approve the poster campaign that targeted student activists, and were not aware that our money had been used to support it. It should not have been,” Maccabee Task Force Executive Director David Brog said in a statement issued Monday.

“The Maccabee Task Force does not believe that focusing on student activists who conduct themselves civilly is an appropriate or effective way to combat the BDS movement on campus. Focusing on the true nature of anti-Israel and anti-Semitic groups like SJP (Students for Justice in Palestine), however, remains a core component of our approach and we will continue to fund efforts that expose those organizations and their leadership,” Brog also said.

The posters were condemned by some Jewish student groups, including J Street U and Jewish Voice for Peace; the latter backs the BDS movement.

One poster, which appeared on the University of California, Santa Barbara campus, included the names of prominent campus BDS activists and said, “The following students and faculty at UC Santa Barbara have allied themselves with Palestinian terrorists to perpetrate BDS and Jew Hatred on this campus.”

Horowitz did not disclose to the Times the amount of the grant he received from the task force, but said it helped pay for a poster campaign on five University of California campuses. He told the newspaper he plans to continue the poster campaign, as well as other activities on 17 campuses, including six in California this fall.

Adelson, the casino operator and pro-Israel philanthropist, launched the Maccabee Task Force at a summit in Las Vegas in 2015 that brought together other philanthropists each willing to donate $1 million to the project.