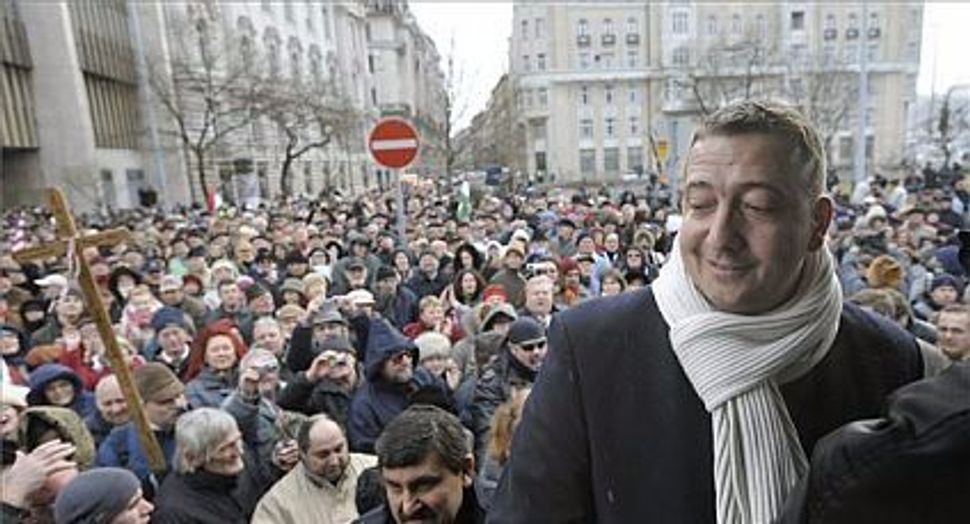 – The U.S. Holocaust Memorial Museum slammed the decision by the Hungarian state to grant a prestigious award to Zsolt Bayer, a journalist long criticized for articles deemed racist and anti-Semitic.

The state awarded Bayer the Knights Cross of the Order of Merit last week.

“This award is intended to recognize individuals who demonstrate excellence in service to the country and ‘the promotion of universal human values,’” the museum said in a statement. “Bayer has a long record of racist speech and has written highly provocative anti-Semitic and anti-Roma articles in the Hungarian media.”

“He has referred to Jews as ‘stinking excrement’ and has written hateful pieces about the Roma, calling them ‘animals’ that ‘should not be allowed to exist,’” the museum statement added.

The museum called on Prime Minister Viktor Orban, who heads the Fidesz party, and President Janos Ader to rescind the award “immediately.” Presenting it, the museum said, “reflects the long-standing refusal of the leadership of Hungary’s ruling Fidesz Party to distance itself from Bayer, in spite of Bayer’s repeated pattern of racist, xenophobic, anti-Semitic, and anti-Roma incitement.”

On Monday, Andras Heisler, the president of Hungary’s main Jewish umbrella organization, Mazsihisz, joined at least two dozen Hungarian recipients of the same honor who returned their own awards in protest.

“I was proud of this award and thought that it would serve to strengthen the moral values that spring from a diverse range of people, people of different faiths, people who support different political sides; I received this award together with representatives of a broad range of religious institutions,” Heisler, who received his Knights Cross in 2011, wrote on Facebook. “This represented to me the value of diversity; and valuing each other’s views represents the future of Hungary.”

“The presentation of the honor to Bayer contradicted these values,” he wrote. “I value diversity, but not destructive extremism. I do not wish to belong to any community to which Zsolt Bayer belongs, even virtually.”