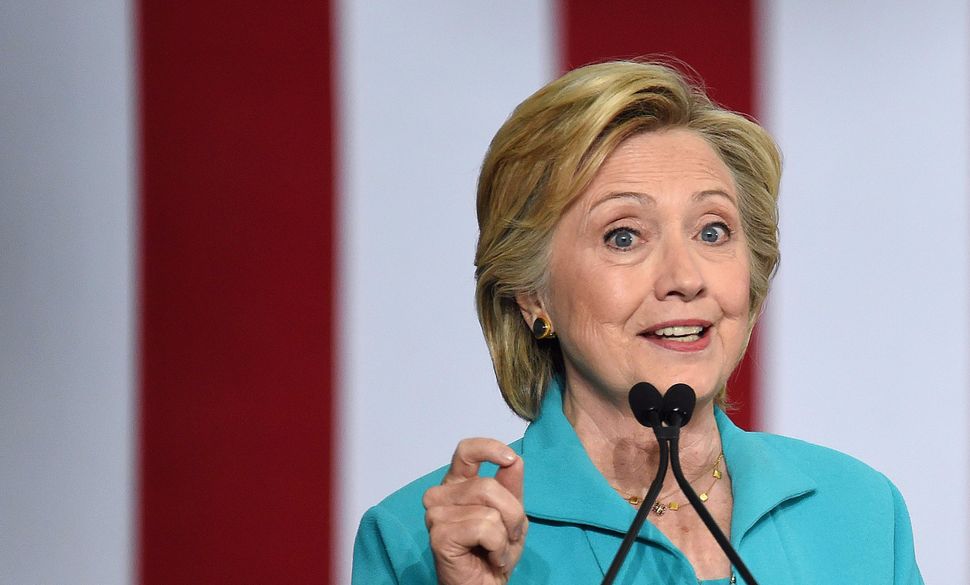 Democratic presidential nominee Hillary Clinton accused Donald Trump on Thursday of fueling America’s “radical fringe” with racist rhetoric, even as her Republican rival sought to soften his image with an appeal to minorities.

Clinton needs to retain support from black and Latino voters to win the Nov. 8 election, the same coalition that helped propel Democrat Barack Obama to the White House in 2008. Trump, whose support comes mainly from whites, is unlikely to be victorious unless he can cut into that support.

“Donald Trump has built his campaign on prejudice and paranoia,” Clinton said in a scathing speech in Nevada. “He’s taking hate groups mainstream and helping a radical fringe take over one of America’s two major political parties.”

“This is a moment of reckoning for every Republican dismayed that the Party of Lincoln has become the Party of Trump,” Clinton said, referring to Abraham Lincoln, the first Republican president, who issued the Emancipation Proclamation and championed the 13th Amendment to the U.S. Constitution during the Civil War that led to the abolition of slavery in 1865.

Trump, who trails Clinton in national opinion polls, has polled poorly with minorities and has been criticized for his proposals on immigration, which include deporting millions of undocumented foreigners, building a wall along the Mexican border, and suspending Muslim immigration to shore up national security.

He described some Mexican immigrants as “criminals and rapists” in a 2015 speech launching his candidacy and more recently questioned the impartiality of an American-born judge of Mexican heritage.

“When Trump was asked about anti-Semitic slurs and death threats coming from his supporters, he refused to condemn them,” Clinton said. “Through it all, he has continued pushing discredited conspiracy theories with racist undertones.”

Clinton ticked off a string of Trump’s campaign incidents with anti-Semitic overtones, including his tweeting an image of her alongside a Star of David and a pile of cash.

“His campaign famously posted an anti-Semitic image – a Star of David imposed over a sea of dollar bills – that first appeared on a white supremacist website,” she said.

She also slammed him for hiring new campaign chief Stephen Bannon, the Breitbart News chief who has boasted of his ties to far right groups.

“The de facto merger between Breitbart and the Trump campaign represents a landmark achievement for the alt-right,” Clinton told her supporters. “A fringe element has effectively taken over the Republican Party.”

On Thursday, the New York real estate mogul-turned-politician criticized Clinton before her speech, saying she and her party had let black Americans down with failed economic policies and were falsely labeling Republicans as bigoted.

At a Mississippi rally on Wednesday, Trump called Clinton a “bigot who sees people of color only as votes, not as human beings.”

He argued on Thursday that Clinton’s opposition to charter schools and vouchers locked minority students in failing jobs, that her tax policies would hurt black-owned businesses and that she would allow immigrants to take jobs from minorities.

Trump said the Clinton attacks were not only an assault on him, but on all his supporters – people, he said, who want strong borders and security.

“To Hillary Clinton, and to her donors and advisers, pushing her to spread smears and her lies about decent people, I have three words … shame on you.”

A Reuters/Ipsos States of the Nation poll for the week beginning Aug. 15 found Clinton beating Trump among Hispanic voters by 15 percentage points, and by 57 percentage points among black voters.

Trump has tried recently to broaden his appeal to them, hinting at a softening of his hardline position on immigration.

In comments broadcast on Fox News on Wednesday night, Trump said he would be willing to work with immigrants who have abided by U.S. laws while living in the country, backing away from his insistence during the primaries that he would try to deport all 11 million illegal immigrants.

Trump also met with black and Latino Republican leaders at his headquarters in New York City on Thursday morning.

Trump’s efforts were unlikely to draw out minorities in his favor but could reassure some moderate Republicans worried about his views on race, said Bernard Fraga, a political science professor at Indiana University.

“I don’t think these efforts will do a lot to help him in minority communities,” Fraga said.

An association of 40 Latino organizations sent a letter on Thursday calling on him to “cease” his rhetoric and meet with their leadership to discuss ways he could improve his outreach to Hispanics.

“As we have expressed numerous times, your rhetoric of relentless attacks against our community is an issue of serious concern and has had a significant impact, fueling an alarming trend in our nation,” the letter reads.

Clinton released a video on Thursday ahead of her Nevada speech tying Trump to white supremacist groups. The video shows a Ku Klux Klan member praising Trump and plays a recording of former leader Klan leader David Duke calling on white people to vote for Trump.

Bannon told the magazine Mother Jones during the Republican National Convention last month that the website was “the platform for the alt-right,” a brand of U.S. political conservatism associated with white nationalism.

Trump’s campaign called for the Clinton campaign to withdraw the video.

“This type of rhetoric and repulsive advertising is revolting and completely beyond the pale,” Mark Burns, an African-American pastor who supports Trump, said in a statement. “I call on Hillary Clinton to disavow this video and her campaign for this sickening act that has no place in our world.”—Reuters