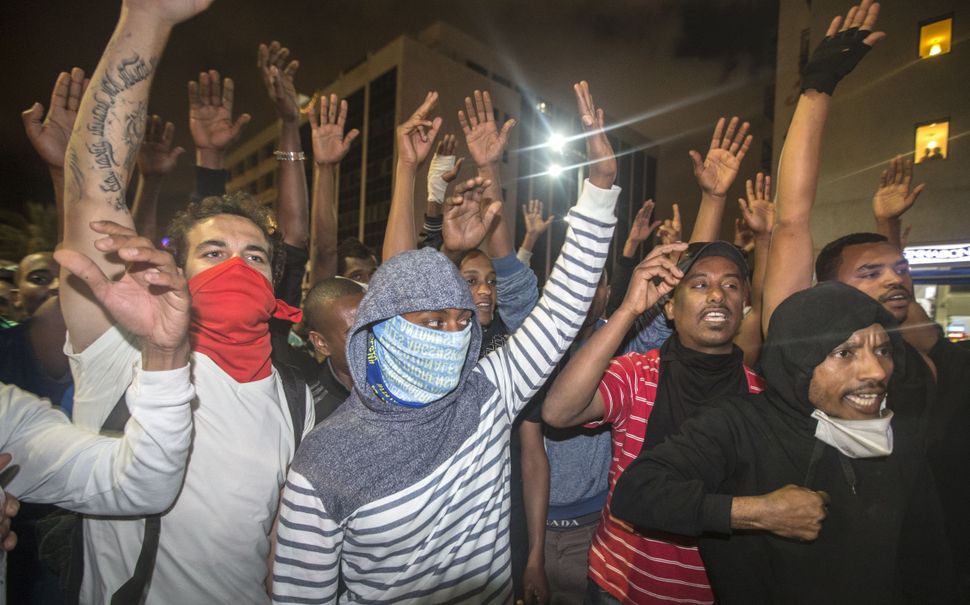 JERUSALEM — Activists and politicians called for the firing of Israel Police Chief Roni Alsheich after he called it “natural” for police to be more suspicious of Ethiopian Israelis than of other Israelis.

“Studies the world over, without exception, have shown that immigrants are invariably more involved in crime than others, and this should not come as a surprise,” Alsheich said Tuesday in Tel Aviv at a meeting of the Israel Bar Association. His comments were widely reported in the Israeli media.

The comments came in response to a question about accusations of police brutality and racial discrimination against Ethiopian Israelis. Alsheich also said that young people are involved in more crimes than others.

“When these two things come together,” he said speaking of Ethiopian heritage and youth, “it turns out that a particular community is more involved in crime than others, statistically speaking.”

Alsheich suggested that the same is true of Arab-Israelis and eastern Jerusalem Palestinians who deal with police officers.

Alsheich said that the police are working to curb “over-policing” in conjunction with leaders of the Ethiopian-Israeli community.  The police also have announced that officers will wear body cameras that will document all police interactions with the public, in an effort to increase confidence in the force.

A statement issued by the police on Tuesday evening said that Alsheich “did not intend to offend Israelis of Ethiopian origin. The remarks were said, openly, with the intention of correcting and improving” relations between the police and Ethiopian Israelis, the statement said.

Ayman Odeh, chairman of the Joint Arab List faction, said that the police “systematically mistreats the weaker sectors of the population.”

“The commissioner needs to be reminded that it’s his job to serve and provide security for all Israeli citizens, not just white Jews,” he said.

Opposition leaders and leaders of the Ethiopian-Israeli community also criticized Alsheich and called for his resignation or firing.

Last summer the Ethiopian-Israeli community and their supporters demonstrated against police brutality, including one in Tel Aviv in June that turned violent, which was protesting in part the closing of  the case against the Israeli police officer who was caught on camera beating an Ethiopian-Israeli soldier without charges.