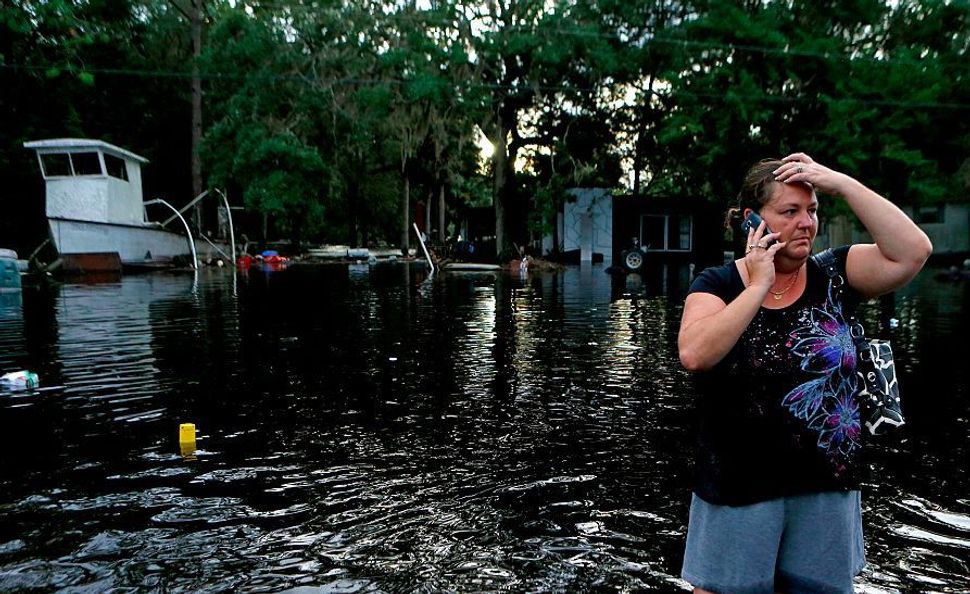 Wind and rain from Hurricane Hermine toppled trees and power lines along Florida’s northern Gulf Coast, inundating coastal areas with storm surges before it weakened to a tropical storm over land and plowed toward the Atlantic Coast on Friday.

Hermine made landfall early on Friday near St. Marks, Florida, 20 miles south of the capital of Tallahassee, dumping heavy rains and packing winds of 80 mph (130 km/h), leaving tens of thousands of households without power along Florida’s Gulf Coast.

No injuries were immediately reported. It was the first hurricane to make landfall in Florida since Wilma more than a decade ago.

A weakening Hermine moved across southern Georgia, blowing winds of 60 miles per hour (95 km) at 8 a.m. EDT, (noon GMT), according to the National Hurricane Center. The tropical storm was expected to reach the coastal Carolinas later Friday, then move offshore from North Carolina on Saturday. Forecasters said it could restrengthen over the sea.

In Cedar Key, an island community in northwest Florida, waters rose more than 9.5 feet (2.9 meters), among the highest surges ever seen, according to the National Weather Service (NWS) in Tallahassee.

“It is a mess,” Virgil Sandlin, the Cedar Key police chief told the Weather Channel television network. “We have high water in numerous places.”

Some 170,000 people were without power in the affected region on Friday morning, WCTV television in Tallahassee reported. More than half of Tallahassee had lost power, the NWS said.

By Friday morning, the storm barreled across southeastern Georgia, where thousands were without power.

On its current path, the storm could dump as much as 15 inches (38 cm) of rain on coastal Georgia, which was under a tropical storm watch, and the Carolinas. Forecasters warned of “life-threatening” floods and flash floods.

The governors of Georgia and North Carolina declared emergencies in affected regions.

A tropical storm watch extended north to New Jersey with Hermine expected to be felt over the U.S. Labor Day holiday weekend by tens of millions of Americans living along the Atlantic Coast.

Yet as it made its way north, the storm whipped up heavy rain across Florida’s Gulf Coast on Friday morning. Communities as far south as Tampa shut roads due to flooding.

Schools in 35 of the state’s 67 counties were closed, Florida Governor Rick Scott said on Twitter. In advance of the storm, he had declared a state of emergency in 51 counties.

As the sun rose on Friday morning on Hudson Beach, just north of Tampa, cars sat askew in the middle of flooded out roads. Palm fronds, tree branches and garbage cans were scattered about.

Overnight, Pasco County crews rescued 18 people and brought them to shelters after their homes were flooded in Hudson Beach and nearby Green Key.

Richard Jewett, 68, was rescued from his home in nearby New Port Richey, around 1:30 a.m. EDT (730 GMT) on Friday as emergency workers carried out a mandatory evacuation.

“The canal started creeping up toward the house and even though it wasn’t high tide it looked like it was coming inside,” he said.—Reuters