Women of the Wall Pray Under Police Presence 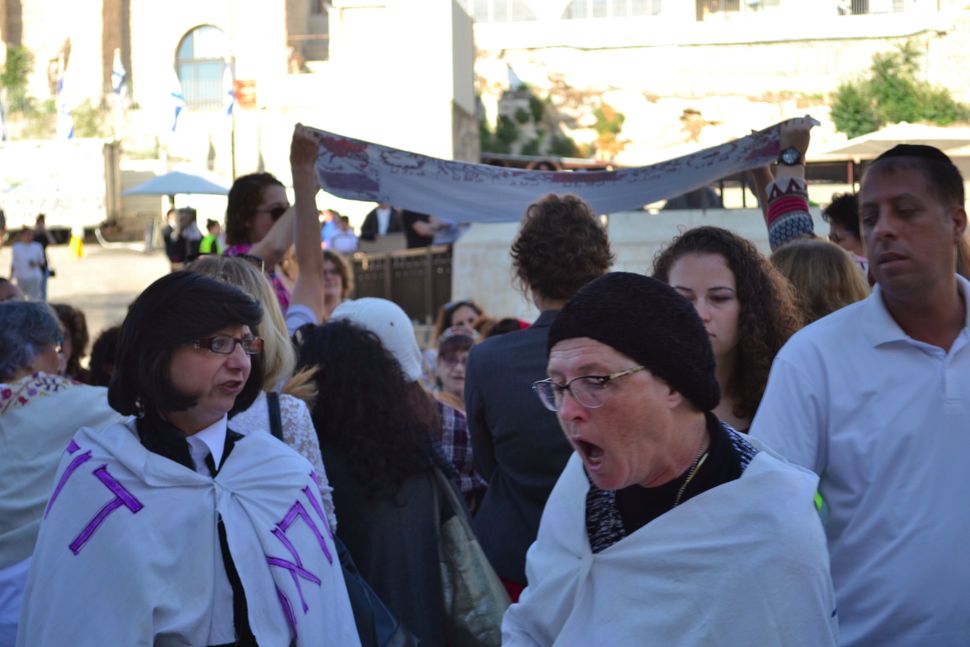 Ultra-Orthodox women wrapped in protest signs yell as Women of the Wall conducts a bat mitzvah in the background on September 4. Image by Naomi Zeveloff

Women of the Wall prayed under police presence at the Western Wall this morning after the group complained to Israel’s attorney general about the lack of protection at their monthly prayer service.

The group, which advocates for equal prayer rights for men and women at Judaism’s holy site, was on edge ahead of its prayer service on Sunday, September 4, fearing a clash with ultra-Orthodox protesters.

Last month, WOW’s service was interrupted by ultra-Orthodox women who blew ear-splitting whistles for over an hour while the feminist group prayed. According to news reports, ushers at the site tried unsuccessfully to stop the women, while police stood by.

On Sunday, the protesters were back with their whistles, but were repeatedly stopped by ushers wearing florescent vests, who at one point formed a barrier between the protesters and the WOW group. 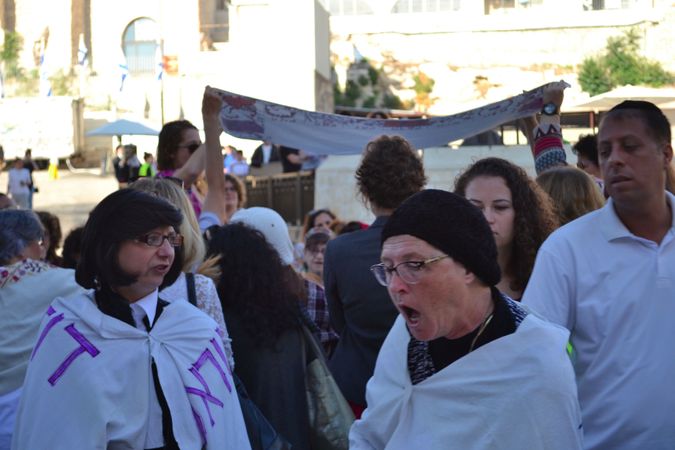 Ultra-Orthodox women wrapped in protest signs yell as Women of the Wall conducts a bat mitzvah in the background on September 4. Image by Naomi Zeveloff

In general, the feminist group said that the protesters had intensified over the past year. But WOW founder Anat Hoffman noted an increased police presence from the month before. It was a welcome sight for WOW members, who were concerned for their safety after Jerusalem police chief Yoram Halevy apparently told Hoffman that the group’s protection falls to the ushers at the Western Wall, not to the police.

Halevy’s statement prompted WOW to appeal to the attorney general. Hoffman said she saw the effects of the group’s petition at their prayer service Sunday.

“The police have come to their senses,” she said.

Police spokesman Micky Rosenfeld said that the police presence was “standard for the new month and police security assessments made.”

WOW’s prayer service included a short adult bat mitzvah service for 58-year-old WOW director, Lesley Sachs. The group attempted to bring its own Torah scroll into the Western Wall pavilion for Sachs to read from, but was prevented from doing so. According to the site’s regulations, private Torahs are prohibited, and women are barred from using those available at the Western Wall because they are located in the men’s section.

The women also blew shofars, the Jewish musical horn, in preparation for the Jewish New Year in October.

Though subdued by the ushers, the protesters made a show of countering the WOW prayers. A few ultra-Orthodox women blew whistles at the feminist group, which counted about three dozen people. One WOW member tried to grab a protester’s whistle before the ushers intervened.

One protester screamed that WOW was desecrating god’s name as the women prayed in skullcaps and prayer shawls. When the ushers stopped them from whistling the protesters slapped their hands on wooden podiums to disrupt the service.

Members of WOW wore yellow ear muffs donated by a supporter from the United States who was incensed by the whistle blowing at the previous month’s service.

The Western Wall has been a site of tension between pluralist and Orthodox Jews in recent months since a government plan to create an egalitarian prayer space for men and women near the traditional Western Wall stalled amid ultra-Orthodox protest.

WOW said it would move to the egalitarian prayer space. Another group calling itself Original Women of the Wall vowed to stay put.

Correction: An earlier version of this article incorrectly stated that Original Women of the Wall vowed to stay put until gender equality was reached at the Western Wall. The group plans to stay put no matter what.

Women of the Wall Pray Under Police Presence