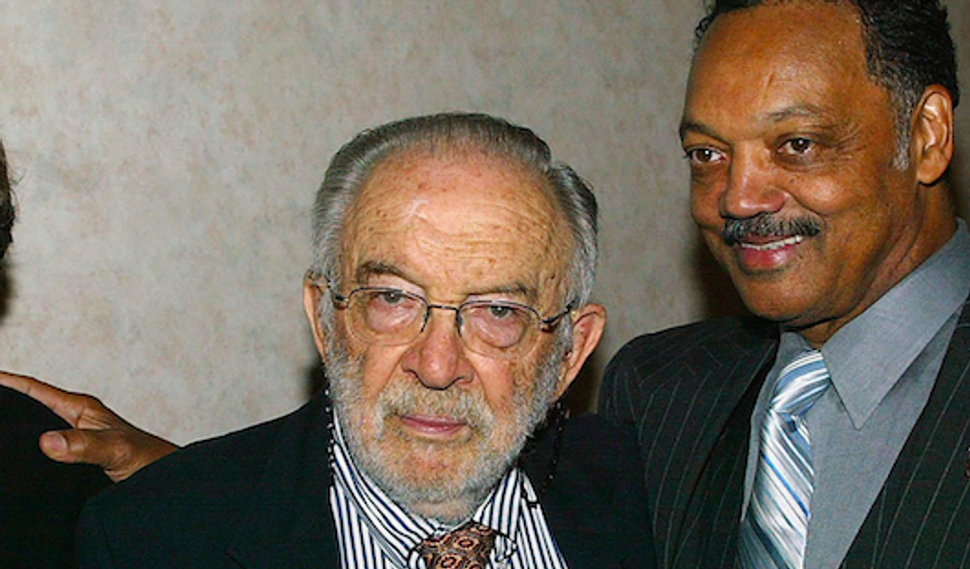 LOS ANGELES — Stanley Sheinbaum, who dedicated his life to the promotion and defense of liberal causes in the United States and the world, has died.

Sheinbaum, an activist for nearly 70 years, died Monday at his Los Angeles home. He was 96.

“Like a modern-day Forrest Gump – albeit one with a Phi Beta Kappa key – Sheinbaum has witnessed history up close and personal, leaving his thumbprints all over some of the defining moments of the past half century,” the Los Angeles Jewish Journal reported in a 2004 profile

Sheinbaum served as acting Los Angeles police commissioner in the early 1990s, leading the successful fight to oust former police chief Daryl Gates over the police beating of African-American taxi driver Rodney King, the Jewish Journal reported. He also led a controversial delegation of American Jews to the Middle East in the late 1980s to meet with Palestinian leader Yasser Arafat and to convince him to publicly renounce terrorism and recognize Israel’s right to exist.

He also fought for divestment from South Africa as a University of California regent; and raised nearly $1 million for the successful defense of Pentagon Papers principal Daniel Ellsberg.

“Sheinbaum has made a difference,” the Jewish Journal concluded.

The salons hosted by Stanley and his wife, Betty Warner Sheinbaum, in their spacious West Side home were gathering places for aspiring presidents, Middle East royalty, Hollywood stars, civil rights leaders and politicians.

That position was a long way from his birth in New York City. The son of a leather-goods manufacturer, who went bankrupt during the Depression, a young Stanley tried to help the family by selling magazines, working as a delivery boy and clerking in a department store.

He had no interest, and deplorable grades, in high school, as he recalled in his 2012 memoir. Its title, “Stanley K. Sheinbaum: A 20th Century Knight’s Quest for Peace, Civil Liberties and Economic Justice,” might also serve as a one-sentence summary of his life.

After six years in the army during World War II, spent mainly making maps, he applied for admission to 33 colleges but was turned down by all of them due to his failing and incomplete high school grades.

At 26, Sheinbaum went back and completed high school and then went on to graduate from Stanford University with highest honors as an economist, and won a Fulbright fellowship to study international monetary affairs in Paris.

Perhaps no single action by Sheinbaum drew more international attention – and flak – than his 1988 visit to Tunis to meet with Arafat. Sheinbaum was excoriated by large segments of the Jewish community and leadership as a traitor and a dead pig was deposited on his driveway.

Questioned on this point, the Jewish Journal reported Sheinbaum’s conviction that “As a Jew it was his duty to fight for peace in the Middle East,” and then quoting his remark, “These are my people and I’m not going to walk away.”