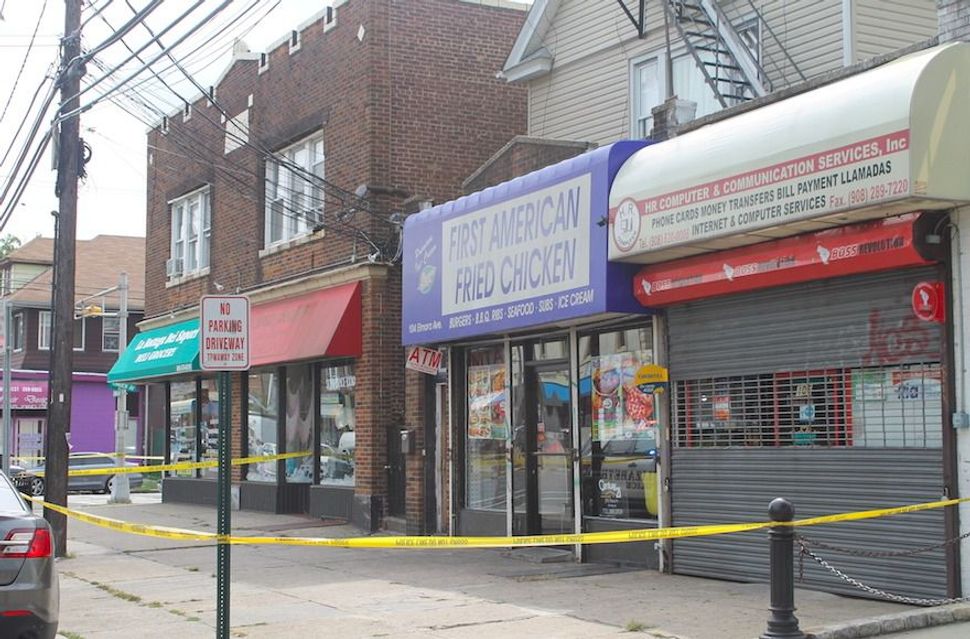 (JTA) — Ahmad Khan Rahami, the man who police say planted four bombs in Manhattan and New Jersey — including one in the train station here — used to come to the One Stop Kosher Market to buy snacks.

The market is a couple minutes’ walk down Elmora Avenue from First American Fried Chicken, the fast food restaurant run by Rahami’s family. Rahami stopped by a couple times, employees told Yaakov Weiss, who manages the market and works at the adjacent kosher restaurant, Avenue Grill and Sushi. Another employee recognized him from the picture in the news.

Weiss thought nothing of a Muslim man frequenting the market and restaurant. A 20-mile drive from New York City, this New Jersey bedroom community of some 125,000 residents is home to large communities of Muslims and Jews. Muslim men, Weiss said, come often for a taste of Middle Eastern cuisine.

“We are a shawarma, Middle Eastern place, so we have some different people coming in,” he said of the restaurant. “Most of the time they’re here to shop, get their Middle Eastern food — shawarma, lafa, falafel.”

On Monday Rahami, an Afghani American, was shot and arrested by police in the adjacent town of Linden. He is accused of planting two bombs in Manhattan’s Chelsea neighborhood, as well as the one at the train station and another in the New Jersey shore town of Seaside Park. The Seaside Park and one of the Chelsea bombs detonated Saturday; 29 people were injured in the Manhattan explosion, but none had lengthy hospital stays.

Members of the Orthodox Jewish community in Elizabeth, which has four Orthodox synagogues, were shaken but not surprised by the attacks. And while some said the bombings make the case for limiting the number of Muslim refugees entering the United States, they did not blame the local Muslim community for the attacks or suggest that their attitude toward their Muslim neighbors would change.

“Because it happened so close to home, I feel more vulnerable, just with a yeshiva and synagogue and another yeshiva and another school down the block,” said June Fooksman, whose 10-year-old daughter attends the Jewish Educational Center, a network of Orthodox day schools also located on Elmora Avenue. “I’m just going to believe that we’re going to be watched over. God’s gonna watch, and what is meant to be is going to be.”

Elmora is a quiet but busy commercial street featuring Jewish storefronts mixed in among shops with Spanish signs in the windows. On Tuesday, a day following Rahami’s arrest, First American Fried Chicken was closed, its entrance cordoned off with police tape. A bevy of news photographers sat chatting on a brick berm across the street.

Some Jewish residents suggested that the size of the Muslim community here, as well as in nearby North Jersey towns, means that another attack is not far off. Some compared the situation to the recurring waves of terror attacks in Israel.

“There’s plenty of them around here,” said Benayau Berez, 29, an Israeli employee at Avenue Grill and Sushi, referring to local Muslims. “It’s something you know is coming. You know how it is in Israel. It’s something that’s beginning. I don’t feel anything, but I see the panic that was here yesterday. I think it’s just the tip of the iceberg.”

But Weiss and others stressed that they don’t intend to change their relationships with Muslim friends and neighbors because of the attacks. Becky Sternglass, a receptionist at the Jewish Educational Center, sympathized with Rahami’s family but said if there are any further attacks, “everybody’s not going to like all the Muslims.”

Several people called for an increased police presence in Elizabeth. Berez and Weiss, who have children at the Jewish Educational Center, said the school had not bolstered security enough. Weiss complained that New Jersey law did not allow him to carry a handgun.

The Jewish Educational Center told JTA that it did bolster security on Monday, including doubling its security, identifying all visitors and keeping children indoors. Like many Jewish institutions in New Jersey, the school has received federal grants over the years to improve its security.

Gabe, 22, the manager of Jerusalem Restaurant, a pizza place across from Avenue Grill and Sushi, said being a Jewish establishment on Elmora Avenue “puts a big red target on the window.”

Weiss said it just shows that there are dangerous people out there.

“They’re running around, throwing pipe bombs,” he said. “God forbid, if someone comes in here, what do we have for our protection besides God? What are we going to do, throw plastic forks at them?”

But Ezra Cowan, a psychology graduate student at nearby Kean University, urged against additional security measures.

“What can you do?” he said. “You can get a policeman to stand by the shul. You could get everyone trained with arms for self-defense. You could do all those measures, which are probably a little outlandish.”

Instead, he said, “it’s just time for us to realize God protects us.”