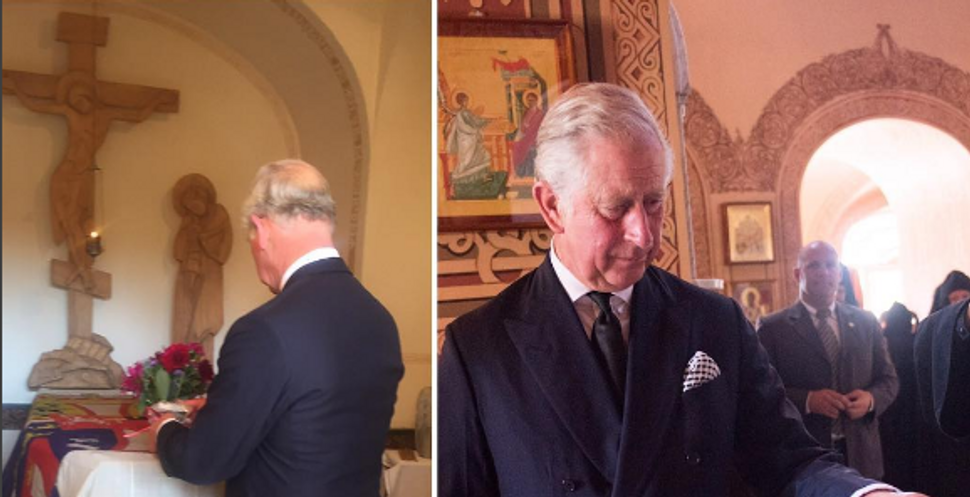 Charles, Prince of Wales, visited in secret the grave of his grandmother on the Mount of Olives in eastern Jerusalem.

The prince was in Israel on Friday for the funeral of Shimon Peres. Charles’ paternal grandmother, Princess Alice of Battenberg, is interred in the Church of Mary Magdalene on the Mount of Olives. She died in 1969 in London and was transferred to a crypt in the church in 1988 in accordance with her wishes.

The Prince of Wales visited Israel on Friday to attend the funeral of the former President, Shimon Peres, on behalf of The Queen. During his time in Israel, HRH was able to pay a personal visit to the graves of his grandmother Princess Alice of Battenberg and his great aunt The Grand Duchess Elizabeth of Russia. Both The Prince’s grandmother and great aunt were laid to rest in The Church of St. Mary Magdalen, on the Mount of Olives, Jerusalem.

Charles visited the grave later on Friday. No media was present, but some photos were later posted on social media, Haaretz reported.

Princess Alice, also known as Princess Andrew of Greece and Denmark, is the mother of Prince Philip, Duke of Edinburgh, the husband of Queen Elizabeth. During World War II, Alice lived in Athens, which was occupied by the Nazis in 1943. She is recognized as a Righteous Among the Nations for hiding a Greek Jewish family from the Nazis until the end of the Holocaust.

In general, the British royal family refrains from official visits to Israel except for state funerals; it does not recognize eastern Jerusalem as part of Israel.

The few royal visits to Israel have been defined as private. Prince Philip visited Israel in 1994 for a ceremony at the Yad Vashem Holocaust memorial to honor his mother. Prior to the ceremony, Philip and his sister, Princess Sophie, visited their mother’s coffin.