Ethiopian Jew Killed in Riots While Waiting To Leave for Israel 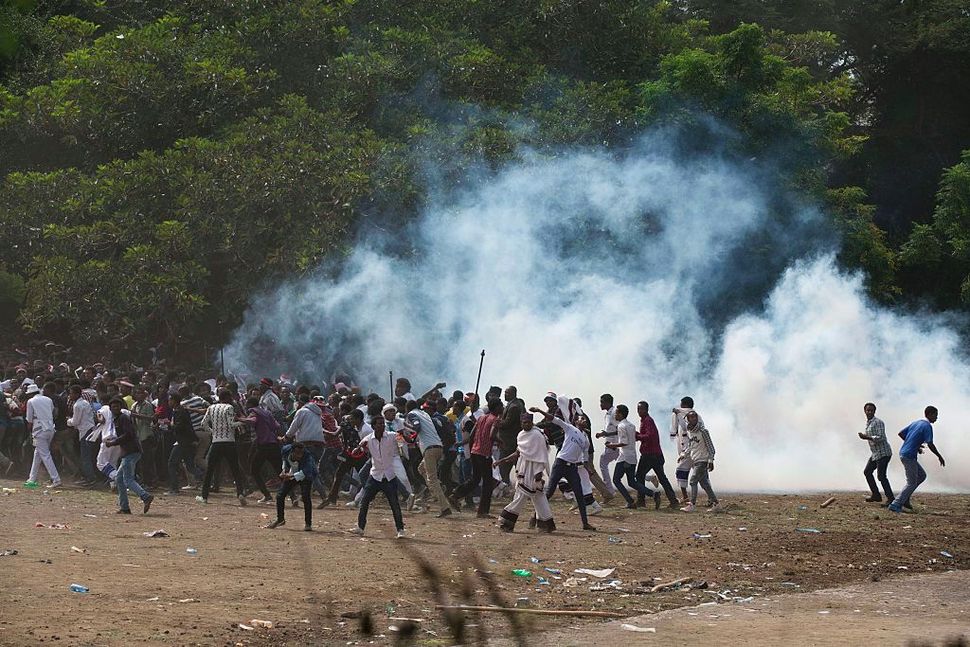 — The Jewish community of Gondar in Ethiopia said it lost one of its members in riots that have claimed dozens of lives in recent weeks.

The Jew killed in Gondar was identified as Weta Chekla, the Israel-based news site Little Ethiopia reported Thursday. The report said he was waiting to immigrate to Israel amid delays in the implementation of a government decision to bring 9,000 members of his community to the Jewish State.

Demonstrations on Thursday and similar protests in recent days in the city of Gondar occurred amid inter-ethnic tensions involving the Welkait community.

Gondar has approximately 6,000 people from the Falash Mura community of Ethiopians who claim links to descendants of Jews who converted to Christianity generations ago but now seek to return to Judaism and immigrate to Israel.

In April, an Israeli government signed off on an agreement guaranteeing the immigration of 9,000 Falash Mura by 2020, partly with funding from the International Christian Embassy Jerusalem. The agreement called for the absorption of 1,300 Falash Mura by June but, following delays, the first group of Ethiopian immigrants to move to Israel in the past three years is scheduled to arrive at Ben-Gurion airport on Sunday. Only 78 of them are to land in Israel on the evening of Oct. 9.

The article about Chekla’s death on Little Ethiopia, which is a semi-official website of lobby groups representing the interests of Ethiopian Israelis, accused the Israeli government of dragging its feet because of racism on the immigration of the Falash Mura.

“The Government of the State of Israel continues to classify Jews according to color and race and completely ignores the community in Ethiopia,” the unsigned article read. “Wherever White Jews are to be found, the government shows its attentiveness in every possible way, from sending delegates to calling for immediate aliyah,” the authors continued, using the Hebrew word for immigration to Israel under its Law of Return for people of Jewish descent and their relatives. “But it’s a different story in the case of the Beita Israel,” read the text, using the Amharic-language designation of the Falash Mura, which means “the House of Israel.”

But, pointing to the community’s achievement in Israel, Israeli officials and advocates of the policies applied to absorb approximately 120,000 Ethiopians into Israeli society since the 1980s have consistently rejected allegations of racism toward African Jews.

“Undeniably, mistakes were made in the absorption of aliyah from Ethiopia,” wrote Uri Heitner, a senior researcher at the Shamir Institute for Research – a state-funded research and development center and think tank located in the Golan Heights – wrote last week in an op-ed about Ethiopian Jews in Israel. “There are still difficulties demanding resolution. But overall, the Ethiopian Aliyah is an impressive Zionist success story.”

Ethiopian Jew Killed in Riots While Waiting To Leave for Israel