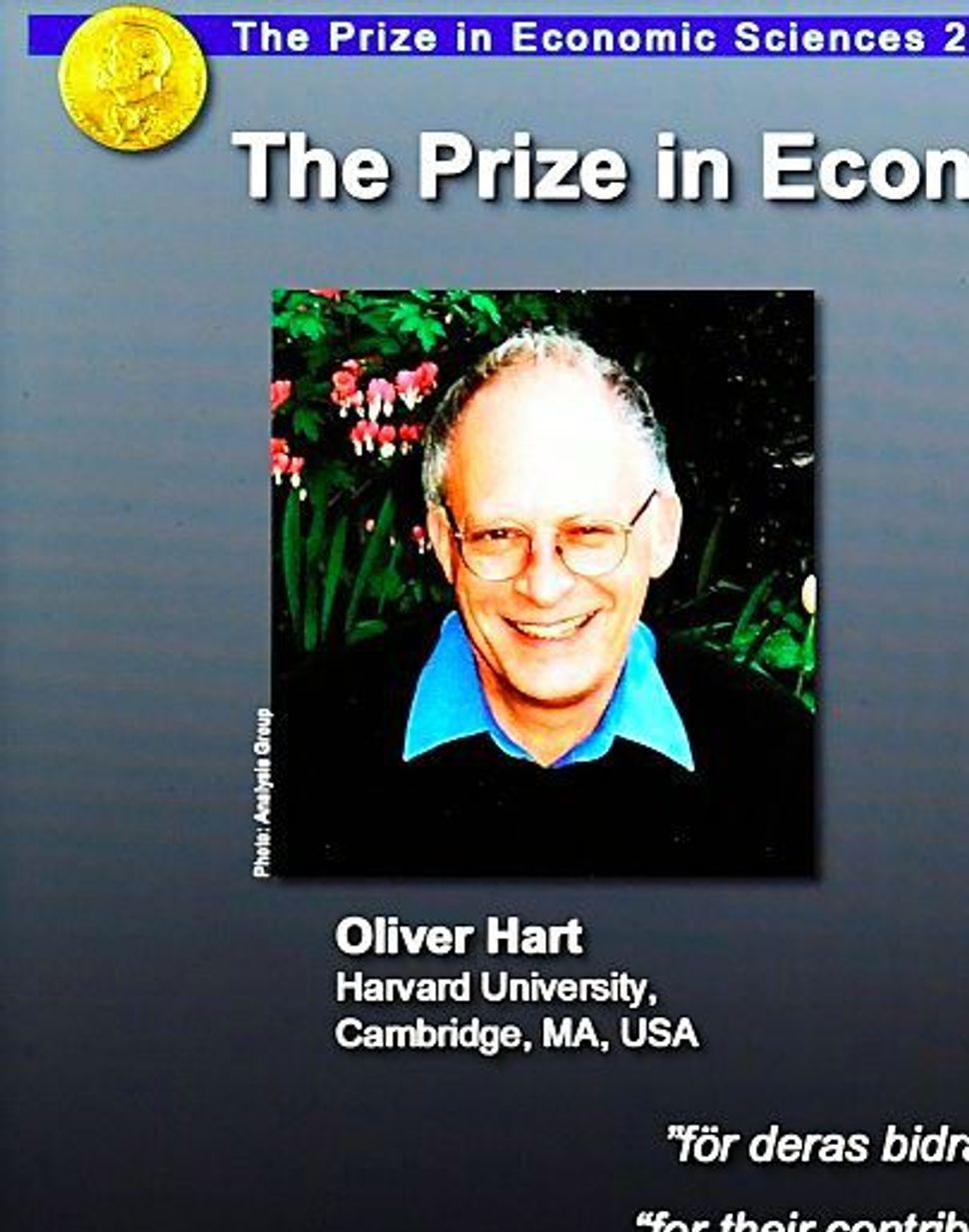 British-born Oliver Hart and Finland’s Bengt Holmstrom won the Nobel Economics Prize on Monday for work that addresses a host of questions from how best to reward executives to whether schools and prisons should be privately owned.

Their findings on contract theory have implications for corporate governance, bankruptcy legislation and political constitutions, among other fields, said the Royal Swedish Academy of Sciences, which announced the 8 million Swedish crown ($928,000) prize.

“This theory has really been incredibly important, not just for economics, but also for other social sciences,” said Per Stromberg, member of the prize committee and professor at the Stockholm School of Economics.

Contract theory considers, for example, whether managers should get paid bonuses or stock options, or whether teachers or healthcare workers should be paid fixed rates or by performance-based criteria.

Hart is economics professor at Harvard University while Holmstrom is professor of economics and management at the Massachusetts Institute of Technology.

In total, the nine academics who won Nobel prizes this year in medicine, physics, chemistry and economics included five born in Britain, a Frenchman, a Finn, a Dutchman and a Japanese.

While, none was American-born, six – including all five Britons – are based at U.S. universities.

“I woke at about 4:40 and was wondering whether it was getting too late for it to be this year, but then fortunately the phone rang,” Hart was quoted as saying on the official Twitter account of the Nobel Prize.

“My first action was to hug my wife, wake up my younger son.”

Hart, who was raised in Britain, is the son of medical researcher Philip D’Arcy Hart and his wife Ruth Meyer, a gynecologist.

Hart’s wife, Rita Goldberg, is a writer and literature professor. She is the daughter of Holocaust survivors who is perhaps best known for her memoir Motherland: Growing Up With the Holocaust

Hart’s work has focused in part on understanding which companies should merge and the right mix of financing, and when institutions such as schools, prisons and hospitals should be privately or publicly owned, the academy said in a statement.

He has argued that the incentives for cost reduction in privatized services, such as private prisons in the United States, are typically too strong.

Holmstrom has studied the setting of contracts for workers from teachers to corporate bosses, concluding that: “In industries with high risk, payment should … be relatively more biased towards a fixed salary, while in more stable environments it should be more biased towards a performance measure,” the academy said.

He had argued that teachers’ pay should not just be based on students’ test scores, but set in a way that would also reward the teaching of harder-to-measure skills such as creativity and independent thinking.

“The results of this multi-tasking model changed how economists think about optimal compensation schemes and job design,” the academy said.—Reuters