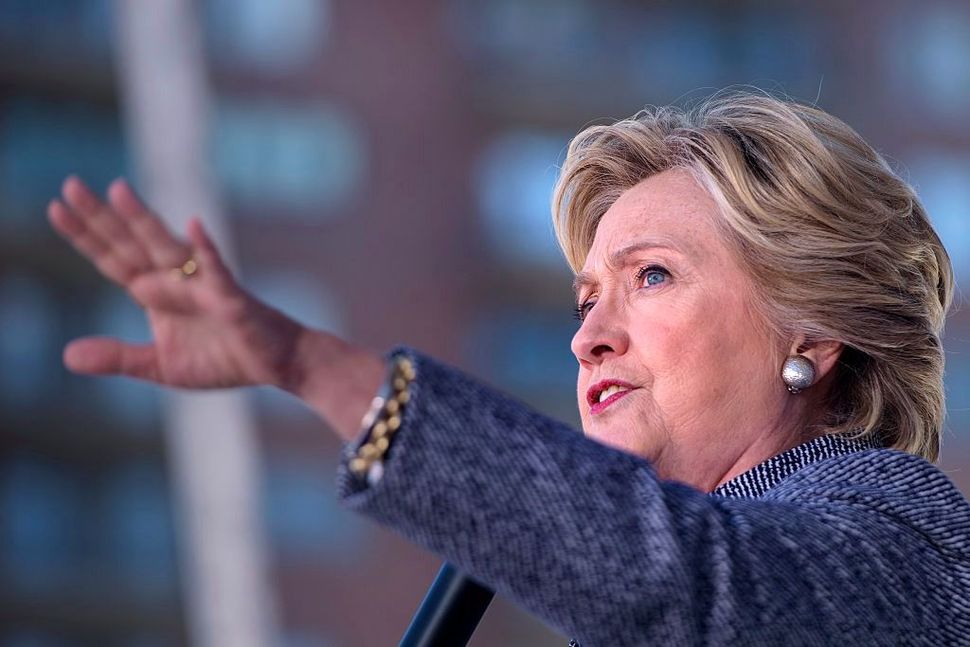 Democratic Presidential Candidate Hillary Clinton wrote to her senior advisors, a few days after the Israeli elections, that she believes that a “Potemkin” peace process between Israel and the Palestinians (meaning a peace process that was only for show) was better than no peace process at all, a Clinton campaign email posted on WikiLeaks shows.

On March 23, 2016 at 8:56 P.M. Clinton’s senior foreign policy advisor Jake Sullivan emailed Clinton and John Podesta, chairman of her presidential campaign. If Clinton is elected, Sullivan is likely to be appointed White House National Security Advisor. The email sent by Sullivan included a link to a New York Times article discussing Prime Minister Benjamin Netanyahu’s apology for his Election Day statement that “Arab voters are coming in droves to the ballot boxes.” By the link to the article, Sullivan wrote Clinton and Podesta “Unsurprisingly, Pragmatic Bibi makes an appearance.”

Seven minutes later Clinton responded positively to Netanyahu’s comments quoted in the article. She wrote that Netanyahu’s apology was “an opening that should be exploited,” and tied it to the promoting of the peace process between Israel and the Palestinians. “A Potemkin process is better than nothing,” and referred her advisors to another New York Times article published a few days earlier in which Netanyahu’s next moves as prime minister were described.

Many of the leaked Clinton campaign emails deal with Israel. Two leaked emails sent to Sullivan and Podesta included reports by Stuart E. Eizenstat, who served in senior positions in Bill Clinton’s administration and is considered close with the Clintons, about a meeting between him and Israeli Ambassador to the U.S. Ron Dermer.

In one message, sent on December 8, 2015, Eizenstat briefed campaign officials saying that Dermer told him that surprisingly Netanyahu had better relations with Clinton and that he believed that she would be easier to work with because she is instinctively more favorable toward Israel than the current administration. “Even during their famous 43 minute phone call [In March 2010 after the crisis brought on by the announcing of new settlement construction while Vice President Joe Biden was visiting Israel], when [Benjamin Netanyahu] felt like slamming down the phone, he felt she [Clinton, who was secretary of state at the time] was simply heavily scripted and reading from points prepared by the White House.”

Dermer told Eizenstat that he participated in some sessions of the Saban Forum that took place in Washington D.C. a few days before their talk. The annual event, which is associated with the Democratic Party, is organized by the Israeli-American businessman Haim Saban, considered Clinton’s biggest donor, together with the former U.S. special envoy to the peace process under President Barack Obama, Martin Indyk – the Brookings Institution’s vice president. Like Saban, Indyk is considered very close to the Clintons.

Eizenstat wrote that Dermer told him that he felt that the discussions at the Saban Forum stressed mostly the Palestinian issue, adding that he “wonders if a Clinton Administration ‘will be a Saban Forum for four years,’ due to ‘the people around her, but not her’,”

Eizenstat wrote the Democratic candidate’s advisors. He told Dermer that Clinton’s “own speech was ‘95% good, although there was some moral equivalence language.” In her address to the forum, Clinton said the alternative to Palestinian President Mahmoud Abbas “could be the black flag of ISIS.” Clinton said in her speech that the Palestinian leadership must stop inciting to violence against Israelis and the Israeli leadership must stop the building in the settlements and prevent violence against Palestinians.