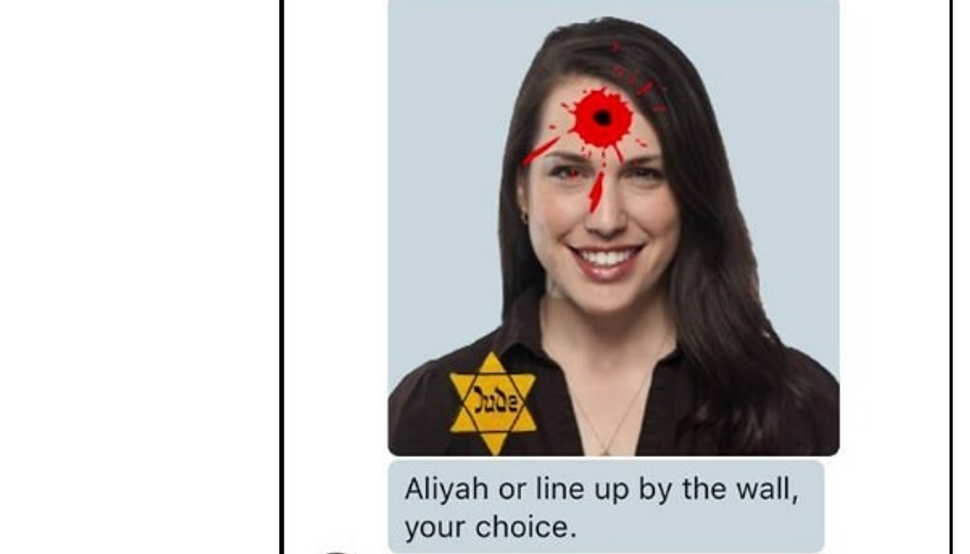 — A Jewish female reporter for the political news website Politico has been targeted with anti-Semitic messages from a Donald Trump supporter.

Hadas Gold is the editor of Politico’s “On The Media” blog. A photoshopped image of Gold was posted Monday on Twitter, including a bloody bullet hole in her forehead and a yellow star worn by Jews in Nazi Germany pinned to her chest. She also received emails with threatening and  anti-Semitic messages.

“Don’t mess with our boy Trump or you will be first in line for the camp,” read a message accompanying the photo. “Aliyah or line up by the wall, your choice.”

Aliyah is a Hebrew term for immigrating to Israel.

The Twitter account that sent the message has been suspended, according to Buzzfeed, which published a screenshot of the image.

“Politico notified Twitter of the threatening and vile tweets, and Twitter acted promptly to suspend the account. There were many more tweets and emails, some even more vile if that is imaginable. A police report is in the process of being filed,” said Politico in a statement.

Politico writer Julie Ioffe was previously targeted with anti-Semitic attacks on social media, following a critical profile written in May about Trump’s wife, Melania. Ioffe retweeted the attack on Gold and in response a Trump supporter tweeted an image of the reporter’s face inside an oven, a reference to the Nazi death camps.

Several Jewish reporters covering the 2016 campaign have been on the receiving end of anti-Semitic abuse on social media including CNN’s Jake Tapper, Jeffrey Goldberg of The Atlantic and Jonathan Weisman of The New York Times.

What does it say about this election that I’m so meh about really crazy anti Semitic attacks on me on social media and via email?