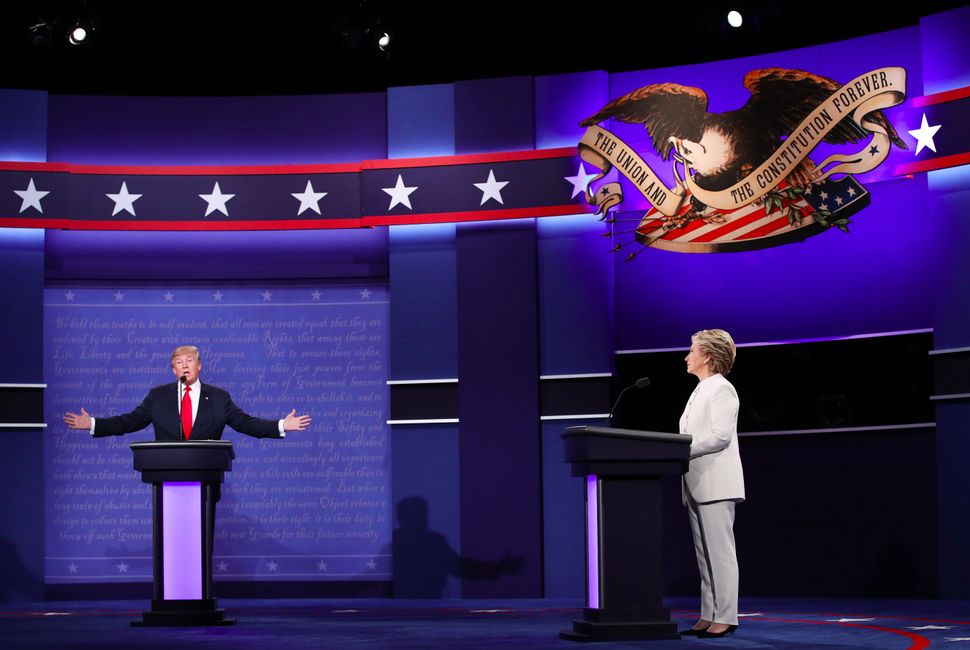 “Iran should write a letter to thank you, the stupidest deal of all time,” Trump said, his first of at least three mentions of last year’s deal between Iran and six major powers exchanging sanctions relief for a rollback in nuclear development.

Clinton, as secretary of state in President Barack Obama’s first term, helped set the stage for the deal by working on international sanctions.

“Iran is going to get nuclear weapons” because of the deal, Trump said.

Trump also said Clinton was responsible for persistent and devastating wars in Syria and Iraq.

Trump and his running mate, Indiana Gov. Mike Pence, have repeatedly used the Iran deal as an example of failure by Clinton and Obama. The debate, moderated by Fox News Channel’s Chris Wallace, started out substantively with Trump, the Republican nominee, and Clinton, a Democrat, drawing sharp distinctions on the direction of the Supreme Court and the economy.

Things took a nasty turn when Clinton hit Trump for what she depicted as his softness on Russian President Vladimir Putin, particularly because Trump will not accept the assessment of U.S. intelligence agencies that Russia is intervening in the elections by stealing and revealing Clinton campaign emails.

Trump said Putin did not “respect” Clinton, to which she countered, “That’s because he’d rather have a puppet as president of the United States.”

That infuriated Trump, who countered, “You’re the puppet!”

Trump, who is trailing in the polls, also refused to say whether he would accept the outcome of the election. “What I’m saying is that I will tell you at the time, I will keep you in suspense,” he said.

A nominee threatening not to respect the outcome of a U.S. presidential election is unprecedented.