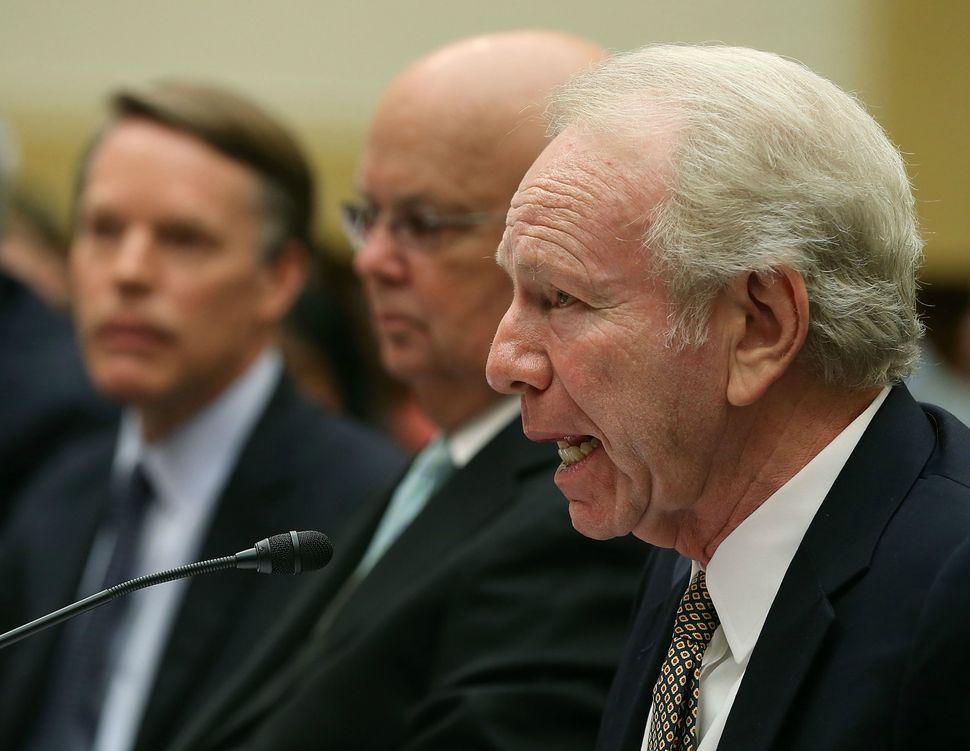 — Joe Lieberman is in South Florida doing the shul and seniors circuit for a Clinton, and he’s relishing the gig.

“How does it feel? It feels like I’m home again,” Lieberman said Thursday in a phone interview, his voice relaxing into a remarkable confession for the former senator from Connecticut who set fire to his bridges with his party in 2006 and torched them completely in 2008 when he endorsed the Republican presidential candidate.

“You know, I am a Democrat,” he said. “And it’s been uncomfortable for me to be off as an Independent.”

Lieberman’s appearances in South Florida on behalf of Hillary Clinton – and a video and robocall soon to be released targeting Jewish voters in the state – is a sign of how the Clinton nomination is reconciling anxious centrist Jews with a party perceived to have veered left during the Obama presidency.

“It’s a clear choice that she’s so much better for the future of the country” than Donald Trump, Lieberman said, noting her Republican rival.

Lieberman spoke to JTA having just completed a grueling day stumping for Clinton on the Jewish circuit in Palm Beach, Miami Dade and Broward counties.

For Democrats, it’s a replay of efforts in 2012 to push back against inroads that Republicans were making among Florida Jews, albeit with a different centrist Jewish hero to make the case for the candidate.

Then it was Ed Koch, the former New York mayor who had excoriated President Barack Obama’s first-term Israel policies. Koch appeared in a video e-blasted to Florida’s Jews on the eve of that election arguing that whatever disagreements he had with Obama on Israel, the president met the pro-Israel threshold and his re-election was preferable because of his pledge to preserve entitlements.

Koch died months after the election. Now, as in 2012, polling shows a tight race in Florida, and both sides are reaching out to Jews. This time, Democrats are bringing Lieberman to bat.

Jews for Progress, a pro-Clinton super PAC, is including Lieberman’s message on a robocall aimed at 100,000 Jewish homes in the state and a video also aimed at reaching 100,000 Florida Jews through email and social media.

Lieberman made history in 2000 when he became the first Jewish candidate to place on a national party ticket: Democratic presidential nominee Al Gore named him his running mate.

That – and his Orthodoxy — means he scores high name recognition among Jewish voters of a certain age, and that age is prevalent on the circuit he worked Thursday, including the Century Village retirement community in West Palm Beach and The Shul, a Chabad-Lubavitch synagogue in Surfside, in Miami-Dade County, among other stops.

Lieberman said he encountered skepticism during his rounds, some of it “silly,” some of it substantive. In the former category, Lieberman said Jewish voters were still wondering about Clinton’s embrace with Suha Arafat in 1999, after the Palestinian leader’s wife delivered a speech in Arabic accusing Israel of poisoning Palestinian girls. (Clinton claims she did not pick up on the accusation when she listened to the speech through an interpreter.)

“I explained, in the Arab world, [embraces] are like shaking hands,” he said.

More substantive, Lieberman said, was Clinton’s support for the Iran nuclear deal reached last year. It was evident that criticism was harder to deflect, as Lieberman took a lead role in opposing the deal, which traded sanctions relief for a partial rollback in Iran’s nuclear development.

Recounting the arguments he pitched to skeptics, Lieberman cast Clinton as the “bad cop” before and after the deal was made: She shaped tough sanctions by joining initiatives Lieberman helped lead in the Senate and then as secretary of state in Obama’s first term, and seeks to enforce the deal in the post-Obama era.

“I was disappointed in her support of the agreement,” Lieberman said, but added: “She helped build the climate of economic stress in Iran that brought the Iranians to the table. The Obama administration then basically made a bad deal and didn’t get from the Iranians what he could have gotten, which was really an end to their nuclear program.

“Now that’s a fact, so I say: Before the agreement, she was very strong on the sanctions, after the agreement she’s been clear she’s going to monitor Iran’s compliance with the agreement, and if they don’t comply she’s not only going to lodge complaints, but if necessary she’ll be prepared to use American military force to stop development of a nuclear weapon by Iran.”

Lieberman’s argument is a blunter version of the subtle straddle Clinton has attempted when it comes to Israel and, more broadly, engagement in the Middle East. She wants to tamp down tensions with Israel’s government, but does not want to suggest Obama stoked them. She wants a more robust U.S. posture vis-a-vis Syria and Iran, but does not want to suggest that Obama has not been robust.

It is precisely Clinton’s advocacy for a more potent U.S. profile overseas that underscores Lieberman’s distaste for Trump, although, the consummate bridge builder, he prefers throughout the interview to build up Clinton and not attack the Republican nominee.

Lieberman outlined Clinton’s pro-Israel record throughout her Senate career and then as secretary of state.

“You compare that to Donald Trump, who because he hasn’t been in public service he doesn’t have that kind of record, you couldn’t say with the same confidence what she will do when she is president with regard to the U.S.-Israel relationship,” he said.

A few sentences later, he was tougher on Trump, and registered the concerns that have preoccupied some conservative Jewish Republicans who have abandoned Trump because of his isolationist tendencies.

“She’s so much better prepared for the Middle East alone to be the next president as compared to Donald Trump, who has no record in this regard and who sometimes seems to be suggesting that we pull back from a lot of parts of the world, including the Middle East, which would be terrible for Israel,” he said.

Lieberman returned to how “at home” it felt to be working with the Clintons, remembering her husband, former President Bill Clinton, a fellow Yalee: stumping for him in the 1970s, when Lieberman first ran for the state Senate in Connecticut, and then his endorsement in 1992, one of the first by a Northern senator.

“I was very proud that I did” endorse Clinton, said Lieberman. “I thought he was an exceptional president.”

Lieberman made history in 1998 when he became the first Democrat on the Senate floor to denounce Clinton’s affair with Monica Lewinsky. That foreshadowed a slow, painful rupture with the party, accelerated by Lieberman’s backing of President George W. Bush’s Iraq War, which led to Lieberman losing the 2006 Democratic primary for U.S. Senate. He went on to win as an Independent and then quit politics in 2012, but not before endorsing his old friend Sen. John McCain, R-Ariz., in the 2008 presidential election. That move seemed to be a permanent breach with a party whose left wing he had identified with as a youth. (Bill Clinton backed Lieberman “against the establishment” in the 1970s, Lieberman fondly recalled.)

Or not so permanent a rupture. Despite the “unhappy” Lewinsky episode, Lieberman said, Bill Clinton was ecstatic when Gore named him his running mate, and stumped for him during the 2006 primary.

And now he’s returning the favor.

“There are still some persuadables in the general community and the Jewish community,” Lieberman said. “I think this community is moving in the direction of Hillary Clinton and I’m glad to be here to make the case.”