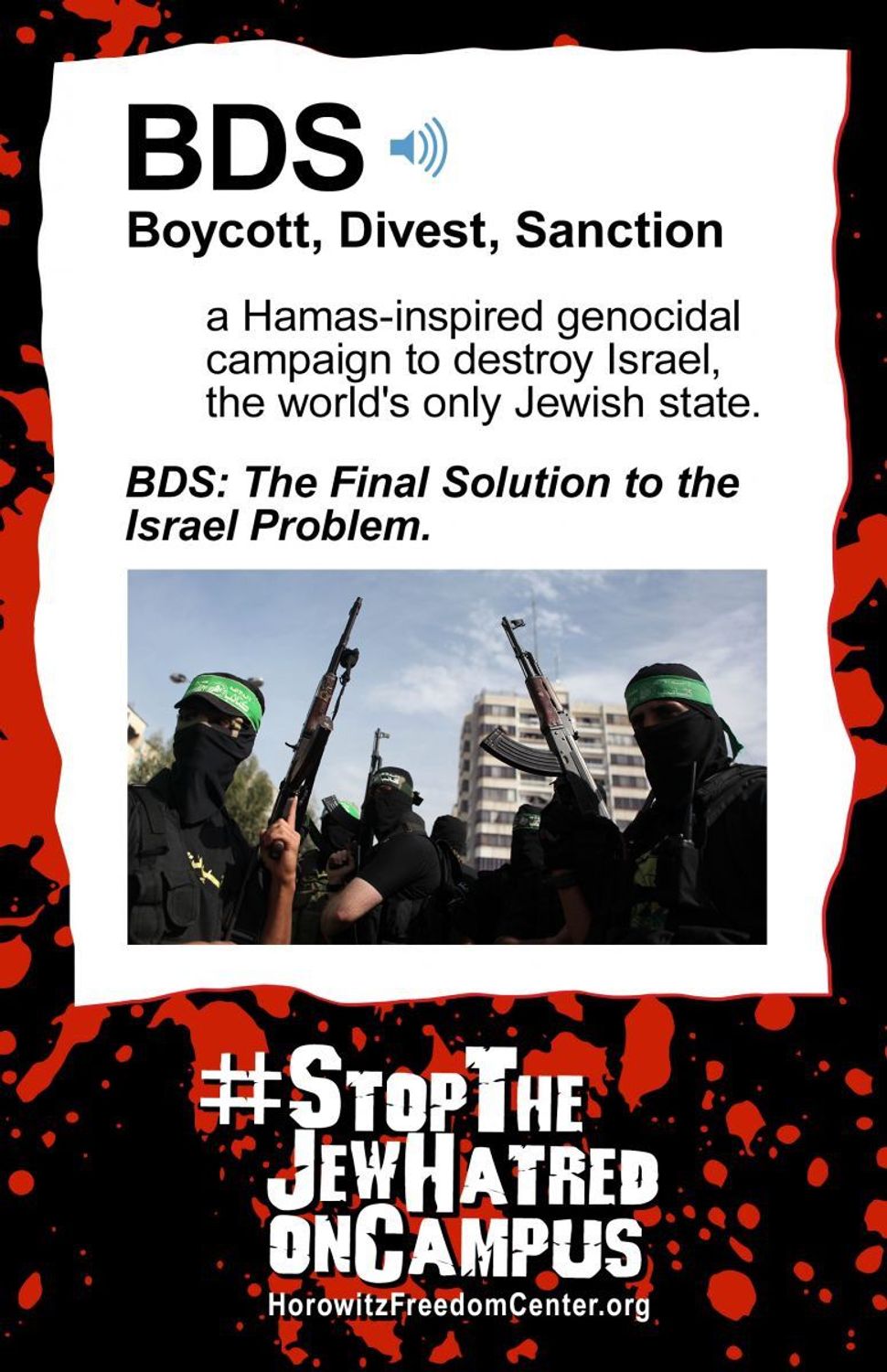 A row over Israel on campus is as predictable as the fall of autumn leaves, and it’s no different this season. Fliers accusing pro-Palestinian students of being anti-Semitic have cropped at numerous colleges in October — including the University of Chicago, Tufts University, Brooklyn College and Berkeley — and have been claimed by the David Horowitz Freedom Center, a rightwing organization labeled a hate group by the Southern Poverty Law Center.

“Do you want to show your support for Hamas terrorists whose stated goal whose stated goal is the elimination of the Jewish people and the Jewish state? Join us! Students for Justice in Palestine at Tufts University.” read one flier procured by the Tufts Daily. It also featured a Palestinian militant wrapped in a keffiyeh, or traditional headscarf and toting a machine gun.

Other posters included specific callouts to individual faculty and students, accusing them of collaboration with jihadists. According to the anti-Zionist site Electronic Intifada, a flier at San Francisco State University labeled one professor “a leader of the Hamas BDS campaign,” while one at Berkeley said that a professor was a “supporter of Hamas terrorists” and an “Islamophobia alarmist.”

Most of the posters featured the slogan #Jewhatred and directed people to the Freedom Center’s Web site. Horowitz’s organization has been termed a hate group by the Southern Poverty Law Center, which has described Horowitz as “a driving force of the anti-Muslim, anti-immigrant, and anti-black movements.”

According to Electronic Intifada, the current poster campaign was preceded by a smaller episode last spring at the University of California–Los Angeles, where the group circulated similar fliers.

Critics of the posters — both campus administrators and others — have said they create an atmosphere of fear.

“This is not an issue of free speech; this is bullying behavior that is unacceptable and will not be tolerated on our campus,” Leslie Wong, the president of San Francisco State, said in a comment run by Electronic Intifada.

Joanne Barker, a professor at the university, told the Web site that her school “should be contacting federal and state authorities to investigate this incident as a hate crime.”

Recently, some rightwing Israel advocates have adopted more hard-nosed tactics intended to publicly shame and sanction their perceived enemies. Created last year, one such effort, the Canary Mission, has compiled dossiers on hundreds of students and faculty that it sees as anti-Israel or anti-Semitic – often conflating the two. Another new organization, the Amcha Initiative, has an “anti-Semitism tracker” on its Web site that puts calls for boycotts, divestment, and sanctions against the Jewish state (BDS) in the same category as Jew-hatred.

This also comes on the heels of a controversy at Berkeley, where students and faculty clashed with one another over a course that presented Zionism as a “settler colonialist” movement.