Burial Slab of Jesus Uncovered for First Time in Centuries 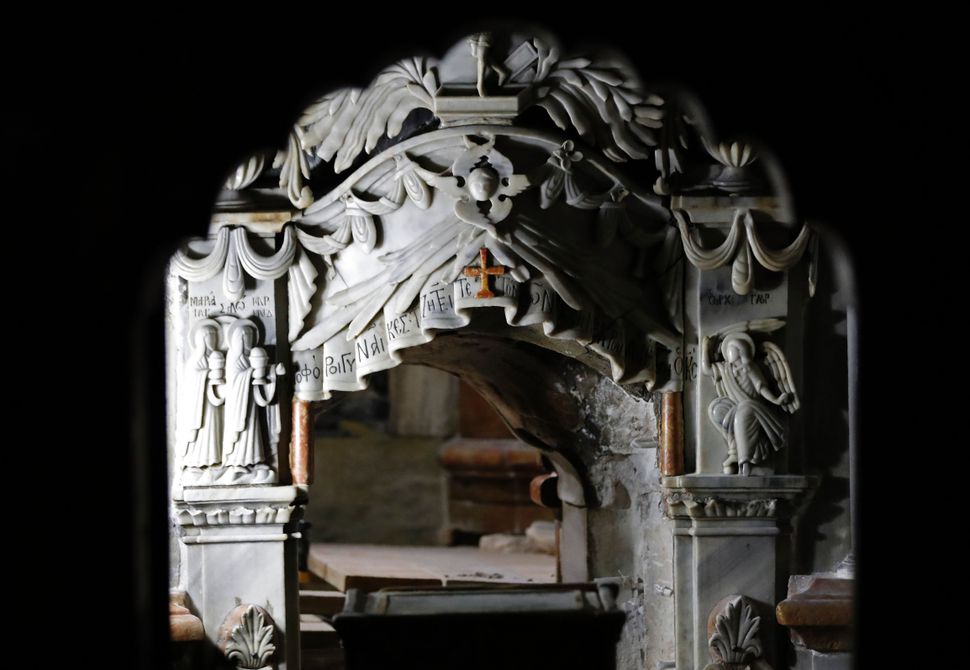 — Researchers recently uncovered in Jerusalem a stone burial slab that many believe Jesus Christ’s body may have been laid on following his death.

The original surface of the tomb was uncovered in the Church of the Holy Sepulcher in the Old City during restoration work and has been covered by marble cladding since at least 1555 A.D., National Geographic reported Wednesday.

The marble cover was pulled back, and researchers were surprised by the amount of fill material beneath the covering, Fredrik Hiebert, an archaeologist in residence at the National Geographic Society, and a researcher on the restoration project, told National Geographic.

“It will be a long scientific analysis, but we will finally be able to see the original rock surface on which, according to tradition, the body of Christ was laid,” Hiebert told National Geographic.

National Geographic is filming the restoration process for the “Explorer” series, which will air in November.

According to the Bible, the body of Jesus Christ was laid on a burial bed, or slab of limestone, following his crucifixion.

Christians believe that Christ was resurrected following his death, and women who came to anoint his body three days after the burial reported that Jesus’ remains had vanished.

The find was announced amid an international controversy over the passing of two resolutions this month by UNESCO, the world heritage and educational arm of the United Nations, that refers to the Temple Mount and the Western Wall only by their Arabic names.

Israel sharply condemned the passing of the votes, submitted by Arab countries at the request of the Palestinians, as an attempt to erase Jewish ties to Jerusalem. Some Christian groups said this, in turn, also means the erasure of Christian history in Jerusalem.

The Church of the Holy Sepulcher was built by the emperor Constantine in  325 A.D., and has long been considered by Christians to be the spot where Jesus Christ was buried, The Associated Press reported.

In June, a team of experts began renovations on the church and the Edicule, or ancient chamber, that held Jesus’ tomb, AP reported.

The exposure of the burial bed will allow researchers to answer questions about the original form of the tomb, Antonia Moropoulou of the National Technical University of Athens told National Geographic.

“We are at the critical moment for rehabilitating the Edicule,” said Moropoulou, who is supervising the restoration. “The techniques we’re using to document this unique monument will enable the world to study our findings as if they themselves were in the tomb of Christ.”

Burial Slab of Jesus Uncovered for First Time in Centuries