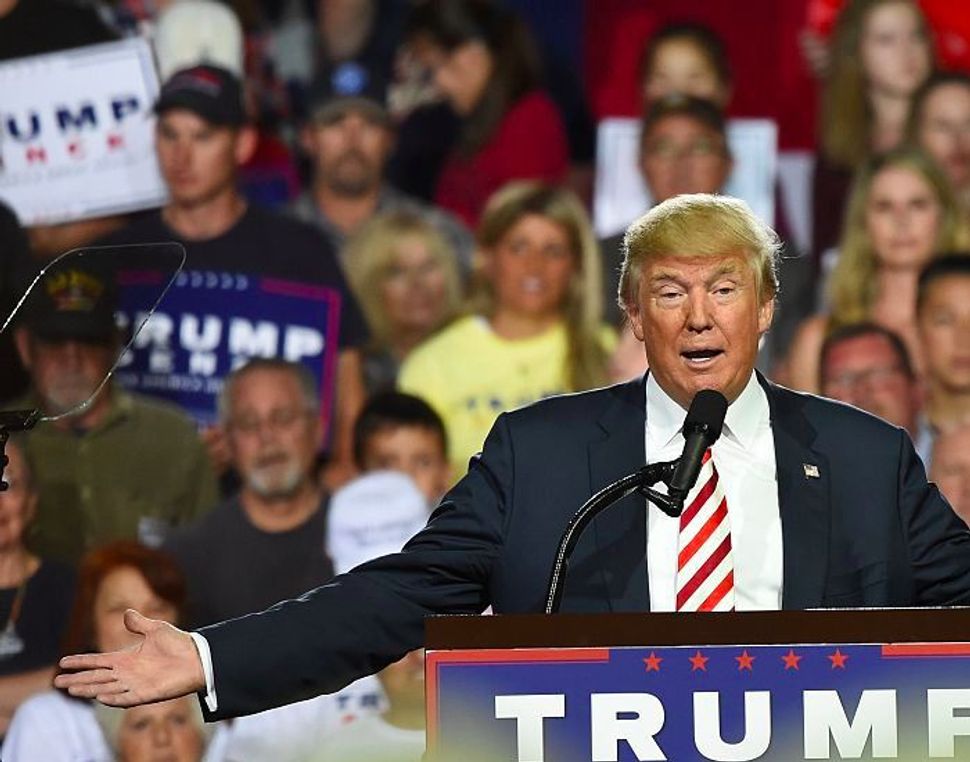 WASHINGTON — Less than a week before the presidential election, Donald Trump’s two top Israel advisers released a detailed plan that pledges assistance to Israel beyond current levels but stops short of pledging to kill the Iran nuclear deal.

The 16-point plan, which was posted Wednesday on the Medium publishing platform by David Friedman and Jason Dov Greenblatt, reflects stated pledges by Trump. In some cases, however, the proposal goes beyond them – most notably on defense aid above current levels.

It comes in the final frantic days of an election in which Orthodox Jewish votes may be critical in Ohio and Florida, and where anecdotal evidence suggests that charges of sexual assault against Trump have diminished support for him among that naturally Republican constituency. Both campaigns have targeted Jewish voters in battleground states, with a special focus on Orthodox communities, which tend to be more hawkish on Israel.

The plan also was revealed as the Trump campaign is fundraising in a final push to defeat the Democratic nominee, Hillary Clinton. The Republic nominee has been unable to generate enthusiasm among his party’s Jewish givers, in part because of his past equivocations on Israel, but also because of his broadsides against women, Hispanics and Muslims, as well as the support he has garnered from openly anti-Semitic elements on the alt-right.

The introduction to the statement by Greenblatt and Friedman – also delivered to reporters’ inboxes by Greenblatt — does not make clear whether Trump has blessed the plan. It says instead that “each of these positions have been discussed with Mr. Trump and the Trump campaign, and most have been stated, in one form or another, by Mr. Trump in various interviews or speeches given by him or on his social media accounts.”

That “most” and the lack of a direct statement attributing the postures to Trump amount to an important caveat in a campaign in which Trump has repeatedly disavowed statements by close advisers, and has cautioned reporters and the public to heed only direct quotes from him, in his speeches and on social media.

The Trump campaign did not reply to a JTA request for comment.

The statement calls the memorandum of understanding reached over the summer between the Obama and Netanyahu governments to funnel to Israel $38 billion in defense assistance over 10 years “a good first step,” but adds that the agreement “will not limit the support that we give. Further, Congress will not be limited to give support greater than that provided by the MOU if it chooses to do so.”

A side letter to the agreement bans Israel from accepting additional funds until 2019, even if Congress mandates such funds.

In March, Trump flirted with cutting funding for assistance to Israel, and in his speech the same day to the American Israel Public Affairs Committee omitted a commitment to defense assistance, which is standard fare in such speeches. But in September, after meeting with Prime Minister Benjamin Netanyahu, the candidate issued a statement calling defense assistance an “investment.”

The Friedman-Greenblatt statement also offers reassurances where Trump had equivocated previously, settling on a traditional Republican pro-Israel outlook: It says a Trump administration will recognize Jerusalem as Israel’s capital, and also values “our close friendship and alliance with Israel — culturally, religiously, and politically.”

Last year, Trump said he would be neutral in Israeli-Palestinian peacemaking and would not commit to recognizing Jerusalem as Israel’s capital. Over the course of the campaign, however, he has walked back those postures without explicitly saying he had changed his mind.

Trump has repeatedly blasted last year’s deal between Iran and six major powers, led by the United States, exchanging sanctions relief for a rollback in Iran’s nuclear program. He has called the agreement “the worst” he has ever seen and said it will lead to Iran becoming a nuclear power. The real estate magnate and television reality star even once suggested that Israel was doomed if he is not elected president. (Clinton is skeptical of aspects of the deal, but has pledged to uphold it.)

What Trump has not done, though, is to join a majority of Republican lawmakers – including among candidates in the primaries – in pledging to kill the deal. Notably, neither does the statement by Friedman and Greenblatt, instead suggesting that a Trump administration would address alleged Iranian violations within the parameters of the deal.

“The U.S. must counteract Iran’s ongoing violations of the Joint Comprehensive Plan of Action regarding Iran’s quest for nuclear weapons and their noncompliance with past and present sanctions, as well as the agreements they signed, and implement tough, new sanctions when needed to protect the world and Iran’s neighbors from its continuing nuclear and non-nuclear threats,” it says.

The statement also hews to the Republican platform approved this summer in retreating from over a decade of a commitment by both major American parties to a two-state solution to the Israeli-Palestinian conflict.

“The U.S. cannot support the creation of a new state where terrorism is financially incentivized, terrorists are celebrated by political parties and government institutions, and the corrupt diversion of foreign aid is rampant,” it says.

In another departure from Obama administration policies, the statement says it would extend the battle against the Boycott, Divestment and Sanctions movement to those who target “persons or entities doing business in Israeli areas,” an apparent reference to the West Bank and Golan Heights. The Obama administration requires non-cooperation with entities that participate in BDS, but explicitly exempts entities – among them, the European Union – that restrict such targeting to the settlements.

An additional pledge in the document is to “ask the Justice Department to investigate coordinated attempts on college campuses to intimidate students who support Israel.”