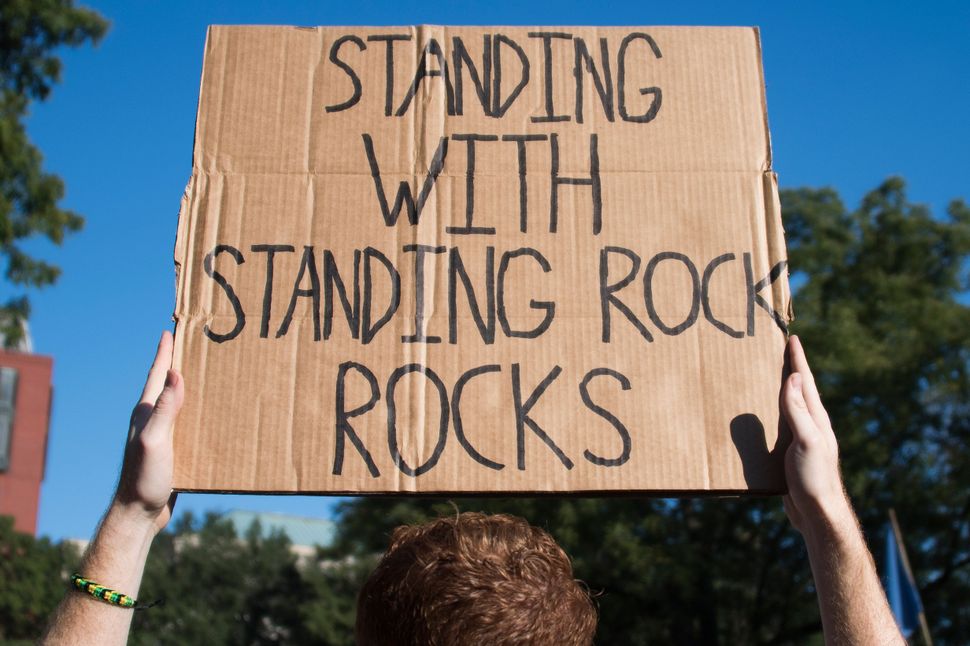 — Several Jewish groups have voiced their support for the Native American-led protest of an oil pipeline that would run near the Standing Rock Indian Reservation in North Dakota and South Dakota, with some rabbis traveling to the protest in solidarity.

Other rabbis have been arrested in local demonstrations supporting the protest.

“The movement for Indigenous sovereignty in this country is centuries old, and seen wherever in the world colonizing nations believe they have the right to take over communities and land, disregarding culture, customs, religion, and laws,” Reconstructionist Rabbi Linda Holtzman said in a statement. “It is our obligation to stand with the Indigenous people of Standing Rock.”

The Central Conference of American Rabbis, a Reform organization, also declared support for the protests. The protesters say the pipeline poses risks to Standing Rock’s water supply and could also violate a Native American burial ground.

“Reform rabbis have called for climate justice repeatedly over the decades, most recently in 2015, and have long supported the rights of Native American Indians and particularly expressed sensitivity for their burial sites,” said the CCAR statement published Monday.

Another statement signed by 200 rabbis across the denominational spectrum was published Thursday.

“The pipeline is desecrating their graves, threatening to poison the water of the Missouri River, and endangering the entire web of life of Mother Earth by increasing the burning of fossil fuels,” the statement said.

T’ruah also issued a statement supporting the protests, and drew a connection between the threat to the burial grounds and desecration of Jewish cemeteries.

“We are also deeply dismayed at the grave threat to Sioux burial grounds and holy sites caused by the proposed path of the pipeline,” the statement said. “Throughout Jewish history our cemeteries have been desecrated and destroyed. Jews cannot stand idly by while the Sioux community’s burial grounds are threatened by the planned route of the pipeline.”

In Philadelphia, nine rabbis organized by the pro-Palestinian group Jewish Voice for Peace were arrested Wednesday as part of a demonstration supporting the Standing Rock protest. JVP has also compiled a set of rituals that communities can perform in support of the protest.