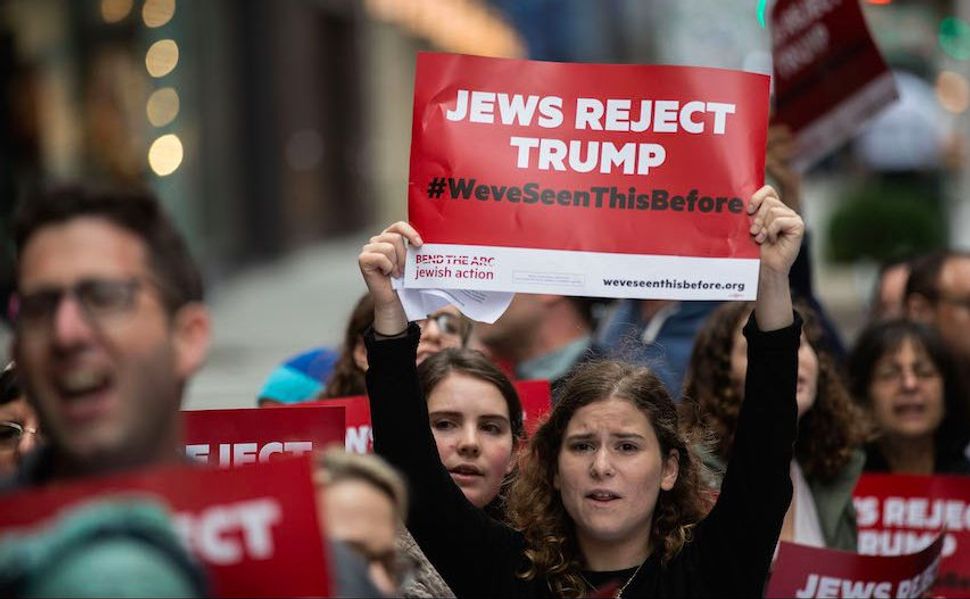 (JTA) — Jewish Americans have never been ones to sit out an election, whether it comes to voting, political fundraising or dinner table punditry. But even for a community grown used to the political fray, the 2016 campaign was different.

The stakes are so high, the differences so stark, the language so overwrought that Trump vs. Clinton seems to overwhelm everything else.

But there is also a specific Jewish component to this election that some voters are sensing, one that has them reassessing their view of what it is to be Jewish in America.

Rabbi Daniel Bogard, 33, of Cincinnati, said he had never personally encountered anti-Semitism until this election cycle. He has now been called a Christ killer twice on social media – once each from the right and the left, when he was defending Israel.

“There’s been permission that’s been given to say these things we didn’t used to say,” said Bogard, who with his wife, Rabbi Karen Kriger Bogard, was installed recently as an associate rabbi at Adath Israel, a Conservative synagogue.

That has led him to radically alter a view he once held that the established Jewish community was too quick to charge others with anti-Semitism.

“As a rabbi, until a year ago, I would have told you anti-Semitism was absent, it’s been a bludgeon used by institutional Jewish world, we’re too quick to cry wolf, too quick to use it to form identity in our youth,” he said. “I would have said all those things. And now that I have come up against it, it has shaken my understanding.”

Donald Trump, the Republican nominee who has made broadsides against Muslims, Hispanics and other minorities a part of his campaign — recklessly, say his critics; unintentionally, say his defenders — has drawn into the light racists and anti-Semites who once occupied the margins of American life.

In turn, that has coaxed out of the closet an otherness that some Jews, especially millennials, had never sensed or thought they would experience.

The Anti-Defamation League has warned about anti-Semitic imagery among Trump’s followers throughout the campaign, and implored the candidate to renounce the purveyors, with occasional success. Over the last couple of days, the Trump campaign released a closing television ad about an “international global power structure” that the ADL and other Jewish groups said trafficked in classic anti-Semitic themes.

Jordana Merran, 28, a foreign policy consultant in Washington, D.C., said she had been blithe about warnings from her parents’ generation that Jews could again face the privations of what seemed a distant past.

Merran is a constant presence on social media. Once she reflexively “liked” profile photos of Jewish friends because they conveyed warmth and happiness. Now, some of the same photos have been photoshopped into gas chambers and ovens — a recurring internet meme among far right anti-Semites who declare themselves supporters of Trump — and she is sickened.

“We are still a minority in this country, and that position of comfort and being at home can’t be taken for granted,” she said. “Seeing that vitriol against Jews is so shocking and disheartening. It makes you wonder, ‘Are we lucky today? What does the future hold?’”

What the future holds is not a theoretical question to some voters raised on stories of their parents or grandparents fleeing persecution.

“My sister and her son didn’t have passports, but I pushed her to get them this summer,” said Suzanne Reisman, 40, a New York City-based writer who has been harassed by anti-Semites on Twitter. “My grandparents were Holocaust survivors. I hope it won’t come to it, but if we have to flee, we are ready.”

To be sure, there are plenty of Jews who say this election is not unlike others. Maxim Smyrnyi, responding to a call put out on social media by a JTA reporter asking for comment on how the election had changed people, compared the rise of Trump to the Rev. Jeremiah Wright, the Chicago preacher who once counted President Barack Obama as a congregant. Wright was a fierce critic of Israel who once blamed “them Jews” for driving wedge between him and Obama.

“If Jews survived an actual president whose pastor of 20 years was an anti-Semite, Jeremiah Wright, they can soldier through whoever gets elected this time,” Smyrnyi said on Facebook.

Obama renounced Wright after his anti-Israel statements emerged; Wright’s anti-Semitism was manifested in comments he made after Obama snubbed him.

But there are also Jewish pundits on the political right who are worrying about the darker forces being unleashed by Trump’s intentional or collateral appeal to anti-Semites.

Jews should not “ignore the rekindling of right-wing anti-Semitism simply because its next-of-kin — left-wing anti-Zionism — remains so potent on college campuses and in progressive political circles,” wrote Bret Stephens, the Pulitzer Prize-winning columnist for The Wall Street Journal and a critic of Trump. “The GOP’s conversion to being a powerfully pro-Israel and philo-Semitic party is a relatively recent development. No law dictates that it is destined to be a lasting one.”

For its part, the Trump campaign insists that the campaign is neither anti-Semitic nor trying to appeal to the racist far right, as a top aide said Sunday in response to ADL’s criticism of the “global power structure” ad.

“Mr. Trump’s message and all of the behavior that I have witnessed over the two decades that I have known him have consistently been pro-Jewish and pro-Israel and accusations otherwise are completely off-base,” Jason Greenblatt, the top attorney for the Trump Organization and the co-chair of the campaign’s Israel advisory committee said in a statement Sunday to CBS News. “The suggestion that the ad is anything else is completely false and uncalled for.”

Others note that Trump’s daughter Ivanka and her husband, the real estate developer and key Trump adviser Jared Kushner, are Orthodox Jews.

“My father-in-law is not an anti-Semite,” Kushner wrote earlier this year. “[T]he worst that his detractors can fairly say about him is that he has been careless in retweeting imagery that can be interpreted as offensive.”

But for others, the election has radically transformed how they see themselves in the American landscape.

“I previously did not think of my Jewishness as a race,” said a 39-year-old woman from the Washington metropolitan area who asked not to be identified because her employer requires her not to be political.

“I didn’t like the ‘race’ characterization for two reasons: one, it smacked of the sort of caliper measuring and feature evaluation that Hitler and the Nazis favored during WWII, and two, I generally feel like race is a social construct that we humans have devised to make it easier to put people into categories and thus order our world,” she said. “But this election has changed that for me. I feel more ‘other’ than I have in the past. I have lain awake at night and considered the fate that befell my grandmother’s brothers and others of my relatives who died in the Holocaust, wondering what it felt like, how soon they realized they were doomed.”

Now this woman is trying to persuade her spouse to move to Israel with their 5-year-old daughter if Trump is elected – an option she had never seriously contemplated.

“I’m not under the impression that we’d get carted off to a camp on Jan. 21,” Inauguration Day, she said. “I think it would be a slow process; we don’t have to make a decision on Nov. 9 lest we be unable to make one later.”

Israel factors into the post-Trump calculus in different ways. Merran, the foreign policy adviser, says that Jewish acquaintances who insist on supporting Trump because he will be “better for Israel” have brought into question her allegiance to the pro-Israel community.

“When I see people in my community say we need to vote a certain way because the interests of the Jewish state are on the line, it makes me question whether we have our priorities in order,” she said.

Some older Jews said they recognized the patterns from events they had seen fresh in their youths.

The tell for Norman Gelman, 87, a retired consultant on public policy who lives in Potomac, Maryland, was that “white supremacists and neo-Nazis quickly recognized [Trump] as their champion. His demeanor and his narcissism quickly reminded me of Mussolini.”

William Berkson, 72, a writer who lives in Reston, Virginia, said that if anything, Trump posed a greater danger than earlier demagogues because he had as a tool the instant delivery guaranteed by social media.

“Today, leaders can have even more of a catalytic effect on followers because of the magnifying power of social approval,” Berkson said. “When a leader says something is OK, millions of followers can reinforce one another with the same message on social media.”

Micah Nathan, 43, a writer who lives in Newton, Massachusetts, said Trump was shocking only because he was saying plainly what Republicans had been insinuating through code for years on topics like immigration, the Muslim community and the threat from globalization.

“Trump didn’t create his base. He gave them a unified voice, minus the softening rules of public discourse,” Nathan said.

In the swing state of Ohio, where both nominees have campaigned in recent days, Bogard said the buzz starts as soon as services end.

Like the mother in Washington who lays awake at night, Bogard finds his eyes shooting open in the middle of the night, “in a cold sweat because of the election.”