Keffiyehs and Controversy as Yasser Arafat Museum Opens in Ramallah 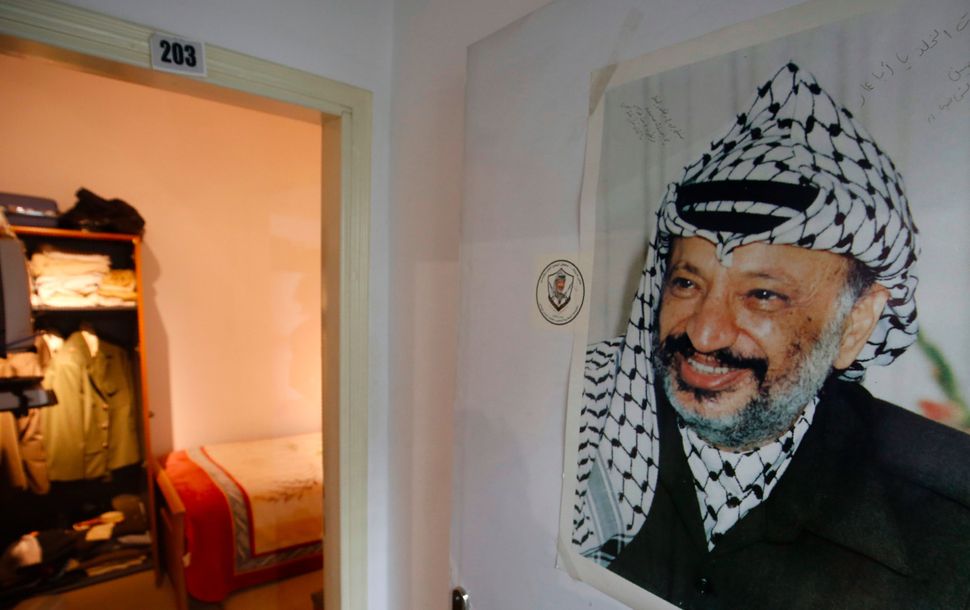 The battle for Palestinian statehood consumed Yasser Arafat’s life and a new museum in his name puts the nature of that fight front and center – the sub-machine gun on his desk, the AK-47 assault rifle in the corner, the pistol at his side.

Twelve years after his death in Paris at the age of 75, the Yasser Arafat Museum opened its doors in Ramallah on Thursday, attempting to flesh out some of the facts behind a divisive figure who remains something of an enigma long after his demise.

Arranged along four corridors over two floors, the museum takes visitors through a potted history of the Palestinian liberation movement: the exile in Tunisia and Lebanon, the return to the West Bank, the shared Nobel Peace Prize in 1994, and the violent first and second uprisings against Israel.

The corridors lead to the inner sanctum of Arafat’s besieged life in the Muqata, the Palestinian headquarters in Ramallah, where he was holed up for nearly three years in a pokey bedroom. Arafat’s body is now buried in the Muqata compound.

While revered by many Palestinians, Arafat was a thorn in the side of several Arab states and a ruthless killer in the eyes of Israelis. The museum largely lauds his legacy, while spending little time on those who stood by and with him, including his wife, Suha, and his successor, Mahmoud Abbas.

Hanging in the simple wardrobe next to the single bed in his hideout are his khaki military jackets and a pile of black-and-white keffiyehs, the checkered scarves he nearly always wore and which remain a symbol of resistance for Palestinians.

On the desk in his office, a pile of papers held down by a submachine gun, a copy of the Koran, and in a guards’ room an AK-47 leaning against the wall. In a separate display case, the ornate revolver he often wore in a holster on his hip.

The museum begins at the start of the 20th century and charts the rise of Palestinian nationalism, the struggle for international recognition, the confrontation with Zionism and with Israel after the state’s founding in 1948.

Archival photos and videos mark high and low points: handshakes with then-U.S. President Bill Clinton and Israeli Prime Minister Ehud Barak; bulldozers knocking down parts of the Muqata, which Arafat barely left during an Israeli siege from 2002-2004; a landmark 1974 address to the U.N. General Assembly.

Palestinian attacks, including the killing of Israeli athletes at the 1972 Munich Olympics, the hijacking of airplanes throughout the 1970s and deadly suicide bombings during the second intifada (uprising), are covered in a purely factual way.

Yet while lots of background and history are provided, several elements of Arafat’s life remain a conundrum. The museum relates that Arafat was born in the Old City of Jerusalem on Aug. 4, 1929, and was later taken to Cairo.

But historians say the evidence suggests he was born in Cairo and brought to Jerusalem at the age of four, when his mother died. Others believe he was born in Gaza, the Palestinian territory on the Mediterranean coast.

And his death, too, remains somewhat mysterious. French doctors say he died of a haemorrhagic stroke on Nov. 11, 2004, around two weeks after coming down with flu-like symptoms. He was flown to France in a military jet after Egyptian and Jordanian doctors failed to identify the health problem.

But Arafat’s wife always maintained he was poisoned with a something similar to Polonium and the museum gives that as the explanation for his death, saying it was carried out by Israel. Israel has denied any involvement.

Since his death, Palestinian affairs have fallen into further disarray. Deep splits have emerged between Fatah, the party of Arafat and Abbas, and the Islamist movement Hamas that rules Gaza. That has made efforts at Palestinian unity and statehood via negotiation with Israel more complicated.

Yet visitors said they draw hope from Arafat’s legacy.

“When I got to the place where he was besieged I felt how much injustice he had lived through,” said Bayan Mohammad, 28.

“I am sure everyone would like to visit the museum and will bring along their children to see how their leader had lived the era of the blockade.”—Reuters

Keffiyehs and Controversy as Yasser Arafat Museum Opens in Ramallah