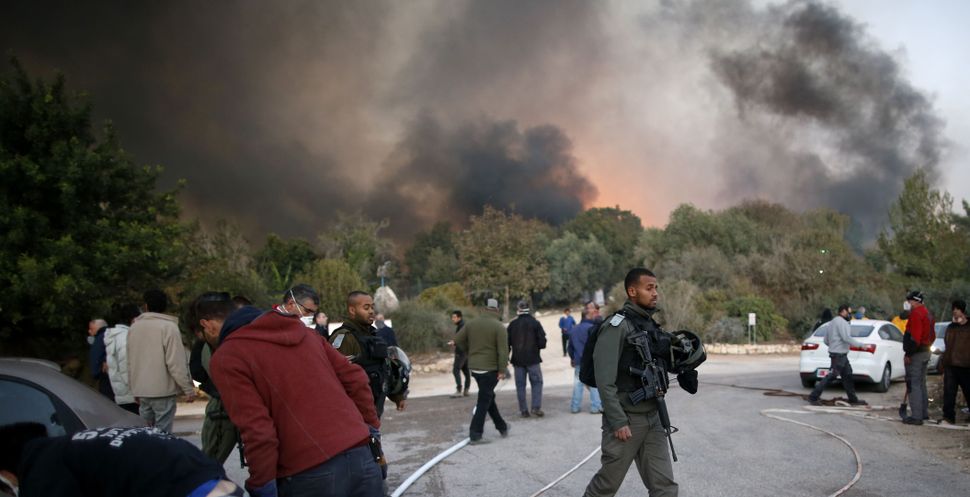 Netanyahu made the call on Saturday night to Abbas, identified by his nom de guerre Abu Mazen in a statement issued by the Prime Minister’s Office.

The Palestinian Authority sent eight fire trucks and about 40 firefighters.

The Palestinian firefighters worked to tamp down fires in Haifa and along Route 1, the main Jerusalem-Tel Aviv highway. They also helped put out fires in the West Bank settlement of Halamish, where dozens of homes were damaged or burned to the ground.

Twelve countries sent planes and firefighters to assist in putting out the fires.

The fires were by and large extinguished by Saturday night.

Israel’s Cabinet held its weekly meeting in Haifa to show support for the thousands of people displaced by the wildfires that ravaged Israel in recent days.

“This is our message to all Israeli citizens whose homes and property were damaged in the fire: We will help you rebuild your homes and your lives as soon as possible and this is the main purpose of the special cabinet session today in Haifa,” Netanyahu said at the beginning of the meeting on Sunday, adding that the government plans to “cut through the cruelty of bureaucracy” in order to help people get on their feet again.

Most of the fires that swept across the country in recent days have been extinguished, according to reports, though several small fires cropped up on Sunday and more could be expected.

Netanyahu said at the meeting that the fires, many of which officials blame on Arab arson attacks, are worse than “other terror attacks.”

During the meeting, Netanyahu announced that he was working to establish a multinational firefighting force, which also would make group purchases of expensive firefighting equipment. Netanyahu said he had spoken to officials in several countries and had found “a great interest” in the idea.

Netanyahu also thanked the countries that sent aid and aircraft, pilots and firefighters to help in halting the progress of the fires. He also thanked the Israeli firefighters, as well as police, Magen David Adam, the Israel Defense Forces Home Front Command, the rest of the rescue forces, and saluted their courage, as well as acknowledging the swift response of local authorities and average Israeli citizens who opened their homes to the evacuees.

He added that the conditions of this fire were much more complicated than the Carmel forest fire in 2010, in which 44 people, many police officers, were killed.