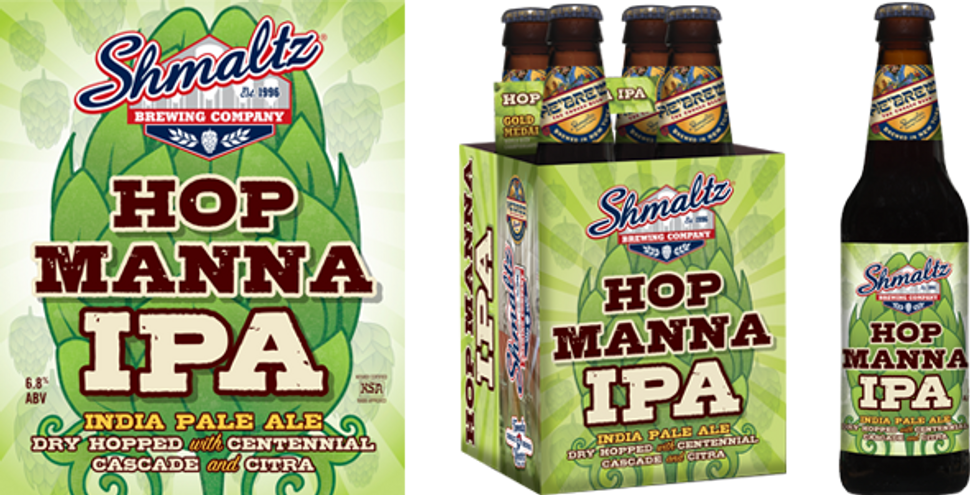 Shmaltz Brewing Co says some of its beer names, including several with Jewish themes, “can be a bit unorthodox.” Now a large California winery wants one of those names to be reformed.

Sutter Home Winery Inc sued Shmaltz late on Monday, accusing the brewery of infringing its “Menage a Trois” trademark by selling a 12-pack of its beers with the “MANNAge a Trois” name.

Shmaltz, whose beers include the He’Brew line, uses MANNAge a Trois for the sale of its Hop Manna, Hop Mania and Hop Momma India pale ales.

But Sutter Home, perhaps best known for its white zinfandel, called the name “confusingly similar” to Menage a Trois, which it said it began using in 1997 and trademarked in 2006.

Sutter Home said it has sold more than $1 billion of Menage a Trois red, white, rose and sparkling wine since 2009, including over 32 million bottles worth in excess of $193 million last year, and spends millions to promote it.

“Plaintiff owns extremely valuable goodwill in its Menage a Trois mark and the mark has extraordinary financial value,” and Shmaltz should not “unjustly benefit from such association,” Sutter Home said in its complaint.

The lawsuit seeks triple and punitive damages, and a name change. It was filed in San Francisco federal court.

Shmaltz and its lawyer did not immediately respond on Tuesday to requests for comment. The company is based in Clifton Park, New York.

There were more than 4,200 U.S. craft breweries last year, according to the Brewers Association, and the proliferation has resulted in many lawsuits over beer names.

Upon realizing they both sold Belgian-style ales called Salvation, they blended them to create Collaboration Not Litigation Ale.—Reuters