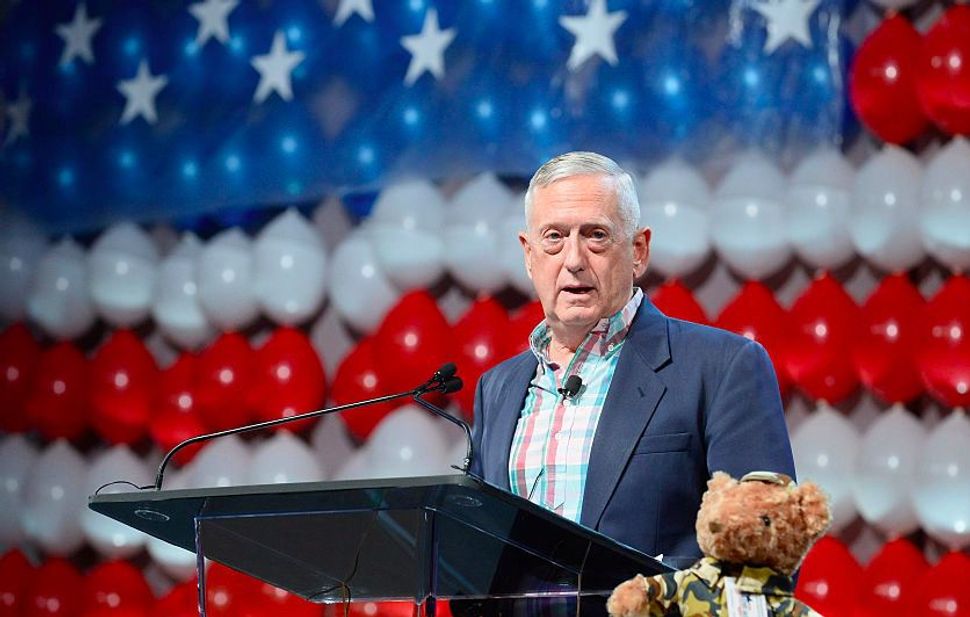 WASHINGTON (JTA) — President-elect Donald Trump said he would nominate as defense secretary Gen. James Mattis, a pick that has already stirred controversy among right-wing pro-Israel groups, with some lamenting the choice and others praising it.

“We are going to appoint ‘Mad Dog’ Mattis as our secretary of defense,” Trump said Thursday at his first post-election rally, in Cincinnati, and using the nickname for the retired Marines general.

Late last month, when it first emerged that Trump was considering Mattis for the job, the Zionist Organization of America said it would oppose the pick, citing a 2013 appearance at the Aspen Security Forum shortly after he retired as chief of the U.S. Central Command.

“I paid a military-security price every day as the commander of CentCom because the Americans were seen as biased in support of Israel,” Mattis said then of his job, which involves interactions with America’s Arab allies.

He also warned that the United States urgently needed to press the Israelis and the Palestinians to advance to a two-state solution.

“Either it ceases to be a Jewish state or you say the Arabs don’t get to vote — apartheid. That didn’t work too well the last time I saw that practiced in a country,” Mattis said.

The ZOA said in its statement that Mattis’ remarks were “hostile to Israel, and revealed a lack of appreciation for and understanding of the extraordinary value to American security resulting from a strong American-Israeli alliance and a secure Israel.”

The rebuke drew an unusual defense of Mattis from another right-of-center Jewish group, the Jewish Institute of National Security Affairs.

Emphasizing that it does not endorse candidates, JINSA said it understood objections to Mattis’ remarks at Aspen, but commended him for his posture on broader Middle East issues, particularly his vehement opposition to last year’s deal between major world powers and Iran trading sanctions relief for a rollback of Iran’s nuclear program.

“General Mattis has notably and indisputably distinguished himself in advocating for a more robust U.S. military posture to counter, contain and deter Iran, even at the peril of his military career, and its importance to American security and the restoration of America’s position in the Middle East – views JINSA has strongly propounded,” its statement said, alluding the reports that the Obama administration ousted Mattis because of his opposition to the deal then emerging with Iran.

More recently, according to LobeLog, a Middle East analysis website, Mattis in April said in an appearance at the Center for Strategic and International Studies that there was “no going back” on the Iran deal as long as the country observed its terms. He continued to maintain that Iran was the “single most belligerent actor in the Middle East.”

Trump himself has said the deal is the worst he has ever examined, but also has delivered mixed signals on whether he would pull the United States out of the agreement.

A former senior staffer for Obama’s National Security Council, Steven Simon, told The Washington Post that Mattis had earned the respect of the Israelis by frequently visiting Israel during his CentCom command, even though the country was not in his purview. Military relations with Israel are the province of the European Command.