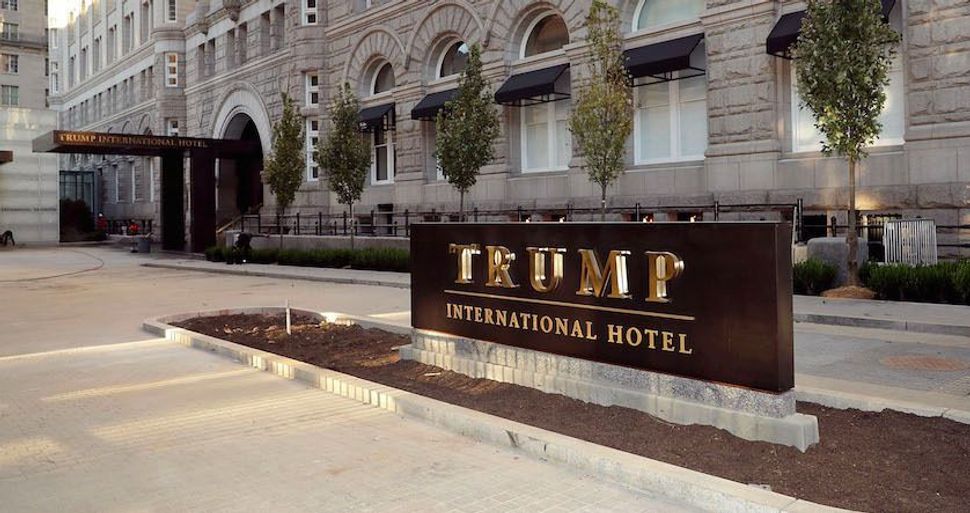 (JTA) — Eight liberal members of the Conference of Presidents of Major American Jewish Organizations will not attend its Hanukkah party because it is being held at a hotel owned by President-elect Donald Trump.

The Union of Reform Judaism, the Central Conference of American Rabbis, the National Council of Jewish Women, Americans for Peace Now, Jewish Women International, HIAS, Ameinu and the Workmen’s Circle have all said they will not attend the Dec. 14 party at the Trump International Hotel in Washington, D.C.

Some of the groups cited the bigotry they associate with Trump’s campaign in explaining their absence, while others pointed to the conflicts of interest posed by the president-elect’s far-flung business holdings. Two groups, Americans for Peace Now and the Jewish culture and social justice group Workmen’s Circle, also cited concerns about the party’s co-host, the Embassy of Azerbaijan.

“We would hope that the COP will be an honest broker in allaying the fears so many of us have about the incoming administration,” Nancy Kaufman, the CEO of NCJW, said in a letter Monday to Malcolm Hoenlein, the conference’s executive vice president.

“Until and unless the president-elect sorts out his many conflicts of interest, it would be wise for us to stay neutral and not inflame the conflict by having an event at the Trump Hotel in D.C., which we all know is wrought with very serious questions,” she said.

HIAS, the lead group advocating for immigration reform and refugees, said its principal concern was Trump’s stoking of fears about refugees during the campaign. “Welcoming refugees is HIAS’ mission and a fundamental Jewish value,” said its president, Mark Hetfield. “Until HIAS gets a sense as to where the Trump administration stands on welcoming refugees, we do not wish to celebrate any Jewish holiday in a forum which is named for him and from which he profits.”

Hoenlein did not respond to JTA’s request for comment. But last week, when JTA first revealed the invitation, Hoenlein said that the venue was chosen not by the conference but by the Azerbaijani embassy.

“The embassy rented the room, they needed to do it because it had to be near the White House,” Hoenlein said, noting that the Obama administration’s final Hanukkah party would be taking place the same day.

Hoenlein said using a Trump property should not taint anyone who has business with the administration.

“You think that Trump knows who rents a room in his hotel and that influences how we represent to him?” he said.

Former top ethics officials in Republican and Democratic administrations have said that Trump’s holdings will pose a conflict when he assumes the presidency next month, as foreign entities may seek to solicit his favor by doing business with his properties.

Trump’s transition team has said he divested himself of all his stock holdings in June. Trump has also said he will soon reveal further details of how he intends to separate his business interests from his presidency.

The Union for Reform Judaism, like the NCJW, said it was concerned with the propriety of doing business with a Trump property.

“Especially while the president-elect himself is still working through the implications of holding the nation’s highest office while presiding over a company with widespread holdings, it would have been far preferable to choose one of the other approximately 3,000 other possible locations in downtown Washington,” Jacobs said. “If the conference is having that much trouble finding a non-political location, the URJ’s conference staff would be delighted to help.”

Norm Eisen, a former top ethics official for the Obama administration, said the problem in this instance was Trump — not those who patronize his businesses.

“The solution to these kinds of issues is for Trump to divest through a blind trust, not to target or condemn those who patronize the hotel,” Eisen told JTA. “While I wouldn’t go there, I wouldn’t under these circumstances criticize others for doing so. The problem here is Trump’s.”

Lori Weinstein, the jewish Women International CEO, said her group had concerns with potential conflicts between Trump’s businesses and his role as president, and also noted that this was the first time in recent memory that the Conference of Presidents had hosted a Hanukkah party in Washington.

“Not only is it most unusual for the Conference to host a holiday event in D.C., but the choice of venue, still under the active management of the president-elect, and the source of an ongoing litigation, is an unwise choice of venue,” she said in a statement.

The Central Conference of American Rabbis, the Reform movement’s rabbinical association, noted the concerns about the incoming administration, and referred to the bigotry it said Trump normalized during his campaign and with his choices for top advisers.

“Especially as representatives of a community that has been so deeply impacted by the history of both the Holocaust and immigration, we believe that all Jewish groups must fiercely and consistently oppose any normalization of bigotry,” the group said in a statement Wednesday.

“Certainly, the theme of the Hanukkah party, ‘freedom and diversity,’ is at odds with the language we are hearing from Mr. Trump’s inner circle and appointments,” the statement said. “Until Mr. Trump denounces the anti-Semitism, racism, homophobia and sexism that have plagued his campaign and his transition, we join with our colleague Rabbi Rick Jacobs of the URJ in asserting that this is an inappropriate venue for a Conference of Presidents event.”

Last week, at his first major rally since his election, Trump condemned “bigotry and prejudice in all of its forms.” His campaign has said that previous comments made about Mexicans and Muslims, the disabled and women, as well as his use of themes and imagery that Jewish groups found unsettling, have all been misconstrued.

The Workmen’s Circle, which promotes Jewish culture and education, also cited what it said were troubling aspects of Trump’s campaign in a letter to Hoenlein. “His presidential campaign platform included a Muslim Registry and a ban of Muslims and others from immigrating to the United States,” the group said.

“His rallies have included Nazi salutes, and amid this climate our country is now witnessing a significant increase of anti-Semitic acts,” it said. “All of this is happening without any attempt by Trump to stop the hate speech his campaign actively propagated.”

Jewish organizations have previously co-hosted events with autocratic countries that otherwise have a good record of protecting their Jewish communities or maintain close ties with Israel. Azerbaijan has done both.

Israel and Azerbaijan have grown closer in recent years. Azerbaijan sent a firefighting plane to help quell forest fires last month in Israel and Israeli Prime Minister Benjamin Netanyahu has announced plans to visit the country soon. Azerbaijan has also been protective of its Jewish community and taken steps to preserve their heritage.

Also weighing in with a statement was the New Israel Fund, a funder of social justice causes in Israel, which is not a constituent of the Conference of Presidents.

“Any organization that chooses this moment to throw a party at the Trump hotel is utterly out of touch with the majority of American Jews,” said CEO Daniel Sokatch.