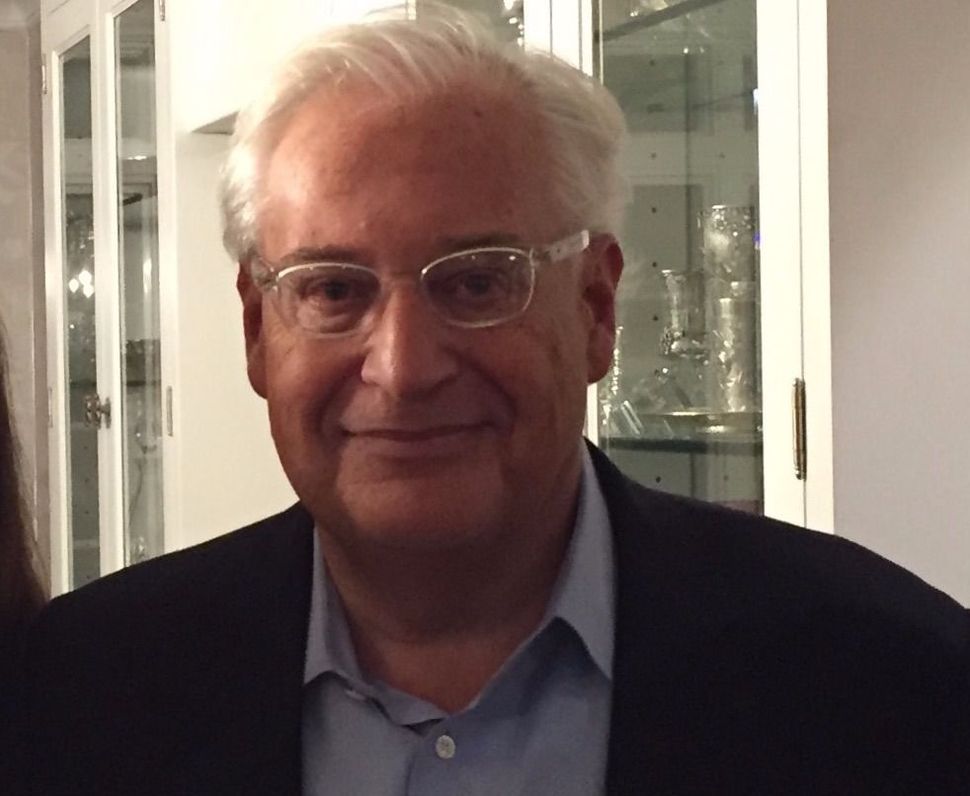 — Dovish Jewish groups spoke of their concern over Donald Trump’s nomination of David Friedman as U.S. ambassador to Israel, but their more hawkish counterparts celebrated it as momentous.

Friedman, a bankruptcy lawyer who has for years worked for the Republican president elect and his real estate development business, has expressed hardline right-wing views on the Israeli-Palestinian conflict, including support for construction in settlements and frustration with Israel’s perceived failure to jail for treason Muslims who engage in alleged incitement.

In a defiant Twitter message on Thursday about the announcement on Friedman, Jeremy Ben-Ami, the president of the left-leaning J Street group, wrote: “Trump’s pick of Friedman for Israel Amb[assador] is anathema to values that underlie [the] U.S.-Israel relationship. We’ll fight this with all we’ve got.”

Rabbi Rick Jacobs, the president of the Union for Reform Judaism, said the appointment “exacerbated” concerns that his group raised during the presidential campaign over statements by Friedman questioning the suitability of the two-state solution for resolving the Israeli-Palestinian conflict.

Jacobs wrote that “only a two-state solution will allow Israel to remain both Jewish and democratic while also addressing the legitimate aspirations of the Palestinians,” adding: “To our great concern, it appears that Mr. Friedman does not share that commitment.”

The Zionist Organization of America, which has more hardline positions on the conflict, celebrated the appointment, with the group’s president, Morton Klein, saying in a statement that Friedman “has the potential to be the greatest US Ambassador to Israel ever.”

Friedman “has a powerful grasp of Israel’s defense needs, the dangers they face, and the danger now of a Hamas/P.A. State,” Klein wrote about the Palestinian Authority. “No previous ambassador appreciates the political, historic, legal, and religious rights of the Jews to Judea, Samaria, and Jerusalem like David. Yet he respects and understands the beliefs and hopes and dreams of the political left in Israel and America. This, in addition to his heartfelt love of Israel and all its people, makes him uniquely qualified for this position.”

Early reactions to the appointment by Israeli politicians included reference to the fact that in their announcement of the appointment, the Trump transition team said Friedman – who like the incumbent ambassador, Dan Shapiro, is Jewish and speaks Hebrew – intends “to work tirelessly to strengthen the unbreakable bond between our two countries and advance the cause of peace within the region, and look forward to doing this from the U.S. embassy in Israel’s eternal capital, Jerusalem.”

Congress recognized Jerusalem as Israel’s capital in 1995 and mandated the move of the embassy from Tel Aviv to Jerusalem, but successive presidents have exercised a waiver in the law, citing national security interests. U.S. security officials believe that moving the embassy to Jerusalem, a city holy to Christians and Muslims as well as Jews and claimed by the Palestinians as their capital, would precipitate anti-American violence in the region and beyond. But Trump has vowed to move the building.

“I look forward to working with David Friedman, a great friend of Israel, in his rightful office in our capital, Jerusalem,” wrote Yair Lapid, a centrist opposition politician who used to serve as Israel’s finance minister.