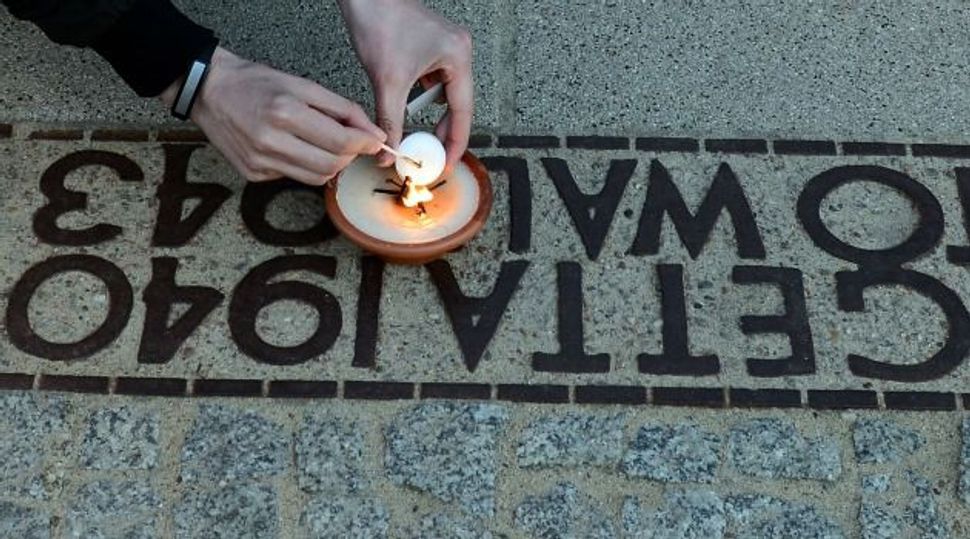 Opening Day: The first visitors got to see the Polish Museum of Jewish History, which opened as Warsaw marked the 70th anniversary of the Ghetto Uprising. Image by getty images

WARSAW, Poland – The Jewish Community of Warsaw is alleging that the Polin Museum of the History of Polish Jews allegedly violated its copyright on translations of historical texts.

According to information provided by the Museum, the community has called in a court filing to remove fragments of translations of historical texts from the Museum’s website, to pay the Warsaw Jewish community $7,500 and to issue a written apology.

Anna Chipczynska, president of the Jewish Community of Warsaw, believes that the creation of the museum limits the activity of Jewish communities in presenting historical events to visitors. In a December 2015 interview for “Plotkies,” the Polish language magazine of March ’68 immigrants, she said that “there is a great risk that in the future, focusing on this educational institution as a Polish visiting card to the world  will lead to the collapse of (Jewish) communities or to an international scandal.” In her opinion, the Polish authorities should focus more on the country’s cemeteries and synagogues.

Jakub Wozniak, head of the communications department of the Polin Museum, believes that the activities of the museum do not limit the activities of Jewish communities and the museum supports the communities, for example, with the Virtual Shtetl website and joint initiatives such as the “joint ticket to Jewish history” map of Jewish Warsaw. “We have very good relations and maintain regular contact with representatives of the Jewish community in Poland,” Wozniak told JTA.

The Jewish community’s lawsuit is about translations by Anna Cialowicz and Aleksandra Geller of four fragments of historical Yiddish articles published on the community’s website which were then posted on the website of the Museum.

Jakub Wozniak told JTA that the community demands the removal from the museum’s website of one article translated by Cialowicz and removal of three films published on the Museum’s YouTube channel where the museum used translations of three articles from the Jewish community’s website.

This is not the only lawsuit related to alleged copyright violation by the Polin Museum. On Oct. 14 in District Court in Warsaw, a lawsuit was initiated by Cialowicz, who works for the Jewish community in Warsaw, against the Polin Museum and Agora SA publisher for the book “Walking in Jewish Warsaw,” which Cialowicz alleges contains her translations of Yiddish articles and omits her name. The next hearing in this case is scheduled for Jan. 24, 2017.

For Hanukkah this year, Polish Jewish organizations decided to organize separate events. Chabad Lubavitch joined by the Jewish Social-Cultural Association in Poland, or TSKŻ, and From the Depths is organizing a Hanukkah concert in the Polin Museum on Dec. 29. One day before, Chabad will hold, as it does every year, a Hanukkah candle lighting ceremony in the Polish parliament.

The Jewish community is planning to hold a Hanukkah Ball for its members and their families, but has not provided details due to security reasons.